Ordinary people have been fined by the Police for going out to buy alcohol as that (debatably?) is deemed to be ‘non-essential’ supplies, so is against the lockdown rules. However, the rich and over-privileged elite, together with wealthy second-home owners, are being allowed to blatantly flaunt their position and get away with major breaches of the rules without being penalised by the police – they need to be visited by the Police, their lame excuses debunked, and the perpetrators duly fined (and not simply chastised and issued with a formal warning). Examples in the public domain include: 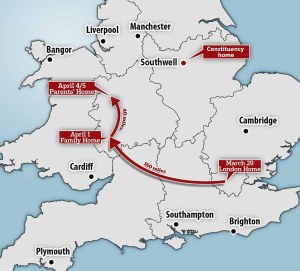 Furthermore, despite the fact that he has spoken at the daily Downing Street press conferences and is a key member of the Cabinet and had urged others to stay at home for “all bar the most essential activities”, and all travel to second homes was banned, he has also been seen on his elderly parents’ front lawn in Shropshire [150 miles from London, 100 miles from Southwell, 40 miles from Herefordshire] a week ago at a weekend, claiming the excuse that he was delivering medication and other supplies (despite the fact that his parents were already receiving help with essentials from the local community, raising questions over his honesty about the necessity of his trip – Jenrick is accused of “selfish-arrogance” and some would say that the minister’s actions were “idiotic”. [The Government’s guidelines state you should not visit anyone who lives outside your own home, including elderly relatives, you are allowed to “leave your house to help them, for example by dropping shopping or medication at their door (THAT means NOT visiting them nor being on their lawn). How can he stay in post as a Cabinet minister when exposed as a fibber?

Although the UKs lockdown rules aren’t really all that severe, nevertheless they do make life very difficult for ordinary residents in terms of seeing close family, socialising, shopping, exercising, dog walking,  relaxing, following interests, holidaying, or just even enjoying life in general. The British population is hanging in there, but the situation is made intolerable when those better off, or in exalted positions, already enjoying a higher lifestyle and more able to cope with restrictions, are allowed by the authorities to simply drive a coach and horses though the lockdown regulations – the government needs to put an immediate stop to it to preserve  some semblance of equality in our diverse society, don’t you think?

However, without penalty rich people are flocking to their holiday homes in the countryside or by the coast, or wherever it may be, to spend their time in lockdown during the coronavirus pandemic.

Aristocrats are avoiding the city by staying at their gorgeous countryside homes and millionaires, the rich and wealthy families, desperate to escape the urban living coronavirus crisis in London, are fleeing the infested city for £50,000-a-month rented rural retreat sanctuaries in the country

British estate agents have been flooded with requests from the super-rich searching for mansions with bunkers, Cotswolds manor houses and uninhabited Caribbean islands to buy.

Aristocrats, heiresses and society models are avoiding busy cities like London by staying at their gorgeous countryside homes instead – including the likes of Emma, Viscountess Weymouth [the fourth rank in the British peerage system, young wife of Longleat estate’s Ceawlin, Viscount Weymouth], and also the daughter of Scottish peer James Charteris, the 13th Earl of Wemyss and 9th Earl of March, posh wild child, British fashion model, DJ, and musician Lady Mary Charteris.

Then there’s the example of a private jet of London super-rich being sent home after flouting lockdown to visit a luxury Cannes villa in southern France. The group of seven men in their 40s and 50s and three women in their 20s had arranged travel from London to Cannes – but their private jet was stopped at Marseille-Provence and they were intercepted by police and forced to return to the UK.

We even have our Prime Minister Boris Johnson setting completely the wrong example to the Country. Not only did he irresponsibly not follow his own rules so caught coronavirus HIMSELF and infected others, then jumped the queue to be tested ahead of people including NHS staff, but after hospitalisation he didn’t “stay at home” as everyone is told to do, but he has travelled 40 miles into the Buckinghamshire countryside to convalesce at his grace and favour posh second home of Chequers, a lavish country house estate in part of the Chilterns Area of Outstanding Natural Beauty, where traditionally the UK Prime Minister can unwind or entertain high-profile guests, and that was despite the fact that the published rules don’t allow the rest of us, whether unwell or otherwise, to debunk and go off somewhere nice to relax or recharge our batteries, do they?

At the other end of the line, parties are out of control in Manchester with some 660 house parties in past few weeks. Greater Manchester Police has warned people to stay inside over the bank holiday weekend after that large number of house and street parties which have been held during the coronavirus lockdown. The force said there were 1,132 incidents reported across the whole of Greater Manchester between Wednesday, 25 March and Tuesday, 7 April. This included 494 house parties, 166 street parties, 122 group gatherings for sporting activities, 173 gatherings in parks and 112 incidents of anti-social behaviour or public disorder.

[With luck a new CHANGE organisation (change.org) petition (http://chng.it/cmphJBWh) regarding this specific issue will galvanise appropriate action from MPs at Westminster, but don’t get your hopes up anybody]