Someone two days ago read this post I had published 5 years ago and I thought it might be worth others reading it and thinking about it as well?

American Kim Peek was quite a ‘different’ personality indeed in the flesh. He had both amazing ability and commendable insight about life.

He had a strange capacity to read two book pages separately with each eye, and had probably the most astoundingly powerful memory ever encountered. Mr Peek could speed read & memorise books (some twelve thousand of them at least), and they say could recall the day of the week for any birth-date together with the newspaper headlines for that day.

We might, in this divisive world of ours dwell on his advice that ‘recognising and respecting differences in others, and treating everyone like you want them to treat you will help make our world better for everyone’. He also observed that ‘no battle is ever won… the field only reveals to man his own folly and despair, and victory is an illusion of philosophers and fools’.

Oh yes, Kim was a very special person, a very unique person, a person of immense abilities. Oh yes, we should mention that he was severely disabled, severely handicapped, severely congenitally brain damaged.

[He was of course the inspiration behind the eighties film ‘Rain Man’ with Dustin Hoffman playing his character].

Society is strangely ignorant about the disabled and astoundingly discriminately about them as well isn’t it? Why is that? Well it emanates, like most prejudices, from being badly informed of course. You see it is not something that we are all taught about in the home as we grow up, or at school when we are educated, nor even as we subsequently go about our normal life later, in work and recreation, is it? Like sex it is a topic that is not openly talked about, explored, or understood – brushed under the carpet no less.

It would be very strange though if any of us actually could go through life without personally encountering the disabled (after all there are at least ten million in Britain) – so then often we are ill-equipped to deal with situations arising aren’t we? Distressingly, some of us will have a Partner who suffers a heart attack, a son or daughter who suffers a brain haemorrhage, a child who gets a cancer, a brother or sister injured in a road accident, a cousin who suffers a traumatic sports injury, a family member who becomes severely mentally ill – all though still loved, cared for, worried about, fussed over, but then different, disabled.

Disability however comes about in different circumstances for different people. Some of us are born with a disability – either because of a genetic variation, or complications in development (due to impact of disease or drugs for example), some of us suffer an acquired disability in life (through accident of illness perhaps), and some of us will become disabled due to the aging process (dementia becoming more prevalent these days as people live longer). So-called ‘able bodied’ folks need to be aware that they themselves, or their loved ones, can easily cross the divide and join the ranks of the ‘disabled’.

An astounding change in respect for the disabled came about during the 2012 London Paralympics. The watching British nation, like many others, was enthralled and spellbound with the impressive physical & mental competitive exploits of the nearly five thousands athletes, taking part in a mega multi sport event, from over one hundred and fifty countries– many competitors with quite debilitating conditions.

We often forget don’t we that the successful development of life itself has been based on ongoing generations un-expectantly throwing up ‘variations’ in new generations? This natural technique allows creatures to adapt to new circumstances and new environments. We know for instance that mankind has changed considerably over millions of years. Even in our own lifetime we can witness the dramatic changes that occur in other species that have an extremely short reproductive cycle – like say bacteria that develop to become resistant to antibiotics that we have developed to eradicate them. We shouldn’t be surprised therefore that we sometimes come across differences in human developments- what we chose to judge as ‘damaged’ because it isn’t the ‘norm’.

We tend to be wary and afraid of anything that isn’t the norm don’t we? Oh, and we are particularly uneasy about anyone with a mental issue aren’t we, so we react accordingly? A charity has recently warned that adults with autism are the victims of abuse, even by those they trusted, and as a consequence simply ‘stay at home’ – are we proud of that?

One of the saddest areas of life is children ‘unborn’ with the genetic condition (disorder?) of Downs’s syndrome. These days the hospitals can detect the condition, or risk, in the womb. It has become an increasingly common condition as women pursue other interests and delay having their children (three times the likelihood of a Downs baby in the mid-thirties compared to the mid-twenties). Fear results in nearly up to a thousand terminations a year in the UK. The stories of those that are born though can be heart-wrenching – parents who say that their Downs child is the most loving and rewarding gift they could ever imagine; the mother who says she could not have known what a good life her Downs son could lead. It is nevertheless clear that having, caring for and bringing up a Downs child is extremely hard work – perhaps which is why the rewards can be so great?

The problem with society’s tagged as ‘disabled’ people, is that they can’t fit into society and have a life, can they? Blind people can’t play football can they? YES. People with no legs can run and race can they? YES. People with no arms can’t swim can they? YES. People disabled can’t become public figures can they? YES, because we all know about – blind as a bat David Blunkett an ex-Foreign Secretary et al & Sheffield MP (and a bit of a naughty one on the side), or crunched-up wheelchair bound with no speech, world renowned Cambridge scientist Steven Hawkins, gaining worldwide awards galore, but with motor-neuron decease, or deaf as a post (following an operation) Jack Ashley MP & Lord a tireless disability campaigner, or countless others making their contribution, as best they can, to society and making their way through life with mixed success – like the rest of us surely?

In history we have the psychiatrically mentally ill depressive but possibly the greatest painter Van Gogh (whose disability did for him – he shot himself), or deaf Beethoven who arguably produced his greatest musical works despite having lost his hearing, or physically deformed Joseph (John) Merrick known as Elephant Man who became a high society celebrity but died trying to sleep like other people lying down.

In our household in times of trials and tabulations someone ends it all by saying remember “No arms and legs” which stops us all off short. It is a sobering thought when one is feeling hard done-by isn’t it?

[Joanne: extraordinary, awe-inspiring, humbling, born with no arms or legs… but with the heart of a lion, and now grown up] 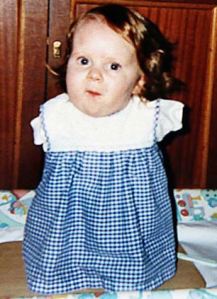