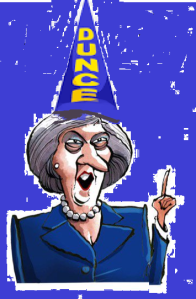 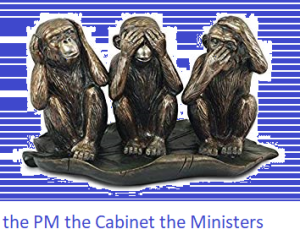 PM Theresa May has brought her “meaningful vote” motion to the floor of the House of Commons three times:

Now, ‘apparently’ Speaker John Bercow has upset the apple cart by making a statement yesterday and ruling that the present, clear, and published parliamentary proceedings, prevent blackmailing confidence trickster May from presenting the same proposition again and again – if something is voted down an identical motion can’t be voted on again until the next parliament.

Erskine May: ‘Treatise upon the Law, Privileges, Proceedings and Usage of Parliament’ [first publication in 1844]; the book is the definitive guide to parliamentary procedure and constitutional conventions, so has frequently been updated – the 24th edition was published on 30 June 2011 [the 25th edition, to be published on 28 May 2019, will even be freely available online (indeed this work has been influential elsewhere and particularly in countries using a Westminster type system)]

Well you see, May has only been an MP for 22 years, including serving as a shadow minister for 11 years (7 posts), a government minister for 6 years (4 posts), and prime minister for 2 years – so she, like the rest of the disloyal Cabinet and her Remainer ministers just didn’t know about the basic rules, eh?

However, both she and the other proven incompetent ministers, were in the Chamber last Thursday when an opposition single MP tabled a motion to prevent her presenting her meaningful vote again – because it was against the ‘Erskine May’ rules. As Bercow responded by saying that he WOULD be making a ruling concerning that matter later, the motion was withdrawn

So, it would seem that not only is the May Government very ignorant, but it is completely deaf as well – or are its MPs just stupid believers in myths, so are a bunch of frightened ostriches burying their heads in the sand in the hope that trouble will pass them by?

Oh yes, No10 have disingenuous announced that it had had NO warning of this move to deny May another chance of tabling her motion, and that everyone there had been caught by surprise – claiming ambush it seems, despite the clarity of the rules, the pre-warning of precedent, the impending judgement of the Speaker, and the glaring fact that the pitfall was widely exposed in the media over the weekend

As is delusional May’s normal modus operandi, she simply ignored everything going-on, brushed aside all BIG setbacks, and ploughed-forward regardless – in her usual way secretly plotting in the bowels of Downing Street to replace BREXIT with BRINO (Brexit in name only) and find ways of coercing MPs to vote for her despicable Withdrawal ‘deal’.

The Government troops are on the march to transfer to Bercow, May’s totally wretched blame for the fiasco of her devious new plans lying in tatters. Anger is directed at Bercow describing him as arrogant and hypocritical simply because he has done his duty – that is NOT to say that he isn’t a biased bugger, both against BREXIT [he is a committed Remainer after all], and also anti the May Government [well its derisory treatment of parliament has been despicable]

May has as political scorched earth policy of targeting anything that might be used to cower those who oppose her will. She like the dictators of old is DETERMINED to unilaterally control people and events – just as evil disputed Venezuelan President Maduro does, and she is also one who doesn’t give shit about the devastation policies inflicted on the Country and its peoples, does she?

Regarding BREXIT with typical isolationism, May insists that it is her way or no way. So far she has failed in her quest to achieve her way, and a solution is nowhere near evident

The so-called deal is not any kind of deal, as the deal that has been the subject of abject negotiation and May’s unwarranted concessions over the past 2 years, was to agree a ‘trade deal’ – that failed utterly, and no such deal will EVER be secured over the next 2 years, except by giving-in to the unacceptable demands that the EU will make if we now accept the Withdrawal agreement. The UK will HAVE to accept whatever the EU decides to include as the government [whoever led by] will have no choice as it has to escape the Backstop [that is precisely why the EU put it there and won’t remove it]

Even previously committed Remainers now say that they not only support BREXIT but want us to Leave on a ‘No Deal’ basis – they have seen what the EU is like, you see? Those who want a second referendum should be carefully for what they wish for – the result would be an even GREATER vote to LEAVE.

The PM has abused the ministerial power she has to derail BREXIT, and to threaten BREXITEERS to do just that very thing, if they refused to vote her way – indeed she has already embarked on that mission, in betrayal of the British people, and will on Thursday seek at the EU to cancel leaving on 29 March and delay the UK’s departure until June, but only then if the MPs who describe her Withdrawal deal as rubbish, surrender and vote for it next time round – otherwise she says she will kick BREXIT into the long grass so that the Establishment, BIG business,  and the Remainers achieve the holy grail of staying in the EU

[Valentine’s Day 2019: Commons motion to extend article 50 (a move intended to avoid parliament from taking steps to prevent a ‘no-deal Brexit’ by extending any re-negotiating period with the EU) – DEFEATED by 315 to 93

14 March 2019: Commons motion PROPOSED BY MAY HERSELF to extend article 50 (a move intended to force parliament to accept her deal) – APPROVED by 412 to 202

WHAT A FIASCO OF DECISION MAKING, eh?]

A large number of committed Leaver MPs have been bullied and suffered coercion, blackmailed, bribed, and feel cornered, so say that they will hold their nose but will have to capitulate and vote for this disastrous unbreakable Treaty – history will show them no understanding nor kindness, will it? Accepting May’s proposal sells the UK down the river and belittles our world status, and her despicable use of blackmail and running the clock down for over 3 months since 11 December is disgusting. Politics is in the gutter and the Tory party is heading the way of the LibDems once BREXIT is over – and there’s no way that Corbyn is going to be voted into power, but the Conservatives will be punished when he and his fellow Marxists are gone from the scene

While May is intent on playing the blame game and putting Leaver MPs in the frame for BREXIT not going forward, it is ONLY she alone that can be or WILL ever BE held accountable for such an outcome – and it is one that will utterly destroy any semblance of a peoples’ democracy in the UK. ONLY the PM can by her own deliberate despicable actions halt BREXIT with now just 10 days to go – DOES SHE REALLY WANT THAT LEGACY?

The Government has no legal obligation to ditch ‘No Deal’ and only May can actually implement such backtracking which will smash the BREXIT the public voted for.

Therefore, the UK can and should leave the EU completely at 11.00pm  on 29 March, with a clean No Deal departure. May cannot get away with saying that such an outcome denies the will of Parliament, since that No Deal upshot was precisely what our Parliament voted for only a year ago [European Union (Withdrawal) Act 2018: failing obtaining an acceptable deal, no deal would result as the legal default outcome in UK and EU law].

Nevertheless, with May’s connivance last week the House of Commons voted to reject leaving the EU without a deal, but that vote is neither binding on the Government, nor has it any legal standing, and anyway should Remainer MPs [or a Remainer PM for that matter] really be allowed to overrule the democratic decision to disembark from the EU in the BIGGEST vote EVER?

[Ordinarily British people believe in our democracy, so voted for that in the Referendum and to successfully escape the EU’s controlling role and its destination of a federal Europe, which is indeed is something that doesn’t satisfy the British population but only the undemocratic elite]

One thought on “‘Theresa May’ Prime Minister 2019 in an attempted abuse of Parliamentary Practice is stuffed by ‘Erskine May’ Clerk of the House of Commons 1844 – it took the Government by surprise, eh?”