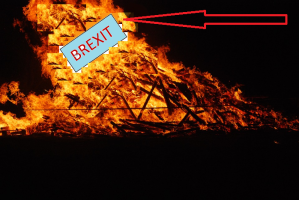 Three times now PM Theresa May has brought her dreadful Withdrawal Agreement to the House of Commons, and twice she has asked Parliament to vote for it and each time she has left with a flea in the ear – told in no uncertain terms that it was totally unacceptable to both Remainers and Leavers, and moreover that it did NOT deliver the EU Referendum’s decision to Leave the EU as she repeatedly claims in ‘the lie of the decade’.

She has been thwarted from foisting on the UK a so-called ‘Deal’ that isn’t even that, but just the ‘prospect’ of one if we stay under the control of the EU for a further 2 years (making 4 in all) without a voice, pay through the nose for the privilege, and abandon our sovereignty FOREVER.

What us ordinary voters just cannot comprehend is why Parliament has not called the Prime Minister to account for PERSONALLY negotiating an International Treaty that not only doesn’t pass muster, but is so lacking in merit that it suffered the BIGGEST voting defeat EVER experienced in our parliament. By failing to get her to explain herself, the Commons has simply allowed her to bring it back to the floor multiple times, hasn’t it?

Last night, May’s incompetence and lack of authority showed-up in spades, didn’t it?

Yep, she lost any semblance of being in charge as Prime Minister of our once great Country, when 4 members of her personally selected Cabinet put-up two fingers to her, and by abstaining, disgracefully mutinying, together with 9 other of her personally selected Ministers, and a further 17 Tory MPs also abstaining, inevitably brought the Governments house of cards crashing down

The Tory immoveable Remainer block has succeeded in exclusion of the ‘No-Deal’ BREXIT that was desperately needed to leave the all-conquering EU powered by Germany, with 27 enemy counties populating Brussels, that offers us only capitulation and lifetime servitude, while PM May has the backing of a parliament of despair, irresolution and self-interest, the backstabbing many, and that combined with powerlessness and a personal unwavering determination to relinquish the Country’s independence to the EU

[Back in July 1940, all-conquering Germany’s Hitler, with two thousand invasion barges stacked off the Dutch coast, that offered us only surrender or unending suffering, while PM Churchill had the backing of a parliament of hope, courage and self-sacrifice, the RAF few, and that combined with leadership and a personal unwavering determination to save the Country’s independence]

Conservative’s manifesto 2017 read “We continue to believe no deal is better than a bad deal for the UK” and that phrase was repeated another twice, whence 314 MPs were elected on that commitment, so how comes 17 Tory MPs vote against that and another 30 Tory MPs abstained, making it inevitable that their Government’s authority got trashed, eh?

One of the ‘Foul Four’ was Business Secretary Greg Clark and on Wednesday night he was on Preston, the weekly political discussion show, and he repetitively offered the lying and lame excuse for his despicable backstabbing, that “the Government NEVER intended to leave the EU with a No Deal” – so not only is he a bloody scoundrel, but he is a bleeding Cabinet minister who doesn’t know the Manifesto that got him elected, nor that his boss had repeatedly said ‘no deal is better than a bad deal’ [well that was until she had cobbled-up a really-really BAD deal, eh?]

We see fifteen percent of May’s MPs openly rebelling, including senior ones in government showing utter distain of the principle of ‘collective responsibility’ which is an essential element of government, yet gutless May is so witless and weak that she dare not do what is the normal outcome and sack the bastards

Oh yes, the Conservatives ‘committed BREXIT’ was finally given the last rights tonight, when our parliament threw British democracy onto the funeral pyre and voted overwhelmingly to seek a BREXIT delay from March 29 to at least June 30. She has relentlessly continued with her vile blackmail plot to force MPs to vote for her rejected Withdrawal Agreement. She will bring that back for the fourth time and third vote, next week with the further threat that the UK will remain in the EU for ANOTHER 2 YEARS at least – exactly what the Remainers have been working for since 23rd June 2016 in their quest to completely reverse the public’s decision to ditch the bloody EU

[Those in the EU are laughing their cotton socks off at us in Britain, and it is a time for us all to hang our heads in shame]

One thought on “The Country is in Turmoil, the Government is Incompetent, the Prime Minister is Delusional, the Cabinet is Defunct of collective responsibility, Tory MPs’ rebellious behaviour is Anti-democratic – any wonder BREXIT has been torpedoed by Remainers?”