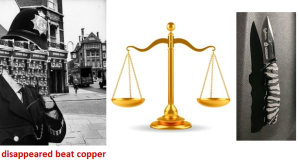 Over three years ago, a post here identified the problem of our police forces’ downward spiral caused by cutbacks [The UK Police ‘underfunded’ and ‘under resourced’….], and six months ago another post here covered the fact that the problems had got unbelievably worse, that knife crime was out-of-control, and it suggested the background reasons [England’s Police Force is being only farcically supported….]

For some unfathomable reason, those in power and accountable, have suddenly woken from their self-invoked states of extreme lethargy or sleepiness, to announce that there seems to be a problem with knife crime – well done, eh? This has all come about though only because the national news is currently full of reports of teenage victims and teenage killers – so it seems that many young people have to die before the Establishment listens, doesn’t it? Yep, but how many other people will die before anything effective is done about it – 300 victims a year for another 5 years, perhaps?

The problem we face now in the UK is that our once renowned UK Criminal Justice System has been shattered in every aspect and in every element that is needed for it to work and to keep our communities safe. What the System SHOULD do but now FAILS to do, is to determine what society will hold as a crime, deter potential criminals, catch those who are not deterred so commit crimes, and deliver due justice to those who are found to have committed crimes.

The reason for that abject failure though is glaringly obvious and very simple – it all has been starved to near death by lack of money and resources – the entire system is simply operating in a shutdown survival mode. Our whole society has been let down by those entrusted with the job of parliamentary governance. It is they who represent the population in the Westminster Parliament which is not only the supreme law-making body [or will be if BREXIT ever happens], but it allocates the money and resources to run the UK Justice System – which these days has become such low priority that drastic cuts have brought us to this crisis.

Oh yes, while the rule of law demands that justice be separated from politics, not only does that not operate rigorously, but it is the bloody politicians that tightly hold the purse strings which allows them to exercise overall control over the operation of the Criminal Justice system, and indeed it’s direction of travel.

The UK’s Criminal Justice System may have taken centuries to evolve but has taken only a decade to shatter. Who is to blame, what names are in the frame, then?

Well, we might as well start with ‘arch survivor’ Theresa May, don’t you think? If people imagine that the only things that she has cocked-up are BREXIT, the Government, the Conservative Party, and Parliament, dream-on everybody. Her fingerprints and DNA are all over the assorted crimes of the Home Office, where she lorded it for a 6 full years with instinctive secrecy and showed her preparedness for evading responsibility at every turn and delegating whenever things went awry [that allowed her to be one of Britain’s longest serving home secretaries], which indeed has been good experience to survive as a failing Prime Minister, eh?

Oh yes, she is proud of her success in ‘taking on the police’ and thoroughly undermining them [bet she won’t boast about that now that she has helped to make them ineffective, eh?]. It was under her watch that the Police suffered an unsustainable 20% cut in Whitehall budget funding, resulting in some 21 bloody thousand fewer police officers – any surprise in that having the smallest police force in decades, it has lost control of the streets, then? No, but in response to the violent wave of fatal stabbings, she lies that “there is no direct correlation between certain crimes and police numbers” [In open rebuttal, Met Commissioner Cressida Dick the UK’s top police officer, said there WAS a link between falling police numbers and a rise in violent crime (police recorded violent crime has doubled since 2010)]

She won on scaling back the use of ‘stop and search’, which was so blatantly successful in deterring the carrying of knives that the liberal ‘do-gooders’ said it was useless as NO ONE dared carry them, but now EVERYBODY carries them without compunction, don’t they? Yep, and they actually use them as well – 40 THOUSAND knife offences a year, no less? Will she remind the people about that as she laments the knife killings and crimes, do you think

She has just announced that there will now be a summit meeting of agencies at Number 10 about knife crime – the phrase “shutting the stable door…” comes to mind, doesn’t it?

Of course it was her expensive, unwarranted, and intended personal legacy reform of having elected police and crime commissioners, which has proved both divisive as well as demoralising senior police officers

No doubt she is probably equally proud she saw-off the American justice system to stop the deportation of a computer hacker to face trial there for the “biggest military computer hack of all time” – in a pretence that she believed in human rights, she decided he shouldn’t face justice as she didn’t trust our greatest ally’s justice system to keep him safe

Despite the Country facing its greatest threat from terrorism, she abjectly failed to get an indispensable counter-extremism bill on the statute book – that was purely because she is a pig-headed ‘non-listener’, who demanded it was her way or no way (just like she has done on BREXIT). Also, she caved-in to pressure from the do-gooder brigade, so scrapped existing plans to have a national identity card scheme, which would have stopped people using multiple identities and would have disrupted terrorists’ activities and boosted the fight against terrorism and organised crime.

She ‘correctly’ saw the EU Referendum as a political tightrope and death-trap so before it, she hinted that she was a Leaver who even was a potential leader of that campaign, but then with due loyally became a ‘reluctant’ Remainer, hence played a minimalistic part, but rode both horses by empathising how committed she was to withdraw from the European convention on human rights. Since becoming PM she has without warning continued to jump from the BREXIT thoroughbred to the Remainer nag and that is precisely why the Britain is up-the-creek-without-a-paddle at the EU

In 2012, she was the one that decided “to create a hostile environment” for illegal migrants that culminated in last year’s political exposure of the Windrush scandal concerning people who were wrongly detained, denied legal rights, and deported or threatened with deportation – she allowed Amber Rudd to carry the can for that disaster even though she was never even anywhere near let alone in the Home Office.

Despite reduction of net migration being a crucial government commitment, she completely botched it, blamed all and sundry for the repeative failures, and persistently got underlings to face the music in Parliament

Notwithstanding the verdicts delivered at Hillsborough inquest making an overwhelming case for similar public inquiry into 1984-85 miners’ strike, she pretended to support it but instead parked any decision and left it to her successor to announce there wouldn’t be one.

The other perpetrator of subliminal criminal acts against our Criminal Justice System is of course ‘King of Austerity’ George Osborne with his importation from ancient China of the cruel torture and execution of ‘death by a thousand cuts’, isn’t it?

With the connivance of May he cut twenty-five percent from the Home office funds used to run the Police, and when it came to the Justice budget he slashed it again and again, cutting even things like prison places which were already inadequate, and closed nearly a hundred courts and tribunals while integrating or merging over thirty more.

Well, the under-resourced Police are naturally now the front-line cannon fodder for what is happening on our streets with knife crime, but we know that those poor beggars are anything BUT to blame for anything, don’t we? Yep, and that is because the basic essential foundation the Force rests on has crumbled like a house of cards at its feet. While the Police (Territorial & Metropolitan) is indeed the central part of law enforcement in the UK (the function also includes the likes of the national crime agency and other national specialist units), without the effective operation of the Courts and effectiveness of the Prisons & Probation Service, law enforcement is up the creak without a paddle, isn’t it?

All the three interlinked elements of the Justice System have been brought to their knees and the crises at the end of the line have a totally debilitating impact at the front line, you see?

Starting at the backend then with the Probation service, what has happened is that swinging cuts with 30% staff cuts, have been compounded by a controversial and now devastatingly failed 70% part-privatisation, with the result it has become totally inadequate, so that that instead of criminals under supervision going straight, they are back at it – just serious crimes alone committed by offenders on parole have soared by 50% – rapes, murders and other serious offences like grievous bodily harm, sexual attacks, robbery, burglary, forgery.

Such failure not only increases violent and other crime but puts additional unmanageable pressure on the police, the courts, the prisons, and full circle back to the probation service, doesn’t it?

The Prisons are in crisis, have been part-privatised with dire results, and have also experienced years of under-investment with large spending cuts and cuts to staff numbers [7,000 prison officers less], resulting in prison safety deteriorating sharply, violence rates and drug use unacceptably soaring, smuggled drugs & weapons & illegal contraband including mobile phones rising steeply and being undetected, with consequently and disgustingly ten thousand assaults on prison officers, so we now have the most disturbing conditions ever seen in our jails.

Spending on prisons was cut by 20%, so is it any wonder then that they are unsafe or that experienced prison offices are resigning in droves or that prisoners are not being rehabilitated, is it? Moreover, we have more offenders than we can accommodate in prison and that is the sole reason that they are allowed out to reoffend when they have only served half or less of the sentence that the judge decided was their correct punishment and would act as a deterrent – it is now being proposing to stop prison sentences of up to 6 months NOT because that is RIGHT, but simply to cut numbers, eh? The impact of prison failures on the police, the courts, and the probation service, is obvious, isn’t it?

Then there is the dumbing-down of the Courts and consequently their essential support elements, which has meant that criminals are out on bail instead of standing trial

[The UK’s Criminal Justice is in freefall and it seems entirely unlikely that that it can be fixed short-term, and unless the government scrap the bankrupting idiot projects like Trident replacement and HS2, as well as ditching EU payments and foreign aid donations which we don’t control, IT WILL NOT BE AFFORDABLE, will it?]