Most British people will know of the Lake District in Cumbria, even if they have never actually been able to visit it – or perhaps they might know it better by its other titles of ‘The Lakes’ or ‘Lakeland’?

Whatever, it is undoubtedly a beautiful scenic mountainous region in North West England, and indeed while two years ago it gained UNESCO World Heritage Site status, don’t hold your breath anyone – because it’s in the verge of losing that very award which equates it with the likes of Machu Picchu, the Great Wall of China, or the Taj Mahal.

Why would that be you might wonder, eh? Well, it is because those charged with looking after it [the Lake District National Park Association (LDNPA)], seemingly is either too unconcerned or lazy or commercially driven, so couldn’t give a toss about performing that duty, and only pays lip-service to its priority task of preservation and conservation eh?

Well, the shit has well and truly hit the fan now, because World Heritage Watch has just issued last month a damning report on the current crass management of this heritage site, and have brought it to the attention of the World Heritage Committee, calling for it to intercede – that could well spell the end of the Lake District’s world status, couldn’t it?

You see, that status requires a site to remain an OUV, and the evidence is that the Lakes authorities are not only in violation of that requirement now, but are intent on making further breaches. It is noted that regulatory measures to protect beauty and tranquillity have been used by UK’s other National Park Authorities and it deplores the refusal of the Lake District National Park Authority to fulfil its statutory duty.

[OUV: Outstanding universal value, means cultural and/or natural significance which is so exceptional as to transcend national boundaries and to be of common importance for present and future generations of all humanity. As such, the permanent protection of this heritage is of the highest importance to the international community as a whole]

Now, the Lake Distract of three centuries ago, attracted as its early visitors only those who travelled for the education and pleasure of the journey, but since those distant times, it has become our most popular national park and holiday destination, famous for its finest scenery, greenest countryside, valleys, woodlands, fells and it’s grandest views with lakes, forests and mountains – so one of the best places in Britain, no less?

Oh yes, some 15 million visitors hit the Lake District each year, and while most of them do so to enjoy the breathtaking scenery, peace and quiet, or walking on gentle amble or an adventurous hike, or summiting world famous peaks like Scafell Pike (people come from all over the world come just to walk), others do so to visit specific attractions or take part in an outdoor activity, while there is a minority that have more destructive intents.

These latter are the rogue rider morons of the recreational off-road motor vehicle groups, who drive their large mud-churning 4×4 cars or ride their carving-up scrambler motorbikes and quad bikes on the unsealed roads in the Little Langdale area, devastating tracks and causing untold physical site damage and destruction of this landscape, in continuing violation of its World Heritage Status. The noise of these vehicles can be heard for miles in the valley, ruining the peace and tranquillity that brought it that status.

This activity impacts negatively on the authenticity of the site by damaging sheep farming, one of the key attributes of the OUV, and by degrading the spirit and feeling of tranquillity and remoteness. The off-road traffic also has a detrimental impact on the integrity of the World Heritage Site as it removes crucial elements necessary to express OUV. The perceptible visual and aural effects of motorised off-road vehicles make it difficult to experience the special qualities of the Lake District. 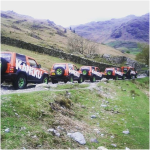 Restore these lanes to their pre-2000 condition as quiet, beautiful fell tracks

Why is this being tolerated by the LDNPA and why have they taken no effective action, we all wonder? Surely, the whole board can’t all be stupid, so whose pocket are they in then?

[The LDNPA has a clear remit:

To enhance their powers of conservation, they were enabled 19 years ago to ban recreational motor vehicles from green lanes by imposing Traffic Regulation Orders (TROs) – and when there is a conflict between access for special groups and conservation, then greater weight must be given to conservation – yet LDNPA still seems desperate to protect the interests of off-roaders and last September it excused the ongoing protection of 4×4 drivers and motorcyclists by falsely implying they had an overriding RIGHT as road users]

It has utterly failed to fulfil this remit and has inexplicably refused to issue any TRO whatsoever since 2004 (and even that was volume non-limiting), and bizarrely it thinks that now enacting surface repairs is some kind of perverse magical solution, when it is the very presence of motor vehicles with their noise and pollution that diminishes the beauty and tranquillity of this place – surely a better track will just attract even more vehicles, won’t it? [Indeed, the Tilberthwaite track has now been completely relaid (without any local consultation) and according to Richard Leafe CEO of the National Park, it will be easier to also drive on – was THAT the real purpose, eh?].

Sixteen years ago the LDNPA’s Corporate Operations Director described the intrusion of 4x4s on green lanes as “nearer to low-flying jets, and it really jars with the experience you’re having…”, and the draft Management Plan said: “recreational motor vehicle driving on green lanes, unsealed roads and byways is inappropriate in the Lake District National Park and should be prohibited”. WHAT THE BLOODY WELL HAPPENED TO CHANGE THAT VIEW?

Last September the Authority published a spuriously claim on their website that the Tilberthwaite Track route is in fact a ROAD – no doubt to justify giving 4x4s free reign?

Moreover, the Tilberthwaite track has only assumed, not proven vehicular rights. Such rural tracks, were built for horse drawn vehicles and walkers, and though then used for agricultural and early quarry activities, they have never been suitable for motor vehicles – especially those that absolutely blight the beauty of the surrounding area, and for example cause vehicle erosion down to bedrock and erosion over a meter deep, motorbike damage to grass verges, broken cross drains, as well as air pollution,etc  [Tilberthwaite Gill is alpine in character] – yet despite that the LDNPA deems just to sit on its hands, eh?

Furthermore, without doubt the LDNP’s aggressive pursuit of technology-based developments to attract more thrill-seeking tourists is mistaken and likely to lead to the erosion of the Lake District’s OUV and special character

Plans include a zip wire at the Honister Slate mine [a kilometre-long aerial runway is to be erected on remote mountain pass between Borrowdale and Buttermere], and for a Gondola cable car at Whinlatter [installing Swiss-style cable cars to turn honeypot tourist traps into transport hubs both at Honister Mine and another stretching across Thirlmere lake], which are viewed as wholly incompatible with the Lake District’s World Heritage Status. The visual and aural impact these projects would have on the landscape would be in direct conflict with the Lake District’s OUV and the stated purposes of the National Park. [the LDNPA also include in their schemes a new leisure pool sited next to the Theatre By The Lake in Keswick (it is said it is also planning to site a new hotel in the town as well as a leisure centre) – so no sign yet of any intention of protecting beautiful landscapes, is there?]

Then of course the Authority thinks that it is a law unto itself, so has failed to comply with guidelines that stipulate involvement of the World Heritage Centre in such plans. Last year when faced with a campaign to act on rampaging destruction and to issue TROs, it refused to even release the raw traffic data it held and had to be forced to do so by the Information Commissioner who upheld the complaint against the National Park. That meant that in January it got caught-out publishing massively reduced figures (up to 40%) in a disingenuous briefing note. Then it unbelievably equates the rights of walkers with those of 4×4 drivers and motorcyclists, and suggests that banning walkers is an option, no less? WHO EXACTLY IS PULLING THEIR STRINGS AT THE LDNPA, so that it is so bloody obstructive to issuing a TRO, eh?

The LDNPA’s briefing note, in trying to defend the indefensible of not issuing a TRO, omits to mention its obligations under crucial DEFRA guidance on TROs, which says: “Partly because of their often challenging terrain, some National Parks have seemed to attract considerable numbers of recreational vehicle users. The Government considers that in many cases a level of recreational vehicular use that may be acceptable in other areas will be inappropriate within National Parks and incompatible with their purposes.

That has been ignored, as has concentration on beauty and amenity, so the real usage figures showed that between 2004 and 2018, there had been an over 5-fold increase in the number of 4x4s on the Tilberthwaite track, and that is despite the fact that the square mile between Tilberthwaite Gill and the Brathay is said to be scenically one of the loveliest in Lakeland, yet the off-roaders have been given a free run of it for two decades and are still – why for goodness sake?

Some ninety-five percent of the Lake District National Park is not owned of course by the Authority, as it has only acquired small elements over the past seventy years or so, but it doesn’t need ownership to fulfil its duty to ensure people can access the land and make sure it cares-for the environment.

[The Lake District National Park Authority’s power is enshrined in law and that requires it to safeguard the National Park now and for future generations, but it appears that it is allowing its partners of other private landowners, stakeholders, vested interests, and commercial operations to dictate that it DOESN’T do so].