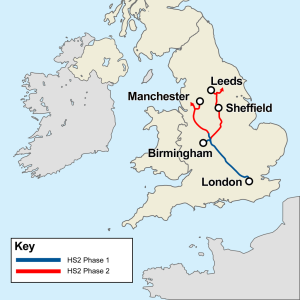 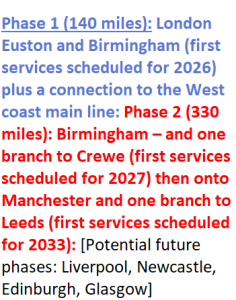 A post here over five years ago outlined exactly why the rubbish coalition government of David Cameron needed to scrap immediately the stupid idea of building the vanity project of a high speed West side rail line with 330 miles of track [High Speed Rail (HS2) – Another Sick Joke by a Sick ‘Out Of Touch’ Government August 24, 2013 by dadman007]

Well, the good news on the wires is that beleaguered Theresa May’s incompetent government is belatedly “thinking of” euthanizing this mad money-guzzling, planned but irrelevant, inappropriate, new railway.

Oh yes, over the years there have been a torrent of media criticisms and exposés from many sources of this ‘out-of-control’ project and the latest of these has apparently just been transmitted on UK television [“HS2: The Great Train Robbery” Dispatches, Chanel 4, Monday Feb 11, 8pm]. No doubt this is well worth watching in catchup by those of us who unfortunately missed it, if just to get a glimpse of just how bad things have turned out so far, eh?

HS2 is the bastard offspring of big business and the lobbying power of engineering conglomerates linked with property developers.

However, the chickens are coming home to roost now, on what was warned-of and posted here that a full half decade ago, aren’t they? Yep, while the very original conception was of a rail system with electric trains travelling at 250mph, but the truth is that there are actually no plans to operate at this speed and the track, control systems and trains being purchased will not be physically capable of it.

So in fact top speed will be 225mph max (even that probably is very optimistic, as say in comparison China’s high speed network is 5mph less), but that will actually be reduced to not exceed 200mph in normal operation (the accepted top-speed world ‘norm’, and that achieved in France – although the top speed in Germany, Italy and Spain is just 185mph per hour),and that in parts HS2 speeds will often shrink to 170 mph, and on some existing track-sections used now will only manage 125 mph [as this is achievable by our ‘normal’ trains]. That was not what we were led to believe and certainly not the fastest bullet train [that is China’s 2004 Shanghai Maglev 267 mph magnetic levitation train on its 19-mile track], eh?

The original case for HS2 was basically about speed and reduced travel time, but not only has that fallen short, but it has become much less relevant to commuters from the Midlands and the North using in-train WIFI to take the strain

The biggest bugbear of HS2 has always been the massive cost of what has now amorphized into Europe’s biggest infrastructure project – although the conceptual budget cost was actually just around £16 billion in 2009 [an enormous amount of money], but for some reason many sources these days just record the 2011 estimated cost which was double that at £33billion. Nevertheless, the duplicitous ‘official’ estimate is now at an eye-watering £56billion, so an astounding 70% increase. Even running this proposed ‘energy inefficient’ new rail service has now officially escalated 40% to an annual £6bn

In that previous post here, it noted that ‘those in the know’ reported that it would really cost some £80billion and not the £33billion estimated– however, even all that has escalated and close sources and independent industry experts are now realistically estimating £100+billion to deliver the project [HS2 is destined to be the most expensive railway ever built ANYWHERE – Britain will have achieved an unwelcome world record, making us a laughing stock in the world, wouldn’t you say?]

With at least 7000 are working on it (including massively paid executives as well are mere agency staff, as well as unaffordable consultants,  £5.5. billion [10% of the total budget, no less] spent as of a year ago so probably nearer £10billion by now, demolition work is underway in London and Birmingham, but construction has hardly started, but spending will now crank up to £4.2 billion (or much more?) every year for a decade, but not a piece of track laid, nor a bloody  train in sight or built nor designed or specified in any detail or a contract for it awarded yet, eh?

[We all well know though that historically British juggernaut government projects invariable get out of control and run monumentally over budget, so it isn’t outside the bounds of possibility that in the end HS2 will cost £160 billion as predicted here all those years ago, is it? No, and for example the original Trident cost went up by 50%, Wembley Stadium 80%, Millennium Dome 80%, Jubilee Line extension 85%, Edinburgh Trams 165%, Channel Tunnel 145%, London Olympics 250%, and the Scottish Parliament building 1000%].

To put those staggering HS2 costs in perspective, the money committed to running and improving the rest of the whole of the creaking UK blinking railway network is just only 6billion a year.

Moreover, this disastrous HS2 project of building a single new railway route will suck the very life out of all other much need rail investment and comes at the very time that the performance of the exiting network is nothing short of calamitous – meaning that customer satisfaction is at its lowest level for a decade, while passenger costs are astronomical [over the past decade rail fares have risen twice as fast as salaries], with the latest fares hike being the greatest in five years, and with fares 5 times higher than in Europe, yet travelers are crammed in carriages to such an extent that it would be illegal to transport livestock in such conditions. [UK’s most consistently overcrowded trains were those into Manchester, and the worst performing train companies served the North and for one operator only half its trains arrived on time – ‘up north’ so of little concern to the London’s powers, you see?].

It is said by experts that bad planning with completely inept decisions have wasted money to the extent that our HS2 project is around six times more expensive per mile than France’s LGV high-speed line of 2001. To boot, the National Audit Office said there was only a 60 per cent chance that the first phase of the HS2 would be completed on time.

Should we really be running high speed trains direct into major city centers with all the high cost and disruption that causes [as in London and Birmingham] or should they have a more out-of-town terminus, like airports do?

HS2 socks the UK with a double whammy as it comes together with the equally disastrous ‘Trident Replacement’ programme, that is setting out to build new submarines to carry life-extended Trident nuclear missiles.

They said at the outset this was just going to cost about £20bn and that included £15bn for submarines. That’s the tip of the iceberg though, because the reality check has to be the ‘total cost’ of the project over a potential forty-years lifespan, so that adds running and servicing costs, upgrading missiles and renewing warheads, adding infrastructure, all in addition to submarine construction – so ‘others’ had estimated the total actually to be some £100bn. Well, the current build cost for the subs rose by £1bn in one year alone and seems to have more than doubled at over £40bn – so you can expect the reality check to double also, making it over £200bn, can’t you?

The current impact of this madcap project to continue to provide a nuclear weapon worldwide deliverable capability, means basically that the Country can no longer afford the conventional military forces it requires. The ultimate consequence of that, is that we will have the ability to strike back in the event of a nuclear attack, and so help bring about the destruction of planet Earth, but if we or our allies are attacked with conventual military power, we cannot respond effectively, nor actually defend ourselves or anybody else – well done Parliament and military planners, eh?

The National Audit Office considers that the MOD department’s equipment plans for the period until 2027 is basically not affordable, while the Public Accounts Committee considers that there isn’t enough money to buy all the equipment the military says it needs, and that Defence is facing a possible affordability gap of nearly £21bn. [Britain no longer has the necessary forces to reclaim the Falklands if Argentina invades, as it was actually able to do nearly 37 years ago – is that what any of us would bloody well expect?]

To really appreciate the magnitude and impact of those overwhelming costs of the new Trident programme [perhaps £200bn], we need to compare that with the latest annual Defence budget of £48.3bn in total (the highest this century)

That cost has to cover everything from staffing & running the Army, Navy and Airforce to buying and maintaining their Tanks & Guns/Weapons & Equipment, Ships & Submarines & Armaments, Fighters, Bombers, Helicopters, Aircraft, Missiles, and all other things including Intelligence, and Surveillance & Reconnaissance, etc. It desperately needs the billions being poured into Trident so we can defend ourselves against modern threats like cyber attacks, wouldn’t you say?

Returning to the matter of HS2, it has to be pointed out that this project is anything but to do with the claimed intent of improving rail facilities in the North of England, as that is all poppycock, isn’t it? The northern cities of Manchester and Leeds are already connected to London, so where does a marginally quicker service come into it all, do you think?

Anybody can see that simply from the fact that the line is to be built in a “Y” configuration, with London underpinning it at the bottom of the “Y”, serving Birmingham at the centre, then Leeds at the top right and Manchester at the top left .It starts with a link from London to Birmingham – a route already with more than adequate train facilities, as it is currently running on average at under half of its existing passenger capacity – why should we spend a king’s ransom increasing it, blighting lives and destroying the environment, incurring massive disruption, and with precious little to show in return?

Rail transport political responsible Chris Grayling has admitted that the Government may well in fact ditch the Northern half of HS2, [the phase 2 route has yet to get parliamentary assent], and that is no great surprise really in light of the mounting costs – it demonstrates though that servicing the North was never ever the focus, doesn’t it?

This rail link is both a naively vain attempt to emulate other countries with state-of-the-art high-speed rail links, married with an unsatisfiable desire to reinforce London as the central focus of the of the UK’s economic future. To put that in context, we need to remember also, that no major rail route has been built north of London for over a century, eh? What does that tell you – the chronic north-south divide going back to Viking times still persists, so stuff anything north of Watford Gap, or what?

What is really needed is urgent improvements to local rail routes into major cities, which are used by millions of suffering commuters each day – that is a worthwhile use of taxpayers’ money, surely? Even more importantly perhaps, in conjunction with that, is the creation of a new growth center in the North with a new conventional rail network with east-west lines linking northern cities directly, and so allow expansion capability outside and beyond the confines of London and the south east – these cities could then compete together as one large single economy, rather than competing against one another.

Oh yes, that was previously formulated as ‘Northern Powerhouse Rail’ {nicknamed HS3], but it has simply been wilting away as it has never been adequately funded – hubs were to include Liverpool, Manchester, Manchester Airport, Leeds, Bradford, Doncaster, Huddersfield, Sheffield, Newcastle, and Hull

[Both trophy projects of HS2 and new Trident, need to be squashed NOW before any more billions are flushed down the toilet: regarding the fools who have supported these cash guzzlers “Lord, what fools these mortals be!” as Shakespeare eloquently put it]