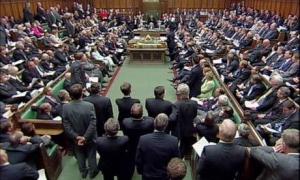 A chaotic, mayhem, bedlam and more, of pandemonium has been going–on in Parliament about the suitability of the current Speaker of its House of Commons no less, one John Bercow.

Now you see, there has been the credible exposure of Bercow himself as an ‘accused’ long-term serial bully in an oppressive environment where a sizeable but minor proportion of MPs consistently behave badly, expect utter deferential, and appear to be minded that they are gods ‘above the law’ [as we already know from the 2009 scandal over their expenses], and that includes deeds in their dealings with parliamentary staff, when they think they can behave with impunity as overlords by ill-treating its employed individuals – particularly those are “the clerks” [expected to be “thick-skinned” officials having a “stiff upper lip” where there is an inequality in their roles, so easy prey for MPs], who play a vital behind the scenes role, but can get shouting at by out-of-control disgruntled MPs without being protected at all [would that be acceptable in any normal place of work, do you think?].

MPs unbelievably simply turn a blind eye to the dishonourable behaviour by others, so the existing system where MPs can be judge and jury about their own conduct means no punishment is dished-out, and that injustice just gets perpetuated.

Reportedly, there has been a culture of bullying and harassment in Parliament for decades and is one that persists until this day, so it seems therefore highly ‘unlikely’ that Speaker Bercow, as himself a suspect and the person basically running the place as well as setting standards, will take effective steps to finally put a stop to it, doesn’t it? Well, that is certainly what many MPs, staff working in the Westminster bubble, and those in the know outside think anyway, isn’t it?

One clerk, highly regarded by senior officials, was promotion to run a committee but was bullied by the chairman to such an extent that colleagues chaperoned her to events so she was never left alone with him and in the end she had to step-away for her own health.

Now, it has to be said that the previous Commons Speaker, Michael Martin, was also a short-tempered git who let-off steam and used his position to bully and intimidate others, so the issue with the current one isn’t ‘just’ a new problem is it? No, and it appears that the bullying issue at our parliament includes not only senior ministers but goes up the chain to those people at the very top of management. That issue itself has been also accompanied by a level of (mainly unreported) sexual harassment, with the younger women in particular at risk, to boot?

Another woman reported “My career at the House of Commons didn’t end when I was sexually harassed. My career ended when I complained”. She left when all she had wanted was to do her job without being humiliated.

A writer accused a first secretary of state of inappropriate behaviour in hinting he could advance her career in exchange for an affair – he denied it but resigned not necessarily for that and more likely because he was caught-out lying about pornography being found on his parliamentary computer, eh?

Other Commons workers aren’t safe either – a journalist claimed a former defence secretary lunged at her and attempted to kiss her on the lips.

Now, just why the staff put-up with bullying, mistreatment, and sexual assault is easy to guess, isn’t it? Yep, parliamentary staff members are ‘not only’ easily replaced but they have the cards stacked against them if they deign to pursue complaints against any MP, don’t they?

Oh yes, we all may think that bad practices by bosses in the workplace have long since been banished because offenders get severe warnings or instant dismissal, but apparently we would be wrong when it comes to the House of Commons, where the overwhelming evidence is that they are still tolerated.

A victim clerk there who protests just gets further bullying and if formally reporting any abuse, is sent on a course on dealing with “difficult” people, or simply gets punished [moved], or forced to leave (tarred with the bush as being sensitive or a troublemaker), while the abuser remains at large with impunity [or at worst told to write a private (not public) letter of apology to the victim] – how the hell can that be an acceptable outcome, eh? The serial abusers are men of course and predictably almost all but a few of the victims are women.

A recent matter implicates the House of Lords as well in the manner sexual harassment is dealt with in parliament. Peer Lord Lester was accused of groping a woman and offering her a peerage in return for sleeping with him [he said the claims were untrue – he would say that, wouldn’t he?] but he was indeed found to have failed to act on his personal honour by sexually harassing the complainant and offering her corrupt inducements to sleep with him – he should have faced immediate suspension from the House of Lords, but instead his fellow peers voted for the case simply to be looked at again [didn’t want to damage his reputation and sod the poor woman’s reputation, eh?.

Following an expose by BBC’s Newsnight programme last March, former High Court Judge and QC, Dame Laura Cox, has on behalf of the House of Commons commission has conducted an independent inquiry into this whole situation of alleged bullying, harassment and sexual harassment in parliament and has delivered explosive conclusions that fully exposed the truth of the allegations that have been rife of that place’s macho and toxic culture with unchecked bullying enacted on gendered grounds

[she concluded in part “….there is an expectation of loyalty to the institution they serve. But that sense of loyalty has been tested to breaking point by a culture, cascading from the top down, of deference, subservience, acquiescence and silence, in which bullying, harassment and sexual harassment have been able to thrive and have long been tolerated and concealed.”]

She has determined that basically the existing procedures for protecting staff are a crock of shxx and should be flushed down the toilet forthwith and that from the top down dramatic change to the practice and culture within the Commons should be forced on the House.

Very significantly she has recommended that so-called ‘historic’ complaints of bullying, harassment and sexual harassment which previously had been blocked should also be open to investigation – now allowing the likes of Bercow, who has previously escaped censure, to be properly questioned. Also she required the appointment of independent authorities with due powers to impose sanctions on MPs in cases of misconduct, as currently MPs alone are the sole arbiters and unaccountable powerful judge and jury over their own conduct, indeed?

Some dozens of current and ex-parliamentary staff who have reported bullying and harassment at Westminster have waived their right to anonymity and together with a number of MPs and journalists have sign an unprecedented open letter calling for urgent change through the immediate implementation of Dame Cox’s proposals.

Turning to Bercow then, for example his former private secretary [very senior role] was forced to leave it after less than a year having suffered post-traumatic stress disorder, reportedly because of his bullying behaviour which included shouting at her a lot [he repeatedly denies all obviously]. Oh yes, she was punished of course and not him, which that meant her being moved by the House authorities to a specially modified role that avoided Bercow completely. Another Bercow’s former private secretary reported that he was sworn at and mimicked by this Speaker. Furthermore, Bercow is reputed to have shown temper tantrums to clerks and they definitely don’t want to work for him nor aspire to be his private secretary.

Bercow is all powerful in the Commons chair because he and he alone decides which party and who is allowed a voice, so MPs of all persuasions and at all levels are wary of crossing him, aren’t they?

A formal complaint against Bercow, accusing him of intimidation and bullying of [the Leader of the House (so a senior minister)] when he branded her actions “f****** outrageous”, and calling her a stupid woman and a liar [allegations not denied and he admitted using the word “stupid”].

The senior official, who served as Black Rod in Parliament until last year, says Bercow created a climate of intimidation and fear among MPs and officials and could be intimidating, unreasonable, and disproportionate. On one occasion the “red mist” descended on the Speaker and he banged the table and yelled and was highly personally insulting calling Black Rod an anti-Semite.

Instead of standing aside, Bercow even has had the gall to retain the chair when the Chamber has had debates about bullying problems – well until last month at least when he recused himself the Independent Complaints and Grievance Process was debated [not many MPs turned up – not the place to be seen when Mr Speaker is spying-in, eh?].

[Commons Speaker, John Bercow, should not ‘consider’ standing down as some have suggested, he bloody-well SHOULD stand down as many have demanded, or better still be ‘SACKED’ – that would certainly send a message, wouldn’t it?].