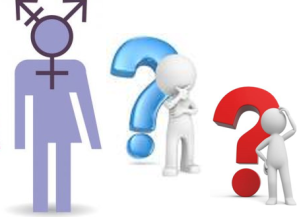 A major debate is raging in England just now over ‘proposed reforms’ to the gender recognition act (GRA) of 2004, while most of us have no idea what the hell that is all about nor what is going on now, do we? Well, what we ought to know though is that the blood-sucking lawyers are loving it all, as they are expecting to make a killing whenever there is legal controversy, don’t they?

Nothing against lawyers in general of course, but they just feel the need to hitch themselves to any passing wagon to make as many fast bucks as possible while the gravy train lasts, eh?

Just to set the scene, it has to be said that it is an accepted medical fact that male and female gender is set at the time of conception, so 9 months before a baby’s birth. At birth the gender is determined normally without ambiguity purely by the genitalia and that sex is recorded on the birth certificate as Male or Female.

However, in adulthood certain people find that they are not as the norm attracted to those of the opposite sex but instead to others of the same sex as themselves, so they self-determine as male homosexual or female lesbian. Well, for many centuries that was outlawed in this Country and sexual participation between same-sex couples was deemed to be unlawful and punishable.

It was only fifty years ago that homosexuality was decriminalised here and even then, for decades thereafter homophobia was rife in the UK and there are still pockets of that around particular amongst immigrant communities, aren’t there?

The unconscious bias in British psyche that has that has adversely coloured attitudes to homosexually and lesbianism has most definitely abated, though it does appear nevertheless to some of us that they seem to get undue prominence these days in the world of drama entertainment for some reason?

While most of the population might well be aware of the lesbian and gay scenario and these days are likely not only to have come in contact with many individuals, but will have had family experience, or know them well, or have friends of that sexuality, it is less likely that they have personally come across transgender people, as there are just say ten thousand or so of them in England?

Now those people are ones who have developed a ‘gender identity’ that differs from their assigned sex, which in practice means that they feel to be in the wrong type of sexual body to express their desired gender. Sometimes they deeply desire medical assistance to transition from their physical sex to the other, in which case they are known as transsexual.

The situation is further complicated by other individuals who don’t feel themselves to be of either male or female sex so are of a ‘third’ gender often termed ‘non-binary’.

Now apart from the fact that hordes of us don’t give a hoot about what any of these people do in their private life, it does become a problem in society when people want to change the ‘recorded’ gender on their birth certificate and ‘legally’ operate as a member of the opposite sex. You see gender affects a great number of things in the way an individual operates within the community, doesn’t it?

Yep, it can affect the safeguarding of children, women and vulnerable adults, the types of jobs people are employed-in like roles normally reserved to women, access to women-only spaces like women’s centres, Girl Guides, ladies’ swimming facilities, rights to women-only services, the age a state pension becomes payable, access to female-only services protected by exemptions to the equality act, participation in competitive sport, parental status, religious constraints needs, and much more.

Furthermore we cannot allow a situation developing whereby for example women-only shortlists, schemes that boost women’s representation, or woman specific awards, that have come about to redress historic male dominance in certain arenas, can now be hijacked by the transgender in what might be seen as a less competitive environment

‘Biological sex’ must remain a protected distinguishing attribute in law, and continue to be treated as a separate category from ‘gender identity’, which cannot be allowed to assume the equivalent status as the lobby is seeking, can it?

So, why has all this become topical all of a sudden?

Well, for a start the GRA was kicked-off over a decade ago when an male by birth transsexual activist argued that the government failed in law to fully recognise her as a woman in breach of Human Rights, and the European Court upheld the complaint, so Parliament changed the law but that regarding cases of fully achieved and post-operative transsexuals.

However, there has been a long-running campaign to change that new law because it is claimed that trans people are forced to endure a lengthy, highly medicalised, bureaucratic and ‘demeaning’ process to acquire gender recognition [to obtain a gender recognition certificate that changed their birth certificate’s biological sex).

Reforms are being demanded that include that non-binary people are included in future law, that even that each and everyone should be allowed to legally choose their own gender i.e. allowing anyone to self-identify their sex themselves without any diagnostic confirmation of having gender identity issues, meaning for example that even ‘self-identify’ trans people should be legally entitled to use single-sex spaces [where currently they rightly get turned away?]. As the idiom goes, what a crock of shxx these ideas are, surely?

While some level of law reform to protect affected individuals against victimisation or exclusion, is certainly appropriate, such proposals for expansion of the definition of transgender in this way to include those who are NOT transsexual, or whether or not individuals intend to make permanent physical changes, is a step too far, surely?

Now while most of us would accept that being trans is not an illness and certainly wouldn’t want to unnecessarily discriminate against those in that category, we certainly don’t expect their needs or desires to rule the roost over the rest of us heterosexuals or create risks or conflict, do we?

The existing equality legislation ensures all trans people are protected regarding employment and also against discrimination, except where appropriate specific sex-based exceptions exist so can be invoked.

What we cannot allow are changes that say allow male sexual predators, or paedophiles and the like, to self-identify themselves as women to gain easier access to their prey and we know well that such people as persistent sex offenders are skilled manipulators prepared to go to any length in their constant search for any kind of devious way to gain trust and obtain contact opportunities with potential targets.

Regardless of gender ‘identity’, we must maintain sex-segregation to defend women, girls and their female-only services, whenever that is appropriate and reasonable, particularly wherever women need protection from male-bodied persons, like say at abused women refuges, rape crisis centres, and of course prisons.

Despite the fact that provision already exists in prisons to exclude certain women whether trans or not, based on their record, from the female estate if they are deemed a danger to other inmates, the authorities have already been mesmerised by the aggressive transgender lobby and pre-any legislation changes, have allowed a multi-sex offender and multi-rapist, a male self-identified transgender women, into a woman’s prison to commit further sexual attacks on females [convicted two weeks ago and jailed for life] – there is a lesson there to be learnt, surely? Yes, and it is that any male with a retained penis cannot be allowed in any future law amendment simply to transgender to obtain a female certificate that gains them access to female only spaces or jobs or situations. [note that in fact almost half of trans women prisoners are sex offenders and a quarter have convictions for sexual offences relating to children – so none of them should EVER be banged-up in a woman’s prison]

There are rightly genuine concerns over those convicted of male violence against women, subsequently self-identifying as women, and those sexual predators should most certainly be excluded from acquiring a new gender without being post-operative transsexuals .

There is a massive problem lurking under the surface however and that is the one concerning minors with gender identity issues, as these certainly are not included in current legislation and are unlikely to be included in any changes.

It is particularly worrying to those of us who have come across it that children as young as six years-of-age are somehow being encouraged to desire to be of the opposite sex and while it is not clear how this is happening [as there is an explosive over 4,000% increase in girls wanting to be boys and over 1,200% increase in boys wanting to transgender, there has to be a BIG question WHY], nevertheless it is certainly being indulged rather than being tackled. We need to be clear that this is a totally different phenomena from what has always happened with girls being tomboys and boys dressing-up in their sister’s dresses when they are experimenting with their gender, which is perfectly normal and healthy, isn’t it?

[Much of the concern about proposed change in the gender law has to be about those born male, and that is because it has to be taken into account that the overwhelming majority of sex offenders are indeed male so risk assessment becomes a crucial factor in the decision]