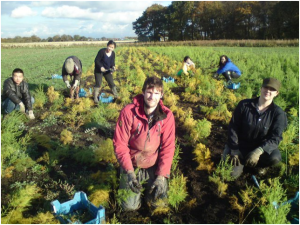 Somehow or other, a silly debate is raging here as to whether or not it is a good thing for teenagers to actually work in holiday time. It was kicked-off a couple of days or so ago when Esther McVey (Secretary of State for Work and Pensions) wrote an article encouraging youngsters to go out and get summer jobs. She explained that it helps developing the skills needed for successful careers. Sound advice, surely?

Well, it did not go down well to say the least, but you would think that she was encouraging the next generation of workers to commit hari-kari, from the resulting online hornets’ nest she has innocently kicked-over. Not only has it provoked a vitriolic outpouring of personal abuse on social media about McVey as a person (for example saying “opening her useless trap again”), from some who appear to be educationally challenged, but other supposedly competent adults involved in education are on the airways pontificating about how teenagers NEED their summer holidays when they can do absolutely NOTHING.

These people have got a screw loose, the first group don’t seem to know how things are in the job market and think that work experience is a waste of time and doesn’t count in getting work [yet that is the very thing that good secondary schools promote, and when a week’s work experience used to be compulsory, and was considered part of children’s’ education until 6 years ago (scrapped by Government for unfathomable  reasons) – indeed 8 out of 10 teenagers under 16 want THAT now reinstated, as do business leaders]. Then with comments like “There’s not a glut of paid jobs!” demonstrating a dearth of understanding, or being reading & comprehension challenged, as just a couple of weeks before, it was widely publicised that the number of people with jobs in the UK just hit an all-time high, while the number of job vacancies is also at new record numbers, eh? Then of course there were the lazy teenage fun seekers with their comments of “typical Tory, wanting kids to work in their holidays and thus reduce the enjoyment of being off school – childhood should be for having fun”, or ‘why would kids sacrifice their summers just to get a job?’ [not much commitment to future employability there then, eh?

[Employers reported 824,000 job vacancies for the period between April and June, the highest number since comparable records began in 2001].

As for those adults from the educating group, who should know better, but still are promoting the idea that the energy ‘drained by studying’ teenagers need to have 6 weeks complete rest couch-laying, with their families providing on call side-table service, with the only physical activity being dialling on their smart-phones, in order for them to recharge their batteries enough to resume, their battle of death with the Education system in September, beggars belief, doesn’t it? The ONLY possible explanation for this attitude, would be that they expect these youngsters to simply joint the increasing band of workshy shits, who leave their studies to head-off for the Welfare State for their lifelong support, while doubtlessly along the way creating children with numerous partners to sadly give themselves a role in twenty-first century life – why would THEY need more bloody work experience when they don’t ever intend to get a job let alone a career, eh?

[At least 300,000 young people live independently on benefits – that’s 1 in 25 of all 16 to 24 year olds – so, young people with limited experience of money budgeting, plus an un unstable foundation of housing and income, who they are not taking advantage of training and employment opportunities, hence they are heading into a lifetime of pressure, misery, and inability to ‘get by’. On top of that, in the same age group, staggeringly, there is a small army of almost 480,000 young people [60 per cent of the official total of young jobless, indeed?] outside of the state help system [so basically are ‘hidden’ and below the radar], destitution status unknown, whose lives are disturbingly likely to be one of ongoing unemployment and poverty]

Both these groups are belittling the beneficial aspects of working for your keep in conjunction with study, and belie and belittle the very fact that many many teenagers in England DO still in fact get weekend and summer jobs, so not only successfully dovetail this into their studies without detriment to them, but find it personally enjoyable to boot – so, as well as boosting the work ethic, they are enabled to financially help support their families, even if only by providing their own spending money, which is indeed self-helpful in learning the true meaning of independence.

Too many teenagers these days leave school, but then are allowed by parents to slope-off for a year’s holiday – only they call it a gap year to muddle the unknowing. What kind of message will that send to prospective employers about their work ethic and commitment, when they finally decide that the world doesn’t owe them a living, do you think?

Those of us of the old school, who indeed have successfully survived further education and gone onto challenging careers, know just how much of an important part school holiday work has played in that. We know full well the rigor [interspersed with joy in achievements] involved in the education process (which we would not have missed for the world, of course), but appreciate that the lives we had outside of that and in addition to it, was a immense bolt-on contribution to our qualifications and abilities. Working in low level & low paid jobs is in fact quite a wonderful experience, and though it may be quite hard at times and physically draining, it is not difficult in the least, because you know it is only temporary and for a few weeks at a time.

Holiday working on a farm in your early teens and being helped along by pensionable-age farmhands when you struggle is a valuable life leveller. Running up hundreds of pathways and stairs delivering Christmas mail and being verbally thanked by householders, often with a treat, teaches you much about communities. Working in a shop and learning about enjoying giving good service is a lifelong free gift. Slogging it out on 12-hour shifts of manual labouring on nights in a big works, makes you fully appreciate forever the cushy life your final career provides you with.

In all such jobs you are working cheek by jowl with hard-grafting, committed working class men and women, of all ages, who fully earn every bleeding penny that they take home to their often poor families, but these are workers who are the salt of the earth, and who would give you, even just a temporary workmate, their last crust if you were in the shit – what kind of wonderful experience and message does that give you to carry with you through life, do you think?

You’ll find that it is the children and grandchildren of the ones who have themselves done holiday jobs, who will still be going down that path to achieve their own life goals. They are the waitresses, fruit pickers, gardeners, shop assistants, office temps, hotel kitchen staff, glass collectors and washers up, entrance fee collectors, and much more, working in holiday and weekend jobs that will see them do well in the real world when their education is complete.

In today’s times, education has become the overbearing and only focus for young people lives, and this has been at the expense of gaining invaluable experience of people, situations, problems, working at the bottom, and acquiring the skills required later in the workplace.

We see even the crass situation when many of our young men & women leave higher education or training, woefully ill-equipped for employment, showing the wrong attitude to work, having inadequate skills, and an unrealistic belief that a bit of paper will secure them a life of luxury and pleasure – they don’t even realise that the qualifications the hold now will be of no blinking relevance in say twenty years time, as jobs are evolving and changing so rapidly and unexpectedly in modern times, aren’t they? [The days are long gone when somebody started a job in a company and the same job was actually still there when they retired, eh?].

Increasing numbers of graduates [perhaps 20%?] are shirking taking the important step into employment, and are instead hanging-in there at Uni to enjoy the relaxed life of postgraduate education – you can bet your bottom dollar that they didn’t see the merits of doing summer jobs either, eh?

[The percentage of young people working while studying has more than halved this century – falling from 42 per cent to 18 per cent in seventeen years. Rather than the further discouragement from the gallery, our teenagers need to heed the advice of Esther McVey and act NOW –it’s NOT too late to grab a summer job, eh?]