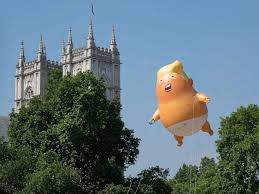 A previous post here “Donald Trump ducks his London visit – ASHAMED?” January 13, 2018 by dadman007 outlined the general adverse attitude of people in Britain to US President Donald Trump, with some reasons why.

However, it was made plain nevertheless that while many of us don’t have any respect for the man, or what he is, or what he stands for, we should ALWAYS respect the office he holds and should formally treat him civilly with good manners and hospitality in England or elsewhere – that didn’t happen in London yesterday, did it? No, and that has been followed-on by elements of the gutter press filling their rags with abusive raging against the elected American President.

The ONLY criticism that Trump should have faced here was a muted one about his personal ‘scaredy-cat’ lack of spunk by sneaking into the UK on a so-called ‘business trip’, rather than the much more appropriate ‘State Visit’ he was offered and expected to undertake, that was followed by a derisory involvement within London (OUR Capital indeed), apparently avoiding potential demonstrations there. He would have done his image an immense favour if he had simply faced-down it all [but draft-dodgers don’t have the balls, do they?].

The UK’s image may be tarnished by the brash (but insignificant) public street demonstrations against the man, but it is really damaged by individuals overstepped the mark, like the Labour politician and elected Mayor of London Sadiq Khan, a Muslim who for months has been having a Twitter included, unnecessary unseemly ‘war of words’ spat with Trump (which Khan is bound to lose?).

You see Khan took umbrage and reacted scathingly to Trump’s (terrorist or was it RELIGIOUS & RACIST?) restrictions against visitors from certain Muslim countries entering the USA – now, Khan might not like the policy, but what the hell has that got to do with him anyway (or any of us Brits for that matter), because after all it is America, not Britain, and their Highest Court has deemed it to be perfectly legal there, hasn’t it? Khan also has made clear public statements that Donald Trump is ‘not welcome in London’ – he seems to think that it’s HIS city, when he is in fact only a (temporary?) incumbent as Mayor, eh? ANY American President, of whatever persuasion, or however crass, whether we like them or not, IS bloody-well welcome in London and everywhere else here, as the US are Britain’s closest (only?) ally, and we together with much of the World rely on them (even when their Presidents have their strange moments).

Trump understandably responded to Khan by pointing out (rightly?) that instead of shooting-off his mouth bigtime on matters in the US, he should do a proper job of running London, which was what he was elected to do, surely? Khan is on thin ice on keeping the Capital’s population safe, due to his “mealy-mouthed politics” and in particularly his abject failure, and slow reaction, to tackle London’s crime – with shocking violent crime figures that includes the murder rate climbing higher than New York’s, and loss of control over abounding moped gangs, those making 10s of thousands of surprise and violent attacks willy-nilly around the City [up 30 fold in 5 years, with hotspots West end, Camden, Brompton & Hans Town, St James’s, Southbank: reportedly, last year one gang carried out 30 robberies in the capital within an hour period; so, motorcycles and the like are being used in crimes involving phone snatches, gem store raids and acid attacks]. These things are happening on HIS watch, and he seems clueless on how to put a stop to it, or how to establish goals to achieve it.

[Of course, Trump has taken the opportunity to also (unjustly?) point the finger at Khan over the terrible terrorist 2017’s attacks in London (leveling the accusation that he did “a terrible job” afterwards)].

In an unseemly petty spiteful action, demeaning of his office, Mayor Khan allowed schoolboy behaviour Trump protestors, to float a large 6 feet ‘angry baby Trump in a nappy ” blimp as a figure of fun insult, over Parliament Square, no less, during his working visit to the UK [as if Donald would give a damn, anyway?]. What the hell are our elected senior civic chief executives coming to these days, eh?

Perhaps Khan could spend his time doing the much-needed things that fully demonstrate the positive qualities of followers of Islam, which is increasingly being destroyed by Isis, and the others, who are  trying to exterminate other religions and abolish our way of life, don’t you think?

What we ALL here in the UK have to appreciate, is that Donald Trump simply represents the prevailing view of (the lowest common  denominator) American electorate, because he was elected by them.

The other factor is that Trump campaigned on precisely the policies he is actually implementing – how exactly can us Brits complain about that [probably because our PM reneges on hers, eh?].

[If anyone has a grouse about the cretinous politics being implemented over the pond, it should be against the American people and their vile attitudes, and NOT simply focus on President Donald Trump, surely?]