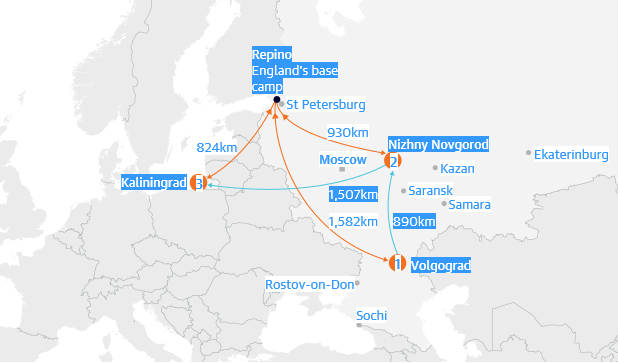 The England football team flew into their un-pretty St Petersburg [formally Stalingrad] base (in the Repino district some forty miles away from the city),  just 6 days before their first match – the very ‘last’ of the 32 World Cup finals’ teams to hit Russia [why for goodness sake?].

That is in addition indeed to them being the ‘youngest’ and ‘least experienced’ of them all [why is that wise?]. They are one of only three teams [certainly not our opponents] basing themselves in Russia’s second city, and they will have to return travel nearly a thousand miles to their first (and critical?) game against Tunisia in Volgograd, over 500 miles to their second against Panama in Nizhny Novgorod, and some 580 miles to their third against powerful Belgium in Kaliningrad.

Why is this really the best way to prepare or acclimatise for a World Cup [not least when their first challenge will take place in southern city stadium of sweltering summer heat – a climate totally unlike their St Petersburg northern base]?

In terms of form, England ought to win against Tunisia as the latest rankings this month have put England 1 place up and Tunisia 7 slots down. Now, whether or not we are in fact much superior as now looks on paper, Tunisia will be much better equipped to handle the climate in the game, as they are used to hot and dry Mediterranean summers, while our players have not properly prepared for that, have they?

[As a seeded team, Belgium are most likely to progress from Group G to the Round of Sixteen, so England needs to win against Tunisia (and later Panama of course) to seize second slot to avoid an early flight home, don’t they?]

Top 2 teams in each Group qualify to progress

All winning 8 teams to progress

The winning 4 teams to progress

The winning 2 teams to progress