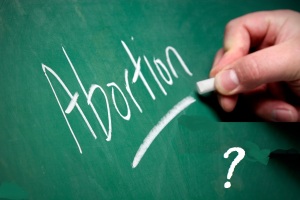 In a referendum last Friday, the Irish Republic voted by a landslide to repeal the ‘Eighth Amendment’ constitutional protection for the life of the unborn, so their parliament can now proceed to ‘liberlise’ abortion – basically that means pregnancy terminations ‘on demand’.

[Abortion is currently permitted under the act only where there is real and substantial risk of loss of the woman’s life (including from a risk of suicide). However, the Constitution also protects the right to travel to obtain an abortion outside the state – and many do).

This landmark result provided a (hollow?) victory for the Irish pro-abortion campaigners, but surely that did not excuse the disgustingly joyful and gleeful celebrations or dancing jigs, worthy of a cup-winning football team, did it? Winning the opportunity to violently end the lives of countless unborn innocents is deserving of a more appropriate sober and lower-key recognition of success, surely?

Pregnancy termination is a serious matter, irrespective of the side of the abortion debate one sits, and it should always be treated in a sensitive manner.

Some would have it that the Republic is now reborn as an open society that embraces modern ideas – that may well be so, but is that to the good, eh?

Now, many will know that Catholicism based southern Ireland had until thirty-odd years ago also banned contraceptives, which consequently were simply smuggled-in across the border from the north, though? No doubt their law change then was seen widespread by the young (?) as bringing social progress to their lovely country, but as always there is a price to pay for such ‘so-called’ evolution, isn’t there?

For a start, as we have experienced here in the UK, (following the pill being available on the NHS in 1961), the ditching of the more ‘moralistic world’, brings about the onset of an era of loose morals that totally undermines all forms of respectability and moral perception (particularly amongst the young and impressionable in society).

Nevertheless, many are still convinced that the contraceptive pill ‘liberated’ women, when in fact and reality it has ‘enslaved’ them, because with ‘getting pregnant’ supposedly ruled-out, women [married or not] had no valid excuse to ‘say no’ to sex from testosterone driven males, and moreover responsibility for contraception transferred from male to female [it suddenly became HER duty solely not to get pregnant, didn’t it?].

All that has basically resulted in a destructive general level of promiscuity [married or not] which has blighted our societies, resulted in a ‘divorce’ rate pandemic [since a high in the 50s rising threefold in the 90s], brought about a plethora of marriage-less (but not necessarily childless nor stable-partnership) assemblage of ‘cohabiting couples’ [the fastest growing group (now at 6 million) despite their lack of legal protection], numerous children born to women ‘unmarried’ and without a male partner to support her and a child, despite contraception one of the highest rates of ‘teenage motherhood’ in Europe, an explosion on the number of ‘children going into care’ [record numbers (now 90 a day) driving social services to tipping point], a ‘health crisis’ with half a million new cases of sexually transmitted deceases [like soaring numbers of drug resistant syphilis & gonorrhoea infections, or cases of Chlamydia (our most common bacterial infection) doubling in six years and possibly now affecting 10% of ALL sexually active women under 25], and ‘abortions’ carried out on women and girls on a scale unimaginable to those who originally in the late 1960s had promoted its ‘liberalisation’ (the MOST liberal anywhere?) to help the few that had good reason and motive for an abortion [and supposedly ‘save’ lives lost by use of backstreet abortionists – when the real truth was mortalities were rare because such ‘illegal’ abortions were actually carried out by ‘skilled professionals’].

Legal termination has now switched from being a limited drastic medical intervention to save a well but distraught troubled woman, to being a longstop method of contraception for the irresponsible, hasn’t it? Some forty percent of abortions are carried out on women who have already had 1 or more abortions – it has even become a ‘human right’, sadly?

The Republic’s parliament will no doubt set-off with a limited abortion liberalisation; say setting a time limit at a maximum of 12 weeks gestation, unlike us here in the UK.

You see, our 1967 act made abortion legal in all of Great Britain (but not Northern Ireland) up to 28 weeks’ gestation – why does it take 7 months after a sexual encounter for a woman to realize that she’s pregnant, or that she just can’t mentally bear to have have the child? . [The 2¼ lb fetus is by then fully perfectly formed as a baby with hearable heart beating, including functioning, but was said not yet ‘fully mature’ brain, lungs and digestive system) – Nevertheless, “IT” was still legitimately killed (in the womb).

However, if even a premature baby is in fact “born” even for a second; deliberately killing it would be dastardly murder, and the subject of prosecution, wouldn’t it? [That applies however ‘young’ the mother, however ‘unwanted’, however “inconvenient” the baby might be, however “life-changing” things would turnout, however ‘disabled or damaged’ the baby, or whether or not of “the wrong sex”, eh?].

Our deemed ‘viable term’ and termination limit was subsequently reduced in 1990 from 28 to 24 weeks’ gestation [it is not known here how many of those of 25,26, 27, & 28 weeks gestation had been killed in the intervening forty years]. In most countries the limit is 12, 15, or 16 weeks maximum for terminations – WHY are we so different?

Moreover, at 24 weeks pregnant a baby DOES actually have a ‘chance’ of survival if born, as lungs and vital organs might be then developed enough [but there are increased risks of disability].

Note, that in fact the youngest ‘surviving’ baby in the world was born a couple of years ago in the US at just 21 weeks and six days gestation – yes, a verified 2 whole weeks before the time limit for legal termination ends here [or resuscitation is denied in America (yes, the mother had misled the doctors to save her daughter)].

Oh yes, without doubt that was nothing short of a miracle of survival with astounding medical skills employed, but what do you make of it, then? It does not imply that babies are viable, nor even should be saved by resuscitation, if born at 24 weeks, but does it make it right that an almost-viable baby can be killed willy-nilly in the womb? You don’t have to be ‘pro-life’ or ‘anti-choice’ to feel uncomfortable about it happening, do you?

British MPs certainly don’t care and even a decade ago (despite opposite predictions) voted (driven by Labour indeed) to retain the “right-to-choose” a ‘late’ abortion up to and including 24 weeks gestation.

[Over 8.7 million unborn babies have been terminated by abortion since 1967, and now every week 4,000 babies die by abortion in Britain – what does that tell you about irresponsibility and the uncaring in our society, eh?].

While, we might wish the people of Eire the best of luck with their decision to relax abortion regulation, that can’t be without a heavy heart in light of the pain and turmoil that will inevitably result to their society and way of life.

Oh yes, the Northern Ireland ‘termination brigade’ will be pressing their government (when back in place instead of current temporary rule from Westminster] to follow the South’s example [indeed they actively helped in their campaign], and they may well succeed as its population is equally in favour of ‘progress’ – killing the unborn.

[Nothing us outsiders can do now, except perhaps for the godly amongst us to pray for the thousands of to be lost souls yet to come?]