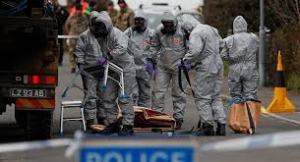 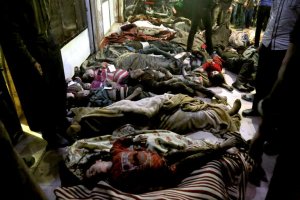 It is a truism that the Labour’s hard-left [i.e. those now in control of the party] are like dinosaurs living in the past – they still think that Russia is an ideological socialist haven to be admired and a country that would help them seize power in the United Kingdom, so it could be turned into a pseudo-communist state.

Dream on idiots. ‘New’ Russia has resurfaced under Putin as a place ‘run by crooks for the benefits of crooks’, who have destroyed their economy, who are set on destroying a once great people, who are determined to take centre stage in the World at any cost, and have re-established dictator Stalin’s reign of terror style, where thousands of citizens can perish, Putin’s rivals are killed, and his mafia state simply eliminates those who get in its way.

It will not have escaped the notice of many that two recent horrendous incidents – one an attempted assassination in England and the other a chemical weapon bombing in Syria (both recorded below) – involved the Russians. Nor will many not appreciate that one powerful weapon that Russia always deploys when its dastardly actions are exposed, is that of spreading false and muddled stories. That is further supplemented by Kremlin propaganda, disinformation, trolling, and as a matter of policy, astoundingly unbelievable, grotesque, preposterous lies .

And so, it has been over the past weeks regarding these two events, hasn’t it? Yes.

No surprise there then, but what has shocked many of us, is how Jeremy Corbyn, with his cronies, and his fellow travellers, have refused to condemn their ‘can-do-no-wrong’ Russia, but instead have given credence to its misinformation machine and have inadvertently or otherwise (?), added grist to the mill.

Corbyn despite being party to the relevant security information has, to the delight of the Russians, questioned both the evidence of Russia’s culpability for the attempted two murders [he wants to see “inconvertible evidence” before Moscow can be blamed], and sided with Assad & Putin over Syria and questioned the right of Britain to take appropriate action on their illegal use of chemical weapons. [The OPCW have recently confirmed Britain’s findings on the identity of the nerve agent used in Salisbury]

[In this civil war, since 2013’s chemical attack [when Labour blocked us taking action], Assad’s forces have used multiple aerial attacks with banned chemical weapons, as verified a number of times by the UN, OPCW, and Human Rights Watch – so every single year since then 2014, 2015, 2016, 2017, and January 2018 [at least 85 carnages].

Not only is Corbyn a diehard supporter of the soviets but he is an undeclared pacifist – he and his team consistently refuse to answer the valid question as to if there were any circumstances where Labour would support military action. Also, they persist in a claim that such issues implicating Russia have to be resolved at the UN Security Council, despite the contradictory fact that Russia always veto’s any investigation or action.

Is Corbyn really a man we want to protect us and our country from the world’s aggressors – just remember that it was the pacifists and the appeasers here who by inaction created the environment that resulted in the devastating WWII that brought death to over 50 million people, won’t you?

[The action taken by Prime Minister ‘Theresa May’ on chemical weapons use in Syria shows she can actually face up to the great responsibility required of her office, while the actions of Leader of the Opposition ‘Jeremy Corbyn’ has conversely shown the exact opposite regarding his]

The assassinations failed because medical help [and a policeman] went to the aid of the critically-ill father and daughter. (the policeman was consequently part-poisoned himself), and all three were saved by prompt intensive hospital treatment by experts [The father remains still in hospital and it is highly likely that all will suffer long-term consequences].

While it was clearly impossible for our nerve-agents experts themselves to single out a laboratory or factory that sourced the toxin used, their analysis was supplemented by our security forces, who with a high degree of confidence advised that it was overwhelmingly likely to have come from Russia (and also claimed that the Russians conducted tests to see whether novichok could be used for assassinations).

Understandably then, the Government concluded that it was ‘highly likely’ that Russia was responsible for the attempted murderous act and therefore there were only two plausible explanations for what happened in Salisbury – either this was a direct act by the Russian State against Britain, or that the Russian government lost control of this potentially catastrophically damaging nerve agent and allowed it to get into the hands of others.

The UK charged Russia of this disgusting incident and implemented a series of punitive measures against Russia, including the expulsion of diplomats, which was indeed supported by twenty-eight other countries who responded similarly – so altogether an unprecedented 153 Russian diplomats were expelled from countries.

[UK resident Sergei Skripal (a convicted but ‘released’ by Russia, British spy) holds dual Russian and British citizenship, while Yulia Skripal is a Russian citizen, and was visiting her father from Moscow]

On the Saturday late afternoon & late evening, just over a week ago in the Syrian city of Douma, the murder by ‘further’ chemical attacks’ reportedly by on-site medics of poisoning some seventy people (men women and children) was carried out using suspected chlorine gas and sarin nerve agents, as is widely believed to be retained by the Syrian army, despite a (failed?) international effort to remove Syria’s entire chemical arsenal in 2014.

While it was clearly impossible for anyone to confirm the origin, or even the killing elements of the attack, not least because the Syrian government and its Russian ally have blocked access to the location [until the area has been sanitised & its peoples intimidated?], but the security forces of Britain, France and the U.S. assessed with a high degree of confidence that the chemical attacks were carried out by the Syrian regime

Understandably then, the Government concluded that it was ‘highly likely’ that the Syrian regime was to blame for the shocking and barbaric chemical attack on its own people and that such action could not go unchallenged.

Russia has said both that the Syrian ‘chemical attack’ didn’t happen at all, there was no evidence, so was a hoax, and on the other hand that they had irrefutable evidence that it was staged by foreign agents [plus evidence that proves Britain was directly involved in organising this as a provocation].

They threatened that any military retaliation against their Syrian ally Assad could risk starting a war as Russia would respond militarily against both the missiles and the platforms from which they’re launched [fat chance?].

Last Saturday at around 4am, the UK, France and the US launched a coordinated series of precision air strikes [105 missiles] against Syrian chemical weapons facilities in a bid to deter the tyrants Assad & Putin’s further use of internationally prohibited weapons and their blatant disregard of the CWC against such weapons – that arms control treaty outlaws the production, stockpiling, and use of chemical weapons. It was a necessary and appropriate action to hold accountable those responsible for any attack with chemical weapons, that had extensive support, including that from Canada, the European Union, Israel, Germany, Turkey, as well as NATO.

[The Jaysh al-Islam rebel coalition controlled ‘Douma’ at the time of the chemical attacks, while other rebel groups controlled the area around the city]

In the other matter of the Skripal poisonings, Russia has had a catalogue of changing, evasive, and absurd smokescreen stories throughout, except being consistent about claiming that Moscow didn’t do it.

On the one hand, they denied the very existence of the novichok nerve agent or that Russia had ever developed it [despite the glaring evidence that in a 1992 Russian treason trial it was openly admitted).

On the other hand, they said that ‘it was a fact that novichok was stored on the territory of the republics of the former Soviet Union’, like Ukrainian; or that a Russian defector chemist who had developed it, had released the formulas, so it could have been produced in any properly equipped chemical laboratory in the world; or that Russia had destroyed all chemical weapons stockpiles, including those developed by the defunct Soviet Union, so held none; or that the UK was exploiting the case and blaming Russia for domestic political advantage [like Telford child sex scandal); or that after the Russian Federation destroyed its chemical weapon stocks, the development of such weapons continued in Great Britain itself, as well as the U.S.A., the Czech Republic, and Sweden, while laboratories for the production of the type of chemical agents identified remained in a number of states, including the Baltic countries; or that it would have been next to impossible to transport novichok into the UK because it has a characteristic overpowering smell; or that if a military-grade nerve agent had been used in the Skripal incident, they would have died on the spot and that anyway Russia wouldn’t have carried it out ahead of their Presidential election and their World Cup.

‘Amongst other things’ Russia has accused the UK & U.S. secret services of carrying-out the disgusting deed themselves, to maintain Western unity against Moscow. [and Russian Foreign Minister is quoted “…it may well be beneficial for the British special services who are known for their ability to act with a license to kill..”]. They have claimed that the UK has illegally denied Consular access to the stricken pair, and even that we have abducted them, and are holding them against their will.

[A British public inquiry of the murder of former KGB agent Aleksandr Litvinenko, assassinated in London in 2006 with green tea laced with radioactive polonium-210, identified the 2 Russians who carried out the murder, but Russia refused to extradite them for trial]