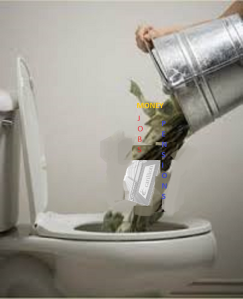 Well as many of us will now ‘know’, even if we hadn’t even heard of it a few weeks ago, that Carillion is a British multinational facilities management and construction services company employing 50,000 worldwide, consistently used by the Government for outsourcing major projects and public services, which last week has predictably gone under after a number of stunning profit warnings, despite the Government continuing to award it ‘major’ contracts when it was clearly in trouble and which an unviable company would never be able to perform.

Its liquidation is going to cost us, the taxpayer, many millions of pounds for sure, apart from the massive disruption that is going to be incurred on their failed contracts, but that disaster is going to be kept well hidden by the Government system, isn’t it? Oh yes, that is already self-evident when Treasury ministers admit that it is ‘going to be costly’, but then claim they have “no idea” of how much, nor even can they give a ballpark figure, eh?

WELL, WHY THE BLOODY HELL NOT? If you are a Government prepared to dish out massive contracts to a doggy outfit, at least you should have responsibly carried-out a full risk assessment and ‘quantified’ the potential financial impact on the taxpayer, surely? Not only that, but the facts are that the company was in massive debt, had severe cash flow problems and wasn’t paying its suppliers – so like a sinking ship, it will inevitably drag other innocent firms down with it (30,000?), causing without doubt abject misery and lost jobs & pensions to thousands of other workers.

Furthermore, back last summer it became clear that Carillion was a company stricken with an insurmountable financial crisis [spiralling debt – £700m in the first half of last year], suggesting that without serious financial intervention, the company would sink without a trace, analysis which sent its share price into freefall (not least because of aggressive hedge fund “shorting” of Carillion – when one of the UK’s most prolific short sellers made over £19m in just three days from such shorting).

Moreover, its pension fund deficit has been evident for some years and is thought to have more than doubled now to £800m? Why, why, why then, with the company on the verge of collapse and the pension fund clearly in the kackie, did neither The Pensions Regulator nor the firm’s pension Trustees act to deal with glaring concerns about pensions being at risk? How comes the Auditors and others including the Government, inexplicably conclude that Carillion was a going concern?

Now, how the hell do UK companies get away these days with short funding their pension liabilities leaving gaping funding holes, while still paying excessively high salaries & bonuses to the fat cats at the top, as well as inexplicably rewarding shareholders nevertheless with massive dividends – then explosively go bust and go under? Despite recurring abuse, the Government has repeatedly failed to impose company deterrents or to act to curtail those corporate activities that put pension schemes at risk, so pension schemes simply become insolvent, don’t they?

Yes, like two years ago at collapsed retailer BHS, where billionaire former owner, Philip Green, allowed extraction from it of hundreds of millions of pounds in dividends, despite the widening sinkhole of a nearly six-hundred-pound black hole in in the pension scheme for its 20,000 members? Or the hedge-fund asset stripping of Monarch Airlines whose demise that just last year caused furore within the travel industry, left the taxpayer with a £60 million spend on the repatriation of stranded passengers, and with the pension scheme dumped into the PPF (Pension Protection Fund)? Or, back in the early 1900s, Mirror Group’s owner Robert Maxwell’s £400m raid on its pension fund?

Historically, and certainly over the past decade there has been a consist gap between pension scheme assets and liabilities, which once again it is shockingly wide and has grown to something like £300 BILLION – worryingly that involves with the biggest deficits the likes of BT (2nd worse-funded pension in the World), Shell, BP, BAE, Tesco, Unilever, RBS, AstraZeneca, GKN, GlaxoSmithKline,?

[Oh yes, the statuary PPF pensions “rescue” scheme though funded by annual levy NOW, will most likely eventually fall into the taxpayer’s lap some time in the future (one in six schemes in the private sector are seen to be at serious risk, you see)? It has been running now for over a decade, and it offers ‘some’ level of pension compensation to those affected by insolvencies (nevertheless pensioners face losing many tens of thousands of pounds), BUT that not only neither solves the problem nor has it improved confidence in pensions schemes as hoped, has it? No, and the worst-affected ‘final-salary” pension schemes are only getting into deeper deficit trouble, it seems? The PPF is a lifeboat not capable of rescuing all those on the potentially floundering ships.

And another thing is that ALL our governments ‘have form’ in their bad dealings with pensions, haven’t they? Like in the late 90s when Labour Chancellor Gordon Brown scrapped tax relief on company money going into pension funds in a pensions heist that amongst other effects virtually killed-off ‘final-salary’ pensions. Like even further back, the Tories allowing companies to take pension contributions ‘holidays’ in heady days of stock market boom and not dealing with the consequences when events reverse. Like in the case of Equitable Life’s severe financial problems in 2000, with the government subsequently having to compensate one-and-a-half million of the savers for their ‘relative loss as a consequence of a decade regulatory failure’. Like the Tory government’s 2011 decision that instead of using the ‘retail price index’ measure of inflation, using the lower ‘consumer price index’, in a move affecting not only the state pension & public-sector pensions, but knocked off some £100 BILLION alone from private sector pension liabilities as well?

It has to be of serious concern that we are a society which is facing poverty in old age, as increasingly we are turning our backs on adequately saving for a pension. Long gone is the heydays of 1960s and 70s with a dozen millions of us with good pension provision, eh?

Many companies are becoming ‘unsellable’ to potential buyers simply because of their massive pension liabilities – like say Tata Steel was until last year when in a deal done with the Pensions Regulator it managed to ditch its £15bn in debt pension scheme, or perhaps Shell (nearly £7bn deficit), Sainsbury (over £1bn deficit), or the even the second largest life assurer and financial services firm the Pru, though it changed its pensions practices back in 2006 to plug a £379 million deficit in its pension plan.

Anyone who has any experience of placing major contracts will know that the first criteria to establish, is a bidding company’s viability and current business performance, surely? Amongst other things, one also needs to be confident that it has available the financial and technical resources to fully perform on time the contract being placed, and critically that they have completely established and costed the scope of work, to ensure that they make an acceptable business profit, and they don’t go bust so have to abandon the job before satisfactory completion – it is not necessarily the lowest price bid that should win a contract, is it?

Well that said, how comes the Government went ahead and placed half a dozen new contracts with Carillion in the backend of last year when its financial difficulties had been publicly announced, and those included contracts for HS2 [£1.4bn], Defence [£158m], and a DfT rail route electrification [£320m], but went ahead without the involvement of any top minister meeting with the company, either before or after? Surprising also, is the failure to categorise Carillion as a high-risk company requiring the appointment of a ‘crown representative’ to work with them.

It would appear that the company’s top brass might well have been aware of the impending financial doom, since shortly before the ‘shit hit the fan’ as the saying goes, the company suddenly ‘out-of-the-blue’ changed significant rules affecting the fat-cat bosses’ liability for clawback loss of their multi-million-pound bonuses in the event of the company hitting financial difficulties – all of course now at the expense of its investors, debtors, and indeed us taxpayers? WILL THERE EVER BE ANY EXPLANATION OR JUSTIFICATION OF THAT, you may wonder?

Without doubt NO, and neither will ANYBODY whether either a Carillion Director, or a Government minister, or a senior Civil servant, be called to account for this latest political fiasco and disgraceful business disaster, will there?

[The cynics amongst us will conclude that either the May Government were intent on keeping Carillion afloat, or there was a glaring dereliction of duty by ignoring warnings that the company was facing impending financial ruin, EH?]