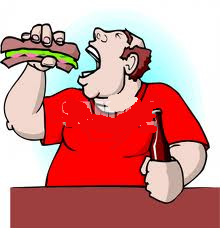 It is that time of year when many people recognize that they have put on weight, isn’t it? Yep, men will find that their tea shirts are over tight and shirt buttons are straining, or their trouser waistband hook & bar won’t close – so they try to blame their wife for shrinking their clothes in a too hot wash, don’t they? Women find that their favourite dress no longer fits and that their underwear is too tight – so they try to blame the fact that it is all too old and needs replacing, don’t they?

But, what diet regime will be popular in 2017, you might wonder? Will it be the 5-2 diet, the Atkins diet, the Avoidance diet, the Cabbage Soup diet, the Cambridge diet, the Diabetic diet, the Gluten-free diet, the Grapefruit diet, the Liquid diet, the Mediterranean diet, the Paleo Diet, the Raw Food diet, the South Beach diet, the Vegan diet, the Vegetarian diet, the Watermelon diet, the Weight Watchers diet, the Zone diet, or even a new one to add to the hundreds of thousands already out there? Will the approach be crash, detox, volumetrics, or based on low-calorie, low-carbohydrate, low-fat, high-protein, vegetables, or some other obscure fad?

Well, there is now a major problem in this Country in that there is ‘too much’ food around so people get fat, while of course in many places in the world there is often insufficient and populations simply starve to death. That problem here is compounded by the fact that we have been conquered by the supermarkets, who nowadays make obscene profits by encouraging us all to buy excessive amounts of food & drink – BOGOF, Two for One, BOGOHP, Three for the price of Two, WIGIG, Loss leaders, Promotional price, and similar marketing techniques, that not only persuade people to become at times obese (particularly as they also target the less healthy products), but lead to the UK dumping fifteen million TONS of food every year, no less?

For a quite astute and intelligent nation, the British seems to be pretty stupid when it comes to understanding food intake, don’t you think?

The basic fact though is that ALL food and drink (apart from water of course) contain calorific energy and our body’s digestive system efficiently converts that into blood glucose that is circulated around the body to replace the energy that cells have used-up in performing their functions. Any unneeded, and therefore ‘unused’ blood glucose, has to be stored for potential future need, and when the short-term store is full, it is then stored as fat in various places around the body.

Therefore, those of us who constantly consume more food and drink than we actually need for our lifestyle, will simply get ‘fatter’, ‘fatter’, and ‘fatter’, won’t we?

The dreadful ‘over-eating’ phenomena that the British nation is now in, has been exacerbated by major changes in life and work styles that have resulted over the past seventy-five years. In decades gone by much of the population did a lot of physical exercise through manual work, both in employment and in the home, together with getting about. Adult and children alike used to daily walk many-many miles, or sometimes cycled as well, because that was what living life was about – – but all that has been replaced by personal motor cars and public transport, hasn’t it? In decades long gone, there were no home labour saving devices (like washer-dryer machines & vacuum cleaners), nor private telephones (just a few Public call boxes), and at work there were no massive automated or robotic machines in factories (just tools, skills, strength and brute force), or JCBs digging trenches (just spades and pickaxes), or fork-lift trucks (just wheelbarrows & manual labour), certainly no computers to sit all day in front of (just a few typewriters & physically operated equipment), nor indeed mobile phones to keep people rooted to their spot (just the occasional landline phone somewhere), were there?

Not only that but it all starts younger as well, because our children used to safely ‘play-out’ from dawn to dusk (no cars or significant dangers around those days) and so were physically wacked before bedtime and slept well, and they don’t get the same effect nowadays using an X-box in their room for hours on end, do they? No – so we only get a different society full of obese children [these days twenty percent of them (plus another fifteen percent overweight), when there used to be none, eh?].

Surely, it is just ‘common sense’ to know that as you get less active or older and indeed more sedentary, your body need less energy. So why does everyone still keep stuffing the same quantity of food and drink into their eager mouths, eh? What do we think happens to all that excessive food energy, then? Well the answer is that it unhealthily increases our weight which then damages the body’s functions (including causing the explosion of diabetes), intensifies our girth around the waist which itself squashes the lungs leaving us short of breath – so we are even less likely to take any exercise that would help us use-up any of those excess calories, aren’t we?

There is of course a simple answer, isn’t there? YES., it is to reduce the amount of food we eat and the drinks we consume, so that it all matches (and does not exceed) the daily energy intake needed for our energy expenditure – that HAS to be the safe, healthy, long-term way of life FOREVER more, doesn’t it? That is why the short-term fad diets and other commercial weight-loss plans, can’t work, because nobody can stick with them for long, and as soon as the willpower is gone, and despite successful weight loss, people revert to their normal eating habits and the weight just returns with a vengeance, eh? All of us just need to employ proper eating habits to achieve long-term weight maintenance and that needs to take into account that our meals generally should be low in fat and sugar.

If you are already overweight and most of us are – over 60% in the UK, and we have the highest level of obesity in Western Europe – you will need to kick-off by loss of the excess weight and this can ONLY be done by reducing your calorie intake BELOW that what your body needs daily – so that it withdraws the extra energy needed from your stored fat, but it is best that this is done gradually over a period of months rather than in an immediate fashion, and this will be helped by additional exercise wherever possible. [If people are seriously overweight they should enlist the help of their GP’s surgery to ensure that their diet is kept healthy].

The most effective way of controlling weight is to eat the food that we personally like and usually eat – but in much ‘smaller’ controlled portions. However, in this Country we eat far too much meat for our own good; during the War years, the British were at their healthiest because of rationing, which ensured that all had the right food and no one went hungry– so per adult per week, beef/lamb was restricted to about 4oz (100g), as was Bacon and Ham, and only half that for Cheese and Butter, Eggs 1, Sugar 8oz (200g), Jams 1lb, Sweets ¼, Milk 3 pints. Yet nowadays we think that it is necessary to scoff much of that in a single day, don’t we?

Well each of us ‘needs’ a certain number of calories to ‘maintain’ weight and in the UK the current assessment is about 2000cals (women) and about 2500cals (men), but this can vary up or down depending on age and the burn-off level of physical activity – to lose weight one has to take-in LESS calories than is being used up, but they have to be from a healthy balanced diet, don’t they? [On Christmas Day, many people will have consumed as much as DOUBLE the number of calories they really needed – now stored as fat of course, eh?].

Alcohol provides a shedload of calories but no goodness whatsoever (other than pleasure, eh?), and that is why committed drinkers are going to find it hardest to lose weight or indeed to avoid getting fatter.

In deciding about our meals, we also need to take into account a number of factors though:

Taking exercise is essential to keep the body functioning, as well as to use up calories. Just walking a bit is good start for most people, however old.

Drink plenty of tap water and ditch bottled/canned drinks as they likely contain excessive amounts of sugar, salt, and additives (even the so-called Zero Coca-Cola cans!). Don’t drink orange juice at all, it is bad for you, is high cal and contains no fibre – eat a real orange instead, eh?

As a rule of thumb, we might work on a ‘basic’ food portion size for anything of just 4oz (100g). Well also, in the West, we eat much TOO much MEAT and that is ruining our health. Try to restrict your meat (including chicken) intake to be included in only ONE meal a DAY and of ONE 4 oz maximum portion only.

Alcohol:     2½ pints of cask-conditioned Ale will set a man back some 500 cals which is nearly a fifth of his DAILY total, while a woman’s cocktail Pina Colada also at 500 cals is a quarter of her DAILY total; two glasses of White or Red Wine (large) is also some 500 cals.

Bakery:      a serving of Pecan Pie means around 500 cals, while 1 jam Doughnut will log-up 250cals, as can a Scone with butter & jam or McDonald’s Apple Pie, though Shortbread comes in at 200 cals per 2 fingers

Ice Cream:          Energy dense and for the sweet of tooth – a Walls Magnum Gold will give you about 300 cals, as will a half-cup of premium ice cream such as Haagen-Dazs (chocolate peanut butter), or Ben & Jerry (chubby hubby).

Confectionary:   over 250 cals in a Mars or Snickers or Cadbury Whole Nut/Fruit & Nut Bar;

[The ‘New Year Resolution’ for 2017 should be to only stuff our faces with the calories that we actually ‘need’ for our ‘current’ lifestyle, and so keep our weight at the healthy level – no more short madcap diets, eh?].