There might seem to be a bit of a lull in the American Presidential nomination schedules, but they all are still motoring along, with continuing false headlines about the winners and losers (and some underhand ones to boot), coupled with obscene millions’ of dollars squandered in the process – isn’t it inconceivable that the main ones bankrolling this ridiculous financial extravagance don’t expect to get substantially rewarded if they have selected the winning candidate, eh?

The Democrats have ‘been West’ as they say and have peddled their wares in Alaska, Washington, and Alaska. The media is going berserk because the ‘trailing’ Bernie Sanders has absolutely trounced the ‘far-in-the-lead’ Hillary Clinton in ALL three States. What they don’t tell you is that in reality it is all a bit meaningless in the overall scale of things, because Sanders has only clawed-back a couple of dozen from Clinton’s big delegates lead, while she has at the same time added another score to her total numbers. There is no doubt though that Sanders needed these eye-catching performances to maintain the credibility of his campaign, but they hardly constitute infusing the critical momentum, implied elsewhere, that will secure him the nomination, does it?

Next month after Wisconsin (when honours are likely to be equal) and Wyoming (insignificant delegate numbers), this Democrat pair will face down each other in New York, and that will be the really crunch battle, as there are nearly three hundred nomination delegates to play for there. As NY is now Clinton’s adopted State, it is difficult to see how Sanders can steal a big march on his rival there, don’t you think? No. there isn’t going to be any trouncing involved, and once again Clinton will walk away with a sack-full of delegates to add to her haul, still leaving Sanders in her wake regarding numbers of pledged delegates. Sanders will be by no way done-for though, but he will nevertheless still have a significant mountain to climb, while Clinton hopes to simply walk up a steep hill, surely? 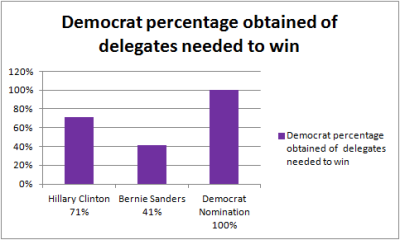 On the Republican side we are still having to wait for April’s Wisconsin for a further showdown, but though it only provides under fifty delegates, if may nevertheless be a pointer to future events. It is being said that the ‘leading’ Donald Trump could be beaten by the ‘second’ Ted Cruz, which would be a great blow to his ambitions and momentum, however close the vote. Then following Colorado (which could go either way), they head-off to the much bigger prize of New York with nearly a hundred delegates in play. That is where Trump can really halt Cruz in his tracks if he gets the decisive win he is widely expected to do – he would then indeed be on a long run in to reach the target number of delegates (or at least have a sizeable majority to go to the Republican Convention with in July), but the opposition would have been effectively crushed.