The madcap race to the US White House is through staggered State primaries and caucuses (running until mid-June) which continued yesterday with further jostling for position by the potential nominees in Florida, Illinois, Missouri, North Carolina, and Ohio.

As had been widely predicted by the American political soothsayers, both the frontrunners Donald Trump (Republican) and Hillary Clinton (Democrat) edge slightly further ahead of their immediate rivals, didn’t they? But again, despite the typical American style gung-ho type headlines, there are not really clear winners yet in either party, are there?

However, the one who can have most confidence of getting a nomination is Democrat hopeful Clinton, as she has fuel in the tank and the nominations to back-it-up, which her erstwhile rival Bernie Sanders currently lacks. Even if he succeeds in chipping away at the total number of delegates required for nomination, it is difficult to see where he is going to make-up the lost ground unless he trounces Clinton in the big boy States like New York (291 delegates) and Pennsylvania (210 delegates), surely? While Sanders may have grabbed another three hundred and fifty for his total, Clinton won hands-down in three States, so has collected & stacked-up nearly a hundred-and-fifty more than that, to add to her already substantial lead – she currently has as many delegates as he still needs to gain (but that doesn’t necessarily mean yet that it is all over, does it?). 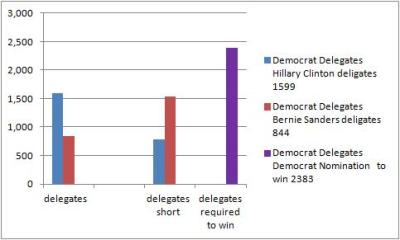 The chart above shows that Clinton continues on her forward march to secure the number of delegates needed, while Sanders will have to find another gear if he is to overtake her.

In percentage terms, Clinton was previously half way there, but is now even closer though not in touching distance yet, while Sanders has so far only got a third of the way to success.

On the Republican side, the wildly acclaimed so-called ’unstoppable’ Trump has also made further significant progress though, heading up in three States and in the process snatching another hundred and sixty delegates (primarily because he took the ‘winner-takes-all’ Florida State of 99 delegates),  while his rivals picked-up the crumbs really. Nevertheless, rank outsider John Kasich in his own State of Ohio did beat Trump (which could turn out to be a crucial slip-up in Trump’s quest), and while Ted Cruz has done about enough to stay in contention, the others look well out of it, don’t they? [Rubio is finished having even lost his own crucial State Florida] 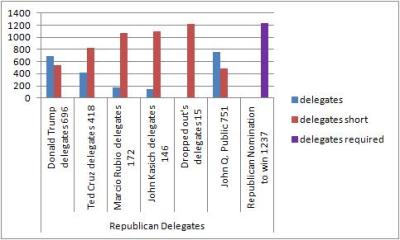 The chart above shows that indeed Trump is clawing his way up the ladder to nomination, but the big issue here is whether or not the Republican establishment will close ranks to deny Trump, the hated divisive outsider, the nomination many claim he is heading for with his appeal to the lowest possible denominator? It will though require getting behind only one of the candidates still left standing, and uniting their forces and delegates in favour of him (one John Q. Public), because then Trump’s lead will be wiped-out and his bandwagon will have lost a critical wheel, won’t it? Trump, no longer loved by Muslims, Mexicans, Women or his Political rivals, could be heading for a fall in the race, eh? 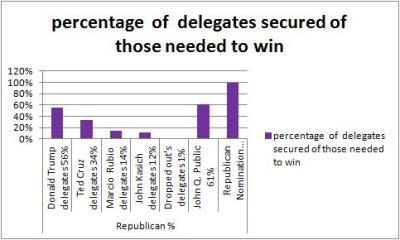 In percentage terms it will make a psychological difference that Trump is now over the half way marker, and that will surely focus the minds of the Republican hierarchy, don’t you think? Are we going to see a “Stop Trump at all costs” campaign kicking off soon, eh?

Trump has publically dragged American politics into the gutter and brought about an all time low in public political behaviour. Around the World, both leaders and public alike are aghast that the Americans seem intent on nominating such an unstable, clueless, moronic, unsuitable, inexperienced, loudmouth, racist individual, to stand for the onerous office of  ‘President of the United States’.