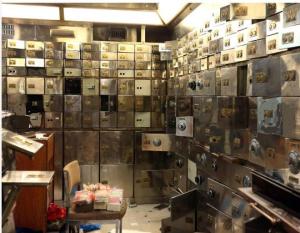 There is a well known idiom from the 1930’s “Crime doesn’t pay”, and this is a catchphrase regularly trotted-out by the Police and authorities as a caution to the criminally inclined, to deter them from illegal acts and it is a saying which implies that someone will be caught and punished accordingly & appropriately.

That is all a load of old tosh though isn’t it? Very often crime certainly does pay, wouldn’t you say? For the criminal classes it certainly provides a substantial living, and the big-shot professionals would laugh out of court, the very idea that it doesn’t pay, eh? Don’t believe a word of the sob-stories about the British gangsters who have fallen on hard times AFTER they got done, because they are the minority – and they and their families lived it up for decades beforehand on criminality, didn’t they? [And no doubt some still even have a shed load of dosh stacked away being used by their loved ones, eh?).

The latest example that drives home the precise fact that crime certainly pays, occurred last week when a gaggle of north and east London ‘career criminals’ [not always convicted when charged though] were sentenced at Woolwich Crown Court on Wednesday to derisory short prison terms, following convictions associated with a monstrous ‘burglary’ – four of them got seven years, one six years, and one even a suspended sentence.

Who are the names in the frame, then? Elderly ringleaders and kingpins John “Kenny” Collins 75, Daniel “Danny” Jones 61, Terry (Mr Ginger) Perkins 67, and still awaiting sentence the gang’s old boy Brian “the Guvnor” Reader 77 [who is suffering serious poor health] – who had all pleaded guilty; plus William‘Billy the Fish’ Lincoln 60, Carl Wood 59, and Hugh Doyle 49, who didn’t, but nevertheless were done for it.

Oh yes, nine suspects were initially arrested and certainly in this case the criminals (or some of them?) got caught and seven were ‘supposedly’ brought to justice (and one acquitted), but the sentences were so soft in relation to the enormity of the crime, as to make a mockery of the whole British criminal justice process, surely?

Mind you the law here for some unfathomable reason, already places a severe limitation on the sentences that can be passed for burglary [unlawful entry to a place to commit theft – not to be legally confused with robbery where the victim(s) is actually present].

It is pretty certain that there was another big player in all this though, perhaps who was heavily involved in the orchestration & actual planning, but who hasn’t been identified never mind caught – and probably never will be, despite a Met police bounty of twenty-thousand pounds on his head. There will also have been many others involved in the very successful final disposal of the loot, or concealing, converting, and transferring stolen property, seeing that certainly three-quarters of it hasn’t been recovered (and the convicted certainly won’t be blabbing or grassing-up anybody, will they?). Furthermore, it beggars belief that the erstwhile gang didn’t have the benefit of inside information and indeed specific help (with certain keys?), don’t you think? Yet nobody has been fingered – so have got away with it, haven’t they?

You see the above convicted had all been involved in reportedly the biggest, and one of the most audacious, burglaries and theft that Britain has ever seen in its history. Yes. a year ago, a London underground safe deposit facility, the Hatton Garden Safe Deposit Company, was successfully ‘burgled’ over a bank holiday weekend, with an initial speculative estimated two-hundred million pounds of stuff stolen – it was unlikely to have been anything wild like that, but who knows? It was substantial nevertheless (say twenty million pounds?), and you don’t get much bigger than that, do you? It is such a unique a knock-off that it is doubtful if anything like it will ever happen again this century, is it?

The joke on the authorities is that this massive heist was planned and carried-out basically by a group of four old fogies, indeed ‘has-been’ professional criminals with donkeys’ years of jail time behind them: that included convictions for involvement in other milestone major thefts, such as some thirty-three years ago, the east London’s Security Express depot armed raid [£6M- biggest-ever cash robbery at the time], followed the same year by Heathrow airport’s Brink’s-Mat warehouse robbery of gold bullion, diamonds and cash [£26M (today £78 million)].

These ‘Dad’s Army’ type guys may well have been in their dotage and so intellectually dull, yet they succeeded in tweaking the nose of a major financial institution, and their so called security experts, with some amazing long-term planning and astounding execution to boot (having gained entry through a lift shaft then drilling through the vault’s 50cm thick concrete walls), that will no doubt become legendry, don’t you think?

[How long then before a romanticised film about it appears on the big screen do you think? Ah yes, they will say it has been ‘dramatised’, but in reality you couldn’t get anything more dramatic than the real thing, eh?].

Some aspects of this burglary may be laughable, but its impact on the real victims of this crime is incalculable, isn’t it? People’s lives were wrecked by what may have been Britain’s biggest ever jewellery raid, and much of the loot will have been ‘uninsured’, because it was supposedly in an ultra secure & safe place. So we are left with many-many dozens of depositors some who have lost all, ruined jewellers’ small businesses no longer viable, beautiful and sentimental items of jewellery simply broken-up & sold-on, diamonds & other precious stones secreted-away, much precious metal (platinum, gold, silver) melted down to untraceable form, untold possessions shipped abroad never to see these shores again, longstanding family treasures and gems gone forever, valuables and heirlooms spirited away in the dead of night? Oh yes of course, the safe deposit company itself folded into the bargain, as it understandably soon became insolvent after such a massive hit.

Mind you, perhaps even some of those victims were also themselves criminals, as safe deposit boxes are often used to stash away beyond scrutiny stuff that needs to be hidden, eh? So has there been some element of ‘what goes around comes around’, as the saying goes?

Much of the mesmerizing and captivating escapade at the vault was caught on CCTV video, which was subsequently released by national newspaper the Daily Mirror, who cleverly nicknamed those involved as “Mr Ginger, Mr Strong, Mr Montana, The Gent, The Tall Man and The Old Man”.

Then as well, in true Keystone Cops tradition, our egg-on-the-face Met Police force, who got an automatic burglar alarm call from the deposit building (triggered by the gang) , just couldn’t believe that anything untoward was going on in there, so simply left the gang free to spend the rest of the weekend smashing open and riffling safety deposit boxes, eh?

Many of us will be amazed though that the four main culprits actually pleaded guilty, won’t we? Yes, traditionally criminals, particularly old lags, give it a go with their “innocent” claims in often the anything but vane hope that the system fails and they get off. Not this lot though – no, they were banged to rights this time, eh? Oh yes, as true to form of ‘old-school’ burglars, they left no prints whatsoever in executing their crime – but they were so old in the tooth that they didn’t know enough about modern deterrent techniques, like surveillance cameras taking their images throughout the heist, or mobile phone retrospective location tracking their movements and places, or car number plate recognition identifying where they drove to before & went afterwards, or incriminating telephone phone call recordings and the like, or even other things, like computer records of an OAP bus pass being use to get to the location, stuff that put them all at the scene of crime and the booty disposal, eh?

Nor did they seem to know that time has moved-on and police are now allowed to bug suspects and record their subsequent conspiratorial conversations and indeed be photographed at the time – the Crown Prosecution Service were more than elated & gratified to hear the illuminating and explicit conversations between gang members over their pints in the pub, and not least their boasting of how they had ‘got away with the crime of the century’, no less? But they hadn’t had they, as the police were quickly on their complacent tails?

They had also committed the cardinal sin of any competent burglar, by stashing away some loot at home, just waiting for the Police’s knock at the suspect’s door – that is what old-age does to you though, doesn’t it?

Why, you might wonder were the convicted treated so leniently? That is a question that many, not least the victims are asking, as it must rank among the worst offences of its type? Well, the ringleaders were rubbishingly portrayed in Court as being bungling, innocuous, cuddly old codgers, who wouldn’t harm a fly, when in reality they were anything but – no, just a crowd of hardened career criminals, some with violent records, who have brought sheer misery to many hundreds of others all their scandalous immoral careers. They were even given the maximum sentence reduction credit for holding their hands up to the burglary – but what choice did they have in reality? Then of course there is the inescapable fact that their advanced years brings with it illness and infirmity, so the likelihood was that they would end their days in jail – and that is what ‘should’ have happened, not misplaced sympathy & inappropriate hero admiration, surely?

The criminal justice system in this Country, is supposed primarily to appropriately ‘punish’, then give some justice to victims & society, followed by rehabilitation, and finally to act as a effective deterrent to them & others. In this case it has failed miserably, hasn’t it? The punishment has been inadequate, there is no sense of justice for anyone, these guys have repeatedly shown that they cannot be rehabilitated, and as for deterrence it gives the exact opposite message – stick with the criminal life, as the older you are the more likely you are to get away with it, eh? Many tens of millions of pounds of stolen stuff from this crime is out there and will remain so, to the benefit of these guys, their families, and associates. Well done the system?

Apparently the Judge admitted that the burglary at the heart of the case “stood in a class of its own”, but nevertheless decided that “it would be contrary to the interests of justice to follow the ‘sentencing guidelines’ in this case”; wot?

Don’t get your hopes up anybody that any subsequent ‘Proceeds of Crime Act’ proceedings will see a penny of the missing millions returned, will you?

[The other thing is that they will also get early release, so if their health allows, they will be back home in just a few years time to live it up with their families & friends on the proceeds of crime. So, crime doesn’t pay, eh?].