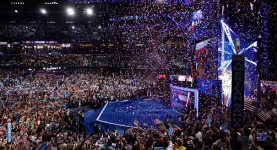 Well, well the latest nomination results are now in from the United States’ March 8 Primaries in a further four States – Idaho, Hawaii, Mississippi, and Michigan.

The media is once again full of hot air, which can be misleading for the general American, don’t you think? As usual the big drum is being banged for Republican current ‘front runner’ Donald Trump (apparently “resilient” and  “bouncing back”), as well as for Democrat ‘well behind’ Bernie Sanders (apparently “reinvigorated”).

While these two seem to get the positive headlines, it belies the real facts of where all the candidates for nomination for their respective parties have actually got to doesn’t it?

The only one that really seems to be steaming ahead is Democrat Hillary Clinton, who is quietly picking-up further delegates, win or lose, euphoria or despair, in a particular State. She is now over the halfway line in the number of delegates she needs to get the nomination. Her only rival is still trailing well behind.

Batting for Republican nomination we have Canadian born Ted Cruz, who is running second, but only eight points behind Trump, who we keep being told is strenghening his case & looking ‘unbeatable’. Well the truth is that Trump has probably shot his bolt already, as he has had to modify his crass appeal to the lowest denominator, and to pretend that he is really a ‘peacemaker’ and ‘conciliator’, no less. That stance can only distance him from the bigots he appeals to, while still alienating him from the bulk of the Republican Party. The other candidates seem a long way off so it is difficult to see what could happen to allow them to suddenly break-through, wouldn’t you think?.

There is a month of Primaries under the belt a lot of piffle is being spouted both in Britain and across the water in America, isn’t it. The runners are hardly out of the blocks really, but the know-all pundits seem virtually to have the two candidates on the Presidential trail already, if not actually ensconced in the White House, don’t you think? After so-called Super-Tuesday ‘All done and dusted’, as the saying goes, eh?

The claim of course is that one of the jousting champions for each of  the parties [Republican & Democrat] have already unhorsed their opponents. Is that really credible, based on the facts? You don’t have to be an expert political analyst to see what the figures tell us, do you?

The ones being given the nod are loudmouth bigoted dingbat and ‘non-politician’ (until now) ‘hate me’, one Donald Trump for the Republicans, and ‘not as squeaky clean’ as you might think but the most experienced of all politicians in the race ‘love me’, one Hillary Clinton for the Democrats

Trump indeed has had some remarkable success so far to the ire of his critics, so he is being described as unstoppable, no less? Well, it is inconceivable that the experienced guts of the Republican Party will allow an interloper, who’s despisement of them has been made crystal clear, will actually allow him the nomination, isn’t it? The numbers show that Trump is a mile off reaching the number of delegates he requires. However, if he continues to do well in trouncing the others, through his bile appeal to the politically disgruntled, it is highly likely that a ‘consolidation unifying candidate’, one John Q. Public, will immerge from the others, so all their delegate assignments are likely to amalgamate – Trump will probably get none, and that will finish him off. don’t you think?

You will see from the numbers above that Trump is in fact only marginally in the lead and indeed needs to nearly quadruple his number of delegates to win.

If all the other candidates join forces in favour of one of them, they will be nearly five percent ahead of Trump at this stage, won’t they?

Things are a bit more cut and dried on the Democrat side though, as there are really only two candidates still left standing – front runner Clinton and ‘old-in-the-tooth’ senator Sanders. As the primaries kicked-off and Sanders did well, they all said he was going to upstage the favourite, didn’t they? That was silly, because while Sanders tirelessly worked his ticket with the voters to secure delegates, canny Clinton was using her energy and nous to collect a substantial gaggle of so called ‘super-delegates’ (the ones who aren’t constrained by public vote), so in reality she was streaking ahead, wasn’t she?

The numbers show that Clinton has a substantial lead, with one-and-a-half times MORE delegates than Sanders 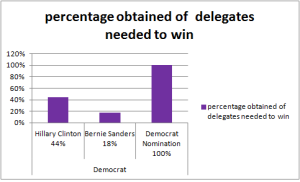 From a percentage point of view Clinton is in an impressive position in the race and showing clear water, don’t you think?

The conclusion of this blogger is that that Trump will fall by the wayside as the Republican Party’s knives butcher him – he won’t be pursuing his punch line “I will make America Great Again!” But who will beat him to become the Republican nominee, eh?

Clinton’s second attempt to run for President should this time come to fruition – so she might get the chance to put across her claim that “America has never stopped being Great – but we need to make America whole again”, but we will see, eh?