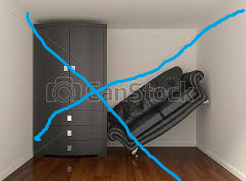 The last British Government (a coalition headed by the Conservatives) introduced in 2013 the nicknamed Bedroom Tax on the poor, which has been widely condemned for being unjust and a politically contentious policy by those on the moral high ground. The tax has reduced housing benefit for all individuals who rent a Council or Housing Association property which the authorities ‘deemed’ to have more bedrooms than they really required.

The consequence of all this is that the legality of the Government’s hated new tax has been legally challenged in the courts, with mixed outcomes, it has to be said? The latest news on this front though is that the Court of Appeal, in a non-political judgement, has just yesterday determined that some of those adversely impacted by the tax, have been discriminated against and that it is unlawful, based on their human rights.

The court of three senior judges, has agreed with the law challenge of two distinct individuals, one a victim of serious and significant domestic abuse, and the other involving the home of a disabled very young teenager with a rare genetic disorder causing grave mental and physical disorders requiring 24hr care. They had argued that they should be in the category that the bedroom tax rules should not apply to, and they defeated the Government in this high profile and legally noteworthy case. The Government hates to be held to account, so it’s nose was most soundly put out of joint, as they see this as the thin edge of the wedge (though it is likely to apply to only a few hundreds of households), so they intend to apply (at a unjustified enormous taxpayer cost, to boot) for the ruling to be reviewed by the Supreme Court, the highest court in the land, no less. [It replaced the previous House of Lords court some six years ago].

The Supreme Court normally sits with five judges, and cannot overturn Parliament’s ‘primary’ legislation, except where it breaches human rights (as has been decided in this specific case by the Appeal Court). Is the Government, with head-in-the-sand attitude, simply embarking on a worthless fruitless idealistic exercise?

What do you think? One property involved in the dispute had been specially adapted by the Council & Police at public expense to include a secure ‘panic’ room, but this was now deemed to be excessive accommodation – it will be if she is finally murdered, won’t it? The other successful appeal centred on the so-called spare room used by external carers, who have to stay overnight at the three-bedroom home The government say the tax rule still applies in the case of a disabled child but not for a disabled adult – by what logic do they work that one out then?

Will the Supreme Court really conclude that the Appeal Court got it totally wrong to say that the Government cannot lawfully discriminate ‘without justification’ against endangered domestic abuse victims and seriously handicapped children (so they have to rely on short-term discretionary support – which is often refused)?

Ah, but this is not the first legal challenge on the erstwhile unjustified bedroom tax to end-up at the Supreme Court though, is it? No, certainly not, as last year a group of people with disabilities were given leave to have the legality of the new housing benefit regulations heard by the Supreme Court this coming March. The Government may be on stronger ground on this one though (unfortunately?) as both the High Court and the Appeal Court have previously found in their favour. While the High Court had decided that there was discrimination against the disabled it was nevertheless justified so still ‘lawful’. However, following the hearing and what was said, the Government exempted households from the tax where disabled ‘children’ were unable to share a room because of their condition, without doing the same for disabled ‘adults’ in equivalent situations – how comes?

This unpopular controversial bedroom tax is all part of the Department of Pension head, rich Tory Ian Duncan Smith’s drive to attack the most vulnerable in UK society by slashing welfare costs (in this case some half a billion pounds a year from those on housing benefit). The claimed objective of the Government is to force people to move into smaller accommodation (when actually none is available and not on the stocks to become available, is it?). The Government persists with this pernicious tax (held in wholesale disregard by the general public), in spite of increasing evidence that it actually increases the housing benefit bill, harshly punishes the poor, widely increases poverty, and unjustly discriminates against disabled people.

The only hope for those trying to oppose the misery of this tax, is the Courts – with Labour out of power for five years (if not longer), the House of Commons without conscience has repeatedly let them down, when even appropriate action gets voted down time and time again (with some MPs even ‘no-showing’), sometimes quite narrowly, doesn’t it? [like 252 votes to 226 (majority just 26), or 298 to 266 (majority only 32)], while Scot IDS himself outrages opponents by laughing and joking during these debates (You see, his wife’s father’s owned estate provides him with his own accommodation of a very comfortable country house, which has of course multiple spare rooms, so he is all right Jack?).

[The British public are waiting to make judgment on the Supreme Court, with the first Bedroom tax case now only a short two months away – and that will signal how it is all going to go, won’t it?].