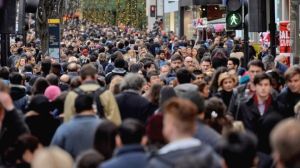 Much of the population in Britain are financially feeling the pinch in these difficult times of austerity. Making ends meet has become a major struggle and many families are relieved to get to the end of the month and still be solvent, aren’t they?

It comes as a great surprise to many then, to see scenes on the television of major High Street shops packed with hoards of crazed ‘bun fight’ shoppers grabbing armfuls of goods like no tomorrow – with associated minor assaults, threatening behaviour, shopworker abuse, and crowd control problems. It comes as an even bigger surprise to read in the newspapers of the massive amounts of money that are being handed over willy-nilly to retailers in our stores and online, isn’t it? Has consumerism gone mad?

Certainly, most retailers are having a difficult and slump time just now with so little spare money around, hence are resorting increasingly to promotional ‘Sales’ as the only way to drum up some much needed trade – and into the bargain are offering massive discounts on the goods they are trying to shift from their stock. But consequently large quantities of money are rattling into the UK cash registers far and wide.

The American inspired December weekend Sales on so called ‘Black Friday’ (the retail event, not to be confused with the infamous UK’s revellers’ induced black Friday, the last before Christmas, which the Police and emergency services dread), previously introduced here by Walmart’s ASDA a couple of years ago, and the follow-on ‘Cyber Monday’ which now have crossed the pond to be fully embraced in the UK – retailers have turned it into a four day extravaganza here and indeed many of them continued the Sale into the following week. This has suddenly become a really BIG event i Britain, and the previous cash generating levels of around £1bn have this year been more than trebled over the full weekend (£1.1bn, £561m, £676m. £968m on respective days), much exceeding analysts’ expectations. It has to be remembered that this has all come about before the bulk of Christmas shopping has taken place and long before the traditional post-Christmas Sales have hit us (24th Dec Christmas Eve & 26th Dec Boxing Day) – not forgetting of course ‘Giving Tuesday’ (1st Dec – giving to charity rather than taking), ‘Small Business Saturday’ (5th Dec – campaign to gender support for small business when some five hundred million gets spent on the day) and ‘Manic Monday’ (7th Dec – said to be the biggest internet shopping day in Britain, possibly even equivalent money wise to Cyber Monday), either, eh? All that to be followed of course by the traditional New Year Sales – but will there be any money left if five billion has already been spent online, do you think?

So, consumer spending has certainly absolutely soared in some respect and much of it this year has been simply online, where growth has been particularly rapid (with the increasing ‘click & collect’ features and escalating smart phone transactions) – on occasions unmanageable traffic crashing the websites of some major retailers like Argos, Curry’s, Tesco, & Game. However, the foot shopper numbers using the High Street suffered drops and trade was not helped by mild and warmer weather knocking-out the usual winter desire to buy coats, boots and knitwear. Nevertheless multi-millions still hit the shops for the Boxing Day sales and delivered many billions into the tills.

The biggest Department stores like Harrods, Selfridges, Liberty and House of Fraser will have done well but were offering designer goods at a fraction of their usual price, while both Next and Marks & Spencer have launched discounts of up to 50% on Sale items. A hundred million will be taken by retailers in London alone. You can though be certain of something and that is that there will be clear winners and losers this Christmas – some major retail players have issued profit warnings and more are on the way..

There is also another downside of course. Shopping habits have changed, so while the internet has surged, ‘overall’ retail spending has been virtually flat year on year.

Notwithstanding that matter, the total amount of money blown for this Christmas in the United Kingdom is still mind blowing, don’t you think? It then begs the question as to where it has all come from, doesn’t it? Was it spare cash from earnings? Unlikely? Was it savings? Improbable? Was it gifted? Doubtful? Was it spent using a Credit Card? Most likely? Was it borrowed on an overdraft? Feasibly Was it money from a Bank Loan? Possibly? Wherever the billions came from, it is odds-on that it is going to have to be paid back sometime, wont it? The money well have boosted the economy for now, but there will be a price to pay later-on don’t you think?

There will of course be one set of villains who will make a killing, won’t there? Yes, the vile over-rewarded dodgy Bankers no less. These money men (who have already bankrupted the Country, caused the recession, and severe austerity) simply borrow money from the Bank of England for half a percent and then lend it to us lot, charging ten times that as a bank loan (with as long sometimes as ten years to pay back), a massive sky high fifty percent as a credit card spend (if one has a patch credit score) , or an eye watering seven thousand percent ‘pay day loan’ from some operators. The profits amount to billions which these non-deserving fats cats quickly trouser, eh?

[Ah well, happy New Year to all and sundry everywhere – may your own personal resolutions for 2016 all come to fruition]