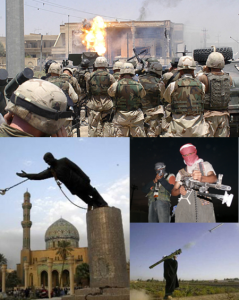 The history is that a dozen years ago Britain joined a coalition with America to invade Iraq. The excuse was that its long-time Dictator Saddam Hussein would not cooperate with UN nuclear inspections and was hiding weapons of mass destruction that represented an immediate threat to us in the West – it all turned out of course to be totally false information, if not lies. Many sceptics however believed at the time that the simple objective was the USA’s wish to achieve regime change there, and if so it succeeded admirably, didn’t it? Oh yes, the inadequate Iraqi forces were quickly annihilated by a ‘shock & awe bombing slaughter (some sixty thousand killed or injured), and Hussein was deposed, tried, and he and his cronies duly executed by a military court a few years later.

There is a saying ‘Be careful what you wish for’ and we should have been mindful of that, shouldn’t we? The deposal of Hussein, apart from causing many hundreds of thousands of lives, and eye-watering enormous cost, has opened Pandora’s Box hasn’t it? It has created a power vacuum, so not only did Iraq itself degenerated into an out-of-control security-less land of widespread sectarian aggression, that has been devastated by violent insurgences, including now becoming a stronghold for the ISIS terrorists, but it has also led to other major regional conflicts – well done us?

The human cost has been substantial on Iraqi civilians as well, and with also neigh-on forty thousand coalition troops killed or injured (mostly Americans). There has been a groundswell of feeling in the UK that we were dragged into an unnecessary and disastrous war in Iraq by US President George W Bush and there was distress amongst families that their lives have been devastated by the loss and injury of loved ones – so they want answers about why and who, don’t they? No such answers yet though. [UK military – 179 dead and 315 injured].

Over six years ago, Labour PM Gordon Brown setup an inquiry into this War under a former government senior civil servant – a secret and restricted inquiry though, to be run by one Sir John Chilcot. We can’t be sure exactly why Brown did this – perhaps to annoy his arch-rival predecessor PM Tony Blair who took us into the war? Anyway, you have to understand that the only reason UK Governments establish any inquiry is to kick the ball into the long grass – and that is precisely what has happened under Chilcot, hasn’t it?

No Report yet, but he has now promised that it will be published NEXT year in the summer – that means seven years in the making, eh? But what did we expect from this subservient guy with a poor track record on inquiries, who is used to following orders from Ministers and certainly has no skills or experience of taking them to task, or shining bright lights in their eyes to solicit information and get to the truth – he is a Rottweiler NOT.

It is now a total of four years since the inquiry completed its hearings, so it is to take three years of writing-up before we see the results – unbelievable, ludicrous, and disgusting? Frustrating and disappointing certainly, but what is the excuse, eh? Apart from a lack of cooperation from the Americans, it seems that those who have been criticised have dragged their feet over their right to respond as part of the so called Maxwellisation process – but why has Chilcot allowed them to get away with it? Why were they not given only a few months to respond to anything that concerned them? Furthermore why was Chilcot not given a time limit in his own brief, so that he HAD to restrict people’s time to reply – no court of law in this Country would have allowed such a fiasco in a trial, would it?

Tony Blair has been widely blamed for major delays – which he denies of course. Without doubt his name will be in the frame as a target for criticism in the Report, and the indication is that he is trying to pre-empt and ward-off any personal attack by getting some qualified apologies in early (while side-stepping personal accountability), as he did a few days ago.

[Indisputably, Tony Blair and others got it wrong on Iraq, and we don’t need Chilcot to tell us that, but we want him to throw light on what happened and explain it to the British public].