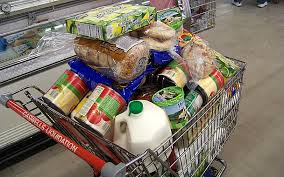 Well the big supermarkets in BRITAIN are certainly in the mire aren’t they? The big four chains of Tesco, Sainsbury’s, Asda and Morrisons’ market shares are dropping like a stone, In the past year we have seen market leader Tesco crash & burn, haven’t we? We have seen also the other big operators traumatised by the new kids on the block Aldi & Lidl, small but who grow stronger all the time. These German budget operators have stolen a march on the established grocery based money spinners – because of the recessional type impact on peoples’ spending habits, to be sure.

The previous successful lure of the glorious out-of-town, over smart, overstocked, overrated, shopping venues, generating a ‘high of price’ overflowing shopping trolley, has well and truly evaporated now, hasn’t it? Even the rich and upperly-mobile have abandoned all of them (apart from upmarket Waitrose), to head down to the smart less, stack-em high pallets of the sell-it-cheap budget chains, haven’t they?

You see, the problem was that the supermarkets had never had it so good and milked the system to death, generating profits to make your eyes water. Traditionally the mark-up on food was always less on the Continent and in the UK the retailers were a lot more greedy – but they got away with it for donkey’s years didn’t they?

In the old days of Tesco (who started as London market traders), they were themselves operator truly of a sell it cheap and a stack it high in unsightly wire bins, in tiny stores in the small towns close to their Cheshunt base. Over fifty years later it had all changed hadn’t it? They had become the all powerful, destructive, dominant, top retail operator, who couldn’t make a wrong move, and had established a customer base whose loyalty defied logic. They became a Bank, mobile telecoms operator, and everything else. Then the bubble burst two years ago and the love affair was finally over last year, don’t you think? While they are still dominant in the UK market, some fifty stores are closing, possibly two thousand staff being sacked, and shares dropped by half. Sad eh?

The public had woken up and had seen that Tesco had overstretched themselves, didn’t care about them really and that they were just the cannon fodder needed to generate even greater profits. Equally some of the same applied to the other bigboys – all using marketing ploys and BOGOF type offers to bamboozle the customers (instead of providing cheaper prices), and unfairly driving farmers and other producers out of business to boot.

They are all suffering a battering – with half of British households now using the less expensive alternatives like Aldi & Lidl (as well as internet shopping). For example Sainsbury axing say five hundred jobs; Walmart owned Asda restructuring cutting over a thousand jobs ; Morrisons with a dozen store closures planned and the top man gone; the Co-op (while dealing with the scandal of their Bank & its chairman’s problems!) announcing a year ago plans to close two hundred of their large stores in favour of fewer smaller units – it has closed some more stores this year already.

[The long gone days of the friendly staffed High Street grocer, with muddy potatoes served from hessian sacks, the likes of dried peas and arrowroot crackers dished out from glass containers, Brooke Bond loose tealeaves dispensed from a jute sack into a brown paper bag, whole cheeses to die for and cut (after tasting) with a wire, and real butter patted out from a slab onto greaseproof paper with a spatula, all placed in your own sturdy proper shopping bag, are not even distant memories for most of us – all destroyed by impersonal, impoverishing, immediate, immeritorious, supermarkets?]