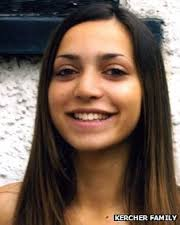 Nobody knows the name of Meredith Kercher do they? She was a twenty-one year old Londoner shockingly  murdered in Italy seven years ago. Mention though the name of another similar aged young woman at the time Amanda Knox, an American, and people will recall it well. She is one of those three convicted of her flatmate Meredith’s murder. Why do the victims always get forgotten while the notorious are invariably remembered?

The trial is a saga that would be ridiculed if published in a crime book. In Italy the route to final conviction is torturously long it seems. Knox was convicted of murder and spent four years in prison, before being ‘un-convicted’ three years ago on appeal. She was released, so immediately headed back to the States. She has stayed there safe from Italian justice ever since. However, then she was ‘re-convicted’ earlier this year. She has now a final appeal in four months time to the Court of Cassation in Rome [the Supreme Court], and her chances of getting off don’t look bright, as it was that court that played a crucial part in her re-conviction.

Knox didn’t keep her head down when she got back to America, but instead embarked on a personal promotional campaign that seemed to denigrate the memory of poor Meredith – she even wrote a money spinning  book. Was that wise we might ask?

If her appeal fails and her conviction stands, then the Italians will want her back to serve the rest of her sentence, won’t they? Knox will certainly not catch the next flight back to Italy will she? No she will have to be extradited, otherwise she will stay put.

Knox has generated a hugh level of support within the USA with her public PR company’s  organised pleas of innocence and persecution by a flawed anti-American legal system in Italy. She hopes obviously that this will help her cause and thwart the extradition process. But will it? Do you really believe that the American legal system is going to internationally belittle the respected legal apparatus of a major European country like Italy, challenge the decision of their highest appeals court, conclude that their interpretation of the Italian law is flawed, and refuse to send back a convicted murderer? Doesn’t sound likely does it?