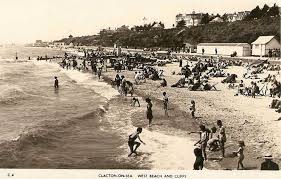 There is a watershed by-election about to arrive next Thursday (October 9) in the sleepy, half dead, home of the beach-hut, seaside resort sixties place of Essex’s Clacton-on-Sea, surely? Normally with a significant by-election being ferociously fought, it is all over the newspapers – but have you seen any trace? Probably not and why is that? Simply because there isn’t much of a fight going on – a ‘safe’ Conservative seat, they have already conceded to UKIP! The British press is predominately Tory with a little Socialist presence (and neither want to give any column inches to Nigel Farage’s party do they?) and there is certainly no UKIP rag to trumpet their charge, and predict the humiliating .defeat of the Tories.

The seat was won at the last General Election by one Douglas Carswell with a massive Tory majority. As a Eurosceptic himself, he got fed up though with PM David Cameron’s EU promises, and also the Conservative party’s lack of promised action (modernising politics, MPs recall, border control, reducing government, bank reform, cutting public debt), so he slipped into the ranks of UKIP, resigned as MP, and seeks to take it all back in new colours – and he is so personally popular that he is a dead cert to do so, don’t you know? The Tories are offering a local lightweight Giles Watling, Labour with ex-local of suspect character Tim Young, and the LibDems a non-local no hoper Andy Graham. [No need to bother with daily polls in this one at least].

Exactly why is this ‘particular’ by-election a pivotal turning point in national politics then? It is because it heralds the win of the very FIRST parliamentary seat at Westminster for UKIP, no less. Massive Conservative effort and resources finally saw them off in last year’s Newark by-election, but not this time round eh? Almost unnoticed, UKIP have been winning support at grassroots level and steadily getting nearly four hundred councillors elected (with a quarter of the vote where they stood); then they also have had considerable success of course in our national EU elections (increasing from 13 to 24 MEPs last year, surprisingly even winning the popular vote, and soundly beating both Labour & Conservatives); but not a single Member of Parliament elected yet (however with the main parties’ UKIP deniers hiding their heads in the sand, saying that UKIP don’t have the resources, nor local infrastructures, to win Commons’ seats).

Some predict that Clacton and the first UKIP elected MP, will start the avalanche, breach the dam so to speak, or be like a raging river breaking its banks and flooding the land. We will see won’t we? And the evidence may be with us sooner than you might think!

You see, Clacton is NOT the only by-election on the tracks is it? Oh no, there is another one on the exactly same day at Manchester’s Heywood and Middleton constituency. Labour and Leader Ed Miliband , are the most worried ones here though, despite shoddy politics in calling the election early (even before the funeral of their previous MP). At the General Election only four years ago, UKIP polled a derisory few percent, whereas now they are polled as running second with some thirty percent –coming up on the rails as they say! UKIP are apparently taking support equally from Conservatives & Labour and there is also a rump of people who didn’t vote last time, who may well hold the key to the outcome. If UKIP hit the front in the next days and win Heywood against the odds, then “aces wild” – an unpredictable UKIP success & General Election in the offing.

Only a little further down the track but approaching fast, is another by-election though at Rochester and Strood in Kent. This is another one like Clacton where the sitting Conservative MP Mark Reckless, out of the blue, resigned his seat to transfer his political allegiance to UKIP (he didn’t believe Cameron was sincere in his views nor was he serious on renegotiating within the EU). Reckless made a striking escapade of it all by appearing just over a week ago at the UKIP annual conference to announce his decision – and by doing so on the very eve of the Conservative’s own conference cleverly got maximum publicity and certainly put the mockers on that! He was the second one in a month to defect. The news for the Tories is anything but good in this. They were incandescent with rage, denouncing their previous ‘honorable member’ and ex-friend as a dishonorable beer swilling racist serial liar, and worse. But it doesn’t all end there does it? No he intends to fight for his seat again as UKIP, and first indications are that he is in with an excellent chance; the early polls indicate that he is streaking ahead of Conservative & Labour with some forty percent of the vote (with the LibDems annihilated again of course). THE DATE FOR THIS BY-ELECTION HAS NOT YET BEEN SET as the Commons is in recess, but it can be expected next month.

These three by-elections really can alter the face of British politics (but UKIP was described in the past by a heavyweight Tory Minister as ‘a collection of clowns’ – not so funny now eh? The momentum is behind UKIP, and has been for quite a while now. However, breaking through to Westminster representation will be the catalyst perhaps? Many more Tory seats than they admit are going to be vulnerable to UKIP, and while Labour wouldn’t perhaps suffer proportionately in existing seats, you can bet that they too will be hit, particularly as UKIP could win many top Labour target seats. The LibDems are terminally ill having lost two thirds of their voters, with a Leader Nick Clegg, who is unwanted by activists and is a populist liability, and who many parliamentary candidates don’t even want on their campaigns!

[The biggest political landslide in modern history was suffered by PM John Major in 1997 with the loss of more than half of his MPs. Might we see an equivalent opposite for Nigel Farage & UKIP in 2015?].