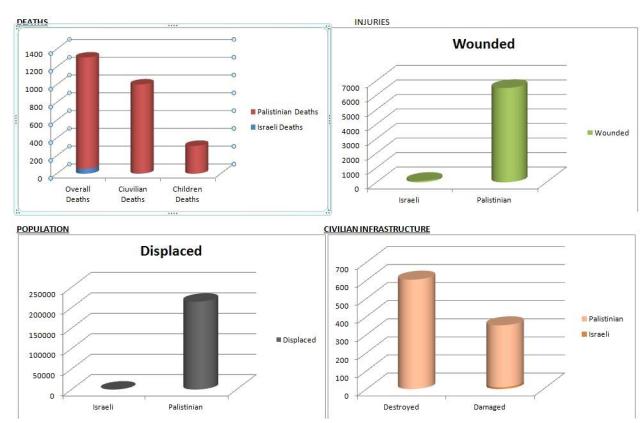 Gaza is a ‘tiny’ overcrowded strip of land of  under a hundred and fifty square miles, so only four to eight miles wide and twenty five miles long, but home to about two million Palestinians. Occupied by military force by Israel for more than twenty five years, but now for twenty years ‘self governing’ but nevertheless still under severe restrictions & control by the Israeli Authorities

A sickening scenario where blatent killers are unleashed and no God will forgive them nor our World  politicians who speak  with a forked tongue – do YOU sleep well at night while this goes on . NOTHING we all can do legally shame about that yes?

More Gaza men women & children DEAD – body count Eight Hundred, but the Israelis are resilient and they say they   will carry on killing   – they don’t give  a shit about World opinion or UN condemnation [secretely perhaps they would like a few more of their solders killed to justify their claims to only be defending themselves]

You don’t have to know very much to have predicted today’s horrific situation in the Middle East, do you? How comes then that those in power & those with influence & those with responsibilities have dodged it? [this post said a thousand Palestinians would be killed].

The annihilation of the population of Gaza continues apace, with houses, hospitals, schools,  and everything else a legitimate target– already some seven hundred and fifty souls dead (at least eighty percent innocent civilians and  a quarter of them  CHILDREN) and countless injured   (certainly five thousand) . The Israeli killing machine is in overdrive now.

Hang your head in shame Israelis.

The United Nations suspect that war crimes have been committed – but will they take any action? Dream on! Condemnation of Israeli ‘disproportionate and indiscriminate’ attacks at an emergency meeting was opposed by the United States of course and as usual we British together with the other EU members couldn’t bring ourselves to criticise Israel (just WHY is that?).

Will the killing end? Will there be a truce and a ceasfire?  Will Israel finally now end its eight year siege & blockade of Gaza? Don’t hold your breath

[It all begs the question now, even from the uncommitted, & previous supporters, or even admirers, of Israel

“Did Israel ever ‘have’ the right to exist”?

“Has Israel ‘earned’ the right to exist”?

“Does Israel ‘deserve’ the right to exist”?]

ARE YOU ALL PROUD?

Palestine is a terrorist place isn’t it? Not really.

Well, it’s a country where there is a lot of war then? Not quite what it seems.

It is not realy a place is it ? No, but a region that we in the West, and probably perticularly in the UK, only know though that it is reportedly an ancient land in Asia, home to a lot of Arabs, close to the Mediterranean Island of Cyprus and also near Egypt, two places where many of us holiday. We know so little, but do we care? Perhaps we ought to? Are we still human?

It’s a region of some history as well, and indeed the origin of both the Jewish and Christian religions, so perhaps many of us owe it a lot? It has had a chequered history because of its strategic influence, so it has been often taken control over – and of course the British had their decisive bite at the cherry as well, some hundred years ago. Therein is the root of the current problem in those lands. After World War 2 it was decided to create a State of Israel there (a reactive response to the German’s holocaust) and as this was not accepted by the local Arabs this led to civil war – which enabled Israel to capture substantially more land than granted them. Some three quarters of a million Palestinians were displaced.

A further war, known as the Six-Day War, nearly some fifty years ago now, allowed the Israelis to capture even more other significant local regions – the Sinai, the Gaza Strip, the West Bank, part of Jerusalem, Lebanon, and others, whereupon they embarked on a policy of Jewish settlements there in ‘occupied territories’ (a traditional way that all conquers always take-over and govern other peoples countries); all against international law of course, but why should they care?

The justification for Israel’s annexation and occupation of other’s lands together with their decades of oppression of enemy peoples, and the declared ‘illegal’ imposition of laws & administration, is that it is essential for the protection of their country’s security. Somehow or other, Israel have managed also to secure an enormous amount of sophisticated modern weaponry, as well as a substantial nuclear capability – which they never admit to (how did they get all that secret information involved and then the materials and machinery to achieve it?). Why did the international community and the United Nations not put a stop to all of that and the massive unauthorised expansion to their land? Friends in high places, spies, and traitors, in other countries perhaps? Not all necessarily Jewish of course.

The massive land of the Sinai Peninsula was finally returned to Egypt some fifteen years after having been seized by Israel – how did they get away with that for goodness sake? There also was an Israeli withdrawal from the Lebanon, as well as the Golan Heights, but there have also been recorded massacres carried out by the Israelis, for which there has been no international retribution – one asks why not?.Most of us don’t know all the things that have gone on – but we do know that it has been a disaster for millions of people and the Israelis have been at the heart of it.

In WW2 the Germans under Hitler annexed most of Europe including France. Despite the sickening accidence of the collaborative Vichy government, a ‘Resistance Movement’ of the French people rose from the ashes of defeat. These courageous people, young & old, men & women, set out to destroy their oppressors in any way possible – they paid with not only with their own lives but also those of their loved ones, as well as their communities, and even often those not directly involved – the Nazi SS were an evil and vindictive adversary. The British, to support the brave patriots, sent facilities and spies (many who were identified, tortured and killed for their courage). The French Resistance fighters weren’t terrorists though– no they were revered as brave hearts that played a major part in the Allies winning the war no less.

A barrage of unsophisticated rockets have been fired from Gaza by Resistance’rs/Rebels/Terrorists (depending on your view) towards the Israelis – apparently causing no deaths but nonetheless severe anxiety to nearly a hundred scared individuals; so a hundred and fifty guilty/innocent (depending on your view) Gaza Palestinian men women & children have paid the price with their lives, and many others have been injured, with their even basic houses destroyed. The civilian population have now been told by the Israelis to flee their homes as worse is to come. No conciliatory thoughts by the Israelis are there? No understanding of the root problem then? No thought of a solution from them then? No, just brute force, and a demonstration of undeserved military firepower and overwhelming supremacy – so massive killings will result of the resistance (perhaps?), as well as many other ‘cannon fodder’ innocent men, women, and children. Israeli leaders have been unashamedly upfront about it – they don’t give a shit for rights & wrongs or even international condemnation – so they will probably kill a thousand souls by the end it won’t they?