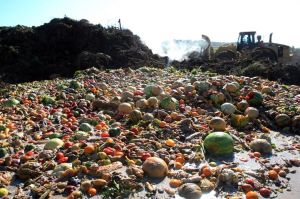 In Britain, over ten million families experienced the food problems brought about by World War 2. It was a time when the country was very short of food; a time we couldn’t import much food; a time when many foods (like meat, poultry, bacon & ham, eggs, sausages, butter, margarine & lard, sugar, tea, jam, and chocolate & sweets ) was strictly rationed (or not available) for both adults & children, so the amounts that whole families could enjoy was extremely restricted (fruit & vegetables supplies were severely limited – most children didn’t even believe in the existence of bananas!); it was also a time when the country had to be self-sufficient regarding food; it was a time when everybody with a postage stamp of land was growing vegetables (Dig for Victory); in those difficult times nobody wasted food; food was our lifeline, no less.

How the tide has turned eh? Seventy years on and in Britain food is now so plentiful, so available, so abused, so unappreciated, so disparaged, so imported, that we throw it away by the tons on a daily basis [nearly ten million tons a year] – most goes into landfill, further polluting our tiny island of course [a QUARTER of all UK’s food thrown away and half of that from homes!]. Even worse we have created a generation of obese kids who have no idea about their abuse of food, and are disgracefully brought up by equally obese parents, who have no idea either of how to deal responsibly with food.

Nevertheless, in any household there are bound occasionally to be some leftover food – especially if you’ve been having a party or entertaining or having a BBQ. Before you have a big do and serve food, it is always clever to think about how you can use up anything that isn’t eaten on the day. The first thing to think about of course is the actual type of food that you are going to be serving – make too little of the things that can’t be reused (often bakery items) in the following days (so that such food definitely all goes!), and rely on other stuff that can to give you all plenty to eat – part & parcel of this is to pre-plan how you can preserve anything left over (do you have sufficient room in the freezer/fridge or wherever?).

Luckily with normal daily meals you won’t get much leftover food – but if you do get a little, there is no reason to throw it, is there? It can be used – often in things such as soup, a single snack, lunch, dinner, or whatever. All you have to do is use a bit of ingenuity to make something tasty out of it – you don’t want, or need, to eat rubbish food just because it is leftovers, do you?

You can’t really have valid recipes as such, for leftovers, despite what you might read in some of the newspapers (because you can’t ever know what is left in advance!). BUT you can have ideas or food recipes at hand that can utilise leftover food. One of my favourites is fried rice because it is versatile & favourable to inclusion of little bits & pieces. Another is Biryani – a smashing way of using up left over rice & curry. Sandwiches & rolls are also a good way of using up bits as fillings. Boiled potatoes can be turned into potato salad or be sliced and fried in a little butter to make a smashing veg or tasty part of breakfast. Green veg, potatoes, parsnips & the like will make astoundingly good tasting bubble & squeak. Fillings for baked potatoes can be yummy. Quick & easy omelettes provide another versatile way of using some suitable leftovers (like cheese, mushrooms, tomatoes, bacon or ham, beans, onions or leeks, asparagus). You have some meat or chicken left over from the Sunday roast? Sliced cold meat, beans, tomato, picked onion, and salad or chips will satisfy anybody!

Cooked rice can be portioned & frozen for adding to soups or casseroles or serving. Noodles can go in a stir-fry. Cold pasta can become a super salad. Stale’ish ‘real’ bread can still be toasted, turned into breadcrumbs, or better still into scrumptious bread pudding. A bit of leftover homemade Sheppard’s pie makes a good snack with some baked beans or salad or a few chips.

[ASIDE: If you buy ‘ready meal’ curries instead of making your own simple curry, you are missing out big time! I’ll give you a secret tip! Thicken your curry sauce with boiled & then blended/mashed onion (if you are caught out though you can always add some ground almonds at the end to thicken the sauce to restaurant standards]

(using left over ingredients won’t destroy the taste. Quantities are for guidance only – simply adjust to leftover quantities you have!)

The beauty of this delicious dish is that you can adjust it according to what you have actually got to hand and it’s quick!

The basic food here would be an ‘egg fried rice’ without adding any meat or vegetables:

A marvellous Sunday evening snack (tastes even better if served in a Chinese bowl and eaten with chopsticks!)

Serve, garnish, eat (accompany with mango chutney and raeta if you can). LOVELY