Our Labour ex PM Tony Blair (ten years from 1997) is in the news again – pontificating on the current crisis in Iraq. What he has to say may well be valuable and right – but who wants to listen to him these days? Do you? Can any of us trust a word that comes out of his clever devious mouth? Whatever you think of the rights and wrongs of the Iraq war there is one indisputable fact isn’t there? It is that Blair pulled the wool over all our eyes – hoodwinked & conned the British public no less – to embark, without doubt on what has turned out to be a disastrous war for both the UK and the Iraqis themselves, all at the behest of his American mate George Bush. Blair abused the loyalty he had built up with our citizens to mislead us, and he now spends his days trying to defend his behaviour (and sadly find a role in life), but his name will go down in history in infamy. He should shut up surely? Some legacy he leaves.

This current situation begs the question though as to what ‘legacy’ some of our twenty first century prime ministers have left behind them doesn’t it?

Apart from PM Blair the other divisive one was of course Conservative PM Margaret Thatcher wasn’t it? From the ten years in power until 1990, the self styled ‘lady not for turning’ & ‘iron maiden’ has a seriously bad legacy to answer for surely? She is revered of course for the introduction of ‘right to buy’ or more accurately the fire ‘Sale of Council Houses’. So the working classes thought she was a heroine didn’t they? But did she actually do it for the people? We think NOT! It was simply a devious method of generating local government funds and gaining an electoral advantage. Most people don’t even realise it all these years later, but she has been directly responsible for destroying the UK housing market. Why? Because she would NOT allow Councils to use the money generated to build new council houses, so the stock simply went into decline. In the past it was the Councils that built almost all the houses and that has all stopped now hasn’t it? So if you or your family are waiting to rent a Council house, or even another property, or if you are desperately trying & failing to get onto the private housing ladder – just think of Thatcher and thank HER won’t you for all the problems? If you are wondering why this Country has no assets, no indigenous global industries like steelmaking & coalmining & shipbuilding, or why foreigners own everything around, or why your gas & electric energy supply & your water, is so expensive & controlled from abroad, look no further will you than Margaret and her drive for privatisation? While we might denigrate Blair over Iraq, most of us forget that it was ‘her’ that unintentionally signalled to the Argentina junta that we weren’t committed to keeping the Falklands British – leading to a war (expensive & far away) and horrific amount of killing to recover those Islands from occupation – got her re-elected though after we ‘luckily’ won, as a courageous women (with other peoples lives be it said?)!

Another PM who was undone by warmongering was Tory PM Antony Eden who embarked in the late nineteen fifties on a Suez escapade only for his duplicity to be exposed, leading to his legacy downfall.

We then had a bit of a saddo in Alex Douglas Hume who renounced his historic Lord’s peerage in the early nineteen sixties to be PM, but got scuppered by failing to keep his Defence Secretary Profumo fully focused on the military and not beautiful young sex prostitutes – so that (unfairly?) defined his legacy.

We had a bit of a loner misfit in Conservative PM Edward Heath who rather than a man of the people became a man ‘against the people’ in the early seventies, causing a working ‘3-day week’ in a vain attempt to curb the Unions – a sad legacy certainly.

Of course during the nineties we had nearly a decade of the so called, ‘grey man’ Conservative PM John Major, still well respected but with a legacy of being ‘weak’ [he would rather have his tormentors in his tent pissing out, than them outside his tent pissing in]. He could be forgiven a lot by most of us if he had not taken the Country into political union with the EU (without the consent of the UK’s peoples), AND destroying what was left of our national railway system, by a bizarre rushed privatisation.

Let us not forget though Labour PM Gordon Brown of only four years ago, showing us all, the results of triumph of ambition over ability. In truth an outstanding Chancellor, and useless Labour leader & PM. Given nowadays here widespread blame for the UK’s financial crisis. He came up with the plan to restore the Banks & Financial Institutions to health – taken up & copied by the other major countries no less. Instead of being rightly revered, with his legacy one of saving the financial systems of the World, it is one of failure and significant reinforcement of the iconic images of dour Scotsmen.

Conservative PM Winston Churchill ought to be mentioned here surely? He led this Country in the early forties throughout the dark days of World War II (and in peacetime in the early fifties) with unbelievable drive, panache and oratory. Despite his privileged background, excesses, and wavering party political allegiances, he has managed to remain perceived as ‘one of us’ by all and sundry – perhaps that is because there weren’t any speech writers, spin doctors, special advisors, personal assistants, focus groups, pollsters, make up staff, TVs, or auto cues, in those days? [He once said “You have enemies? Good. That means you’ve stood up for something in your life”].

[Perhaps Churchill is the only one of the lot that will leave a positive legacy as a British Prime Minister?] 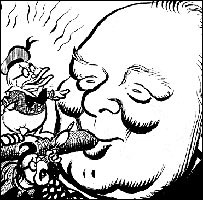