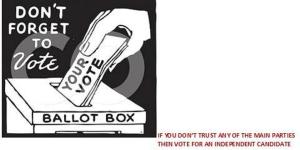 Well the news that there would be an unexpected by-election in Newark, within ‘God’s county of Nottinghamshire’, probably didn’t initially interest most of us – we don’t live there do we? The need for a new MP came about because the Conservative MP Patrick Mercer was caught out (BBC Panorama) surreptitiously taking money for asking parliamentary questions (oh no, he wasn’t banged up of course; no just ‘suspended’ from the House of Commons; here there is a lesson surely for all criminals – get elected as an MP before you offend!).

The by-election announcement hit the newsstands only because UKIP leader Nigel Farage was that very night questioned as to whether he personally would stand in that by-election – he said he would consider it. Obviously he knew nothing about the constituency. The next day he said he would not be standing and would concentrate on winning the European Elections only a few weeks away. The anti-UKIP media immediately tarred him with being a bottler unbelievably! The facts are that his party has NO CHANCE of winning this Tory seat – whatever you thing of Farage he is not an idiot nor indeed innumerate (a City wiz kid in his day no less). At the last General Election UKIP got less than 4% of the vote – with no local infrastructure it takes impossibly ‘more than a lot’ to win from that foundation, surely everyone realises that? The Tories had a sixteen thousand majority over Labour, LibDems came third, and UKIP languished in 4th with only a miserly 2,000 votes!

You will know that despite Labours good showing in the May local elections and holding their own in the EU elections, all the focus has been on UKIP. Why is that? It has been because they are the underdog; because they have been reviled; because they have come through & are seen as winners. Prepare to be shocked – they are NOT going to win in Newark!

The Conservatives, after Mercer’s decision to stand down, but before news of the by-election said that ‘In any event despite the Mr Mercer’s difficulties there is little doubt about Mr Jenrick’s election in Newark in 2015. The Conservative majority was 16,152 last time’.

Well, there is little likelihood of them being wrong about that in this earlier by-election is there? Oh yes, UKIP will take votes from each of the other parties (after all their star is in the ascendancy isn’t it?), and the LibDems will suffer another drubbing (with or without Nick Clegg in charge!). UKIP will get a respectable share of the vote this time round and could even come third – only to be slagged off by the media as ‘failures’ and ‘no hopers’ for next year’s General Election, don’t you think? Makes politics interesting for a change doesn’t it?

[If YOU are in the Newark constituency, whatever your political views, just vote for your preferred candidate on 5th June]