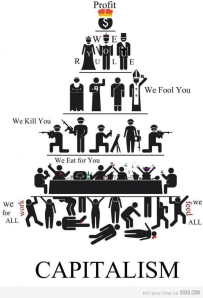 You may not have heard the church bell ring – the toll that announces death; perhaps it has simply fallen silent as it did increasingly in England from the 19th century. The cynical ones amongst us will link that will the rise of capitalism perhaps?

Capitalism can be likened to a society which deems success for a person as increasing weight constantly & as rapidly as possible – with total disregard for the vast amount of food that needs to be progressively more consumed! What will happen, the end result? The person will fall ill, be unable to live normally, and will eventually die of organ failure or a heart attack – if not dramatically explode!

So what is capitalism then? Well, it is the accepted economic system of the Western World, where the principle is that individuals are driven to make limitless financial profits by controlling businesses & trade. The goal is to accumulate as much money as possible (called capital) that you don’t need and cannot possible spend in your lifetime! The supposedly exciting thing about it is that you do this in a competitive spirit in a so called ‘market economy’ where you charge whatever you can get away with, and s mercilessly crew all the other players (sorry competitors). It is similar to the game of Monopoly, but where you get to destroy real peoples’ lives as well as buy land, property, utilities, transport systems, energy firms, and the like (you also get the opportunity to have a gamble or win money – if you break the few rules of capitalism you can even go to jail, but if you are a very successful player you will probably own a ‘get out of Jail free’ card!). The word capitalism is a misnomer – a simpler word to describe the system, and more accurately would be ‘greedism’.

Capitalism is based on a requirement for money borrowing and lending of course – when interest is charged. There used to be a saying in Britain “Neither a lender or borrower be” – a strategy long since defunct unfortunately. Historically, the Jews have always been good money makers  and active in the lending game – and consequently have suffered throughout history, as borrowers may rely on them but end up hating lenders. Christians have a poor background in the borrowing scenario. One religion that opposes the usury of lending is Islam.

William Shakespeare’s Hamlet..
Neither a borrower nor a lender be;
For loan oft loses both itself and friend,
And borrowing dulls the edge of husbandry.
This above all: to thine own self be true,
And it must follow, as the night the day,
Thou canst not then be false to any man.

How does capitalism work in practice then? Are you as capitalist a social philanthropist and so called ‘wealth creator’? Dream on everybody. Let’s say you own a business and you make something sellable, you employ 100 people, and make £1million this year profit (and have already a lifestyle to aspire to with more Champaign in your cellar you can ever drink). Next year though you have to make MORE profit under the system! Do you then employ another person and provide them & their family with a livelihood, or drop your prices, and as a result lose a bit of profit? NO! Or do you sack one person (the oldest most vulnerable one despite their needs & dependants), and then coerce the other 99 workers to produce more? POSSIBLY! Do you increase your prices, or shit on your suppliers, to increase your profits? IFYOU CAN! Explain that to your God, if you have one!

Within capitalism you get different sects of course (like in religion). So in England we have the Conservatives (the privileged & the ‘haves’ who are determined to keep it). These so called ‘right wingers’ are renowned for privatising the means of production & state owned assets, and contraction of the interests of the State – including hospitals and other health care, to the benefit of, and advantaged of, their private folks.

Then there is Labour (the disenfranchised & the ‘workers’ who are set on taking it off the employers & the ‘haves’, with a head in the sand history of preferring self destruction to defeat of the Conservatives). These designated ‘left wingers’ are accused of being the protagonists of ‘tax & spend’, and being economically untrustworthy.

Well behind is the Liberals, renamed ‘LibDems’ these days, (the liberty & ‘equality’ do-gooders who’s reported determination to empower the peoples doesn’t ever succeed, eh?). These political ‘middle-of-the-road’-ones with a philosophy & set of principles that they naively claim to be able to enact!

And then written in invisible ink, at the demand of the three main parties! we have UKIP (the protesters & the ‘European Union anti’s’ who are successfully promoting their cause by leading on our society’s immigration phobias, and who win massive prediction polls but have achieved little else so far!). These assumed ‘righties’ or ex Tory’s, throw-off brickbats such as ‘fruitcakes and closet racists’, and are despite policy defects winning support from right, left, and centre, by having a leader who is seen to be able to answer a straight question?

Can you trust any of them, rely on any of them? Dream on! The system they believe in, the system they rely on, the system they will protect with their lives no less, is to WIN their ‘game of life’ against all comers, put money (yours if they could!) in their bank account , acquire any personal capital they can against the odds, and above all survive in the jungle of politics at whatever cost to their electorate.

OK, if capitalism stinks, what else is there?

Well, what about Communism? Oh dear, the bell rang for that some twelve years ago didn’t it? The biggest, most powerful, dominant communist regime (aggressively influencing other minor World nations and creating major armed international conflicts), fell by the wayside apparently? That was Russia, if you were in doubt (oh yes, they are now trying like the phoenix to rise from the ashes, and may well invoke another major war no less!). They used to be fairly active in England and the Western countries (like America), but the collapse of Russia rained on their parade didn’t it?

What is communism then? Well, it’s all about the proposed  State power of the ‘working class’ (developed by a German guy – Karl Marx), and communities working together where the strong protect the weak, the clever help the foolish, the rich support the poor, the healthy care for the sickly. Sounds good. Sounds fair. Sounds magical. Oh yes, but it is a mirage. Why? Because of mankind’s greed of course. Those who organise those communist regimes are like the rest of us and still want to acquire wealth, power, and influence for themselves and their families, or indeed their friends, and certainly the ones who can keep them in post! The remaining communist ‘superpower’ is of course China. The World’s largest country and greatest growing economy – but one having abandoned its basic principles really and embarking on Western standards of ever increasing expansion based on ‘borrowed’ money!

This is despite the constraining ideology of a structure of common ownership of the means of production and rejection of class or dependency on money! Many economists say that China is rapidly heading for a fall (by massive over-spending on infrastructure as the rest of the World went into recession six  years ago). But as capitalist they would say that wouldn’t they – particularly as Marxist communism is the predicted order to succeed on the demise of capitalism?

[Recession is a term perhaps meaning that capitalism has crashed, and the economies involved aren’t growing like Topsy (someone who grows without control or intention)!].

What else has been tried? Well, there is Nationalism! Many of us might confuse normal patriotism with nationalism, but this is a political ideology where apparently an individual’s national identity becomes the sole driving social and political criteria motivating them. Often it is a strategy used by dictators to enforce allegiance to them personally and their cause – commonly employing speeches, and massed rallies, using emblematic tools such as songs, flags, special symbols, stories, language, and promotion of national pride. Items coming to mind might be the Roman Eagle, the British John Bull, the Nazi Swastika, the Russian Hammer & Sickle, Italy’s fascism fasces bundle of sticks, or even the historic but often employed raised clenched fist of defiance.

So where does all that leave us? Not in a good place it would seem does it?

[Capitalism is not only with us, but is growing like a cancer within all of the World. Without a cure it will be a killer and you can be sure of that! The worrying problem for us all (or the ones that care at least) is that nobody is even looking for a treatment – never mind a cure]