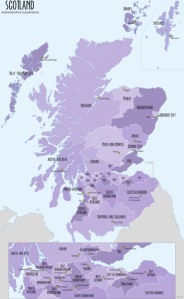 Scotland is embarking on a plan to regain its independence – the Scottish National Party (SNP) strangely wants to end the arrangement whereby they are ruled by the English. You have to feel really sorry for the Scots – especially today that of ‘Burns Nite 25th January. Apart from Hogmanay (New Years Eve), this is the one big night of the year for our northern brethren. This night is when Scots throughout the World gather together to dance, party, to remember and pay tribute to their so called ‘favourite son’ Robert Burns. Who then was this man so revered?

Rabbie (in Scottish) Burns was a renowned poet (called ‘bard’ in Scotland) who hasn’t been around for a long while – he died nearly 220 years ago (aged thirty seven)! He was admired for being a romantic in his prose, but most people have no idea about his verse, or have ever had the opportunity to appreciated it – his poems you see were written in a old broad Scots tongue and uses Gaelic words that require an accomplished interpreter to translate into modern English.

Why then all the fuss about him? Simple, he is all that the Scots have got left! He is the only thing that they feel they can boast about, look up to, or indeed justify their nation. How sad is that?

Isn’t it about time that the Scots did something for mankind – made some contribution? Or do they have history? A blacksmith (Kirkpatrick MacMillan) built the first mechanically-propelled, two-wheeled vehicle, to become the World’s greatest means of transport: James Watts built a superior steam engine: Macadam road construction method (John McAdam engineer): health of the World saved by Alexander Fleming’s discovery of penicillin: the discoveries of electromagnetics and other foundations of the World’s modern physics (James Maxwell): pioneer and significant contributor to the development of radar Robert Watson-Watt: worldwide diabetic lifesaver John Macleod Nobel Prize winner for discovery of insulin: the telephone invented by Alexander Bell (and other groundbreaking work in optical telecommunications, hydrofoils, and aeronautics).

The Scots have at times had a lot going for them. They had developed from a poor rural agricultural society in the 18th Century into a modern nation with tobacco, sugar, cattle, and textile trade, and then onto a significant .industrial & intellectual powerhouse. After WW II the English put a stop to that, as well as their marvellous ship building activities. They thought though that they had had a stroke of luck when they found North Sea oil & gas off the east coast, but the English have managed to snaffle the bulk of that [some fifty billion barrels – almost gone now but still worth a trillion pounds] – billions of pounds or revenue squandered by the UK Government, but the Scots are given their pocket money by the English Westminster Parliament.

The English like Scotland because they can go there to shoot all their grouse, stalk & kill the stags, hook the salmon, and collect lucky heather With luck they might well do a bit of mountain climbing, knowing that the Scottish Mountain Rescue teams are second to none.. The only drawback is that they have to drink the national drink Whisky; this is an alcohol that is often kept for 25 years – it is not clear if that is because there is no demand for it, or if it takes that long before it is drinkable (it then costs £350 a bottle!). Also, it is a good place to park English nuclear submarines, and fly around fast jets – safely all well away from inhabited England (particularly if there bases were attacked).

The Scots have been conquered, oppressed, had the shit kicked out of them by the English (over hundreds of years), and are now merely a demoralised, depressed community (with an over proportion of addicts) suffering from lack of ambition, and utter loss of self confidence. All they valued has been taken from them, and all they have left is a hazy figure of Rabbie the bard to hold onto – that one thing wasn’t stolen from them (because it wasn’t understood or wanted).

Over time the Scots got used to getting a good kicking – the Romans had a go and took over part of the country in the first century, before deciding a couple of hundred years later to duck back and build Hadrian’s Wall to keep the Scots out of England! The Vikings were then regular visitors, but not holidaying.

England started raiding Scotland from the days of Edward I, [the Hammer of the Scots] in the late 1200s, well before Cromwell invaded and took charge over 350 years ago (1650). Shortly after that the Scots finally lost their independence – in the early seventeen hundreds’ ‘Act of Union’. Rebellion was tried, but the final Jacobite revolution’s leader ‘Bonnie Prince Charlie’ got his comeuppance at the Culloden battle massacre (near Inverness in mid 1770) – before escaping back to France. After that it was all downhill for a while with the English clearing the Highlands with forced displacement of the population – so they could be used for sheep farming!

The Scots are unbelievably courageous fearful fighters with an unassailed reputation for putting their enemies to flight. How comes then that in numerous battles with the English (including Culloden) it was the Scottish forces that were annihilated? Straightforward that. The English were clever and devious enough to imbed fearsome Scottish clansmen into their own armies, so fearless Scots could be used to destroy their fellow countrymen! Smart, very smart.

Don’t worry that lesson has not been lost on the English. They will use the same technique to fight this current battle. They are employing Scots to thwart the campaign for Scottish Independence! The anglicised Scots politicians are on a mission to convince their fellow countrymen & women that they don’t have the right skills to run their own country, and so are dependent on English handouts to live, and muscle to survive in the modern world!

Alex Salmon (SNP Leader & Scotland’s First Minister) seemed to have brought some pride and confidence back into Scottish lives by heading a Scottish Assembly (with limited ‘delegated’ control from London) and successfully running affairs for the past seven years. But the Scots know their place – at the foot and under the heel of the English.

Is there any hope in Scotland? Perhaps! The Forth Bridge, a two & a half thousand metre long cantilever railway bridge from 1890 has been nominated as a World Heritage site, as something with outstanding cultural or natural importance – the result will be known next year. If inscribed it would be a celebration of Scotland’s incredible past engineering pedigree and ingenuity?

[There are five existing World Heritage sites in Scotland: St. Kilda a small, out-lying archipelago of the Hebrides islands in 2005: Edinburgh Old and New Towns together in 1996: the Heart of Neolithic Orkney including Maeshowe, the Ring of Brodgar, Skara Brae, the Standing Stones of Stenness and other nearby sites, in 1999: in 2001 New Lanark South Lanarkshire, a restored 18th century industrial cotton mill village constructed as an experiment in utopian socialism: The Antonine Wall, inscribed in July 2008 is the remains of a defensive line made of turf 20 feet high, with nineteen forts constructed after 139 AD, It extended for 37 miles between the Firth of Forth and the Firth of Clyde – a member of a series of sites existing in Austria, Germany and Slovakia entitled “Frontiers of the Roman Empire].

THERE IS NOTHING LIKE LIVING IN THE PAST IS THERE!