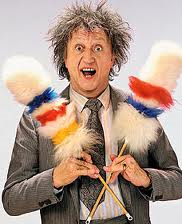 Ken Dodd is a well known British comedian. Many people may think he might be dead! But at 86 he is not only alive and well, but unbelievable he is still working energetically &  flat out and indeed touring UK theatres AFTER 6 decades! It isn’t clear if he has yet achieved his ambition of playing every theatre in the UK – but that was a very tall order and possibly a target too far eh?

This post is prompted by the 2014 New Year’s UK TV show on Channel 5 “An Audience With Ken Dodd”. This was a cut down version of the original long show (Ken is renowned for his four, five, six hour on-stage performances!). This ‘Audience’ (a single person responding to questions from their special audience) was originally given in 1994, but broadcast on TV before in 2011. It is unbelievably funny; his celebrity audience (well known show biz people in the UK included Samantha Fox ex-glamour girl, Molly Sugden actress, Frank Carson comic, James Fox actor,Warren Mitchell comic actor, Carol Vorderman TV presenter, Paul Daniels magician, amongst others) were for ever in stitches, some constantly crying with laughter, and no doubt some wetting themselves as the saying goes!

Most people reading this post will NOT have seen this TV programme, so will not have seen one of the greatest comic shows ever. BUT all is not lost – and that is the prime purpose of this post! If you can get British TV and have a computer you CAN watch it using the free ‘catch-up’ facility Demand 5. But hurry – it is only available until the end of January 2014 there. Get to it eh?

Ken Dodd is best known as a stand-up Theatre and TV comedian – but in fact he is much more than that! He is an entertainer, ventriloquist, actor, songwriter, and singer (some twenty singles in the 1960s and 1980s making the top 20 in the UK charts – including a number 1, as well as another in the top 10 in the USA<!). He also has written a book (‘Look At It My Way’).

Our Ken is an icon of showbusiness, and is the silliest clown in the book; he is also the funniest comic, telling one-liners like a machine gun (7 second titters as he would have it); he is well recognised by his frizzy hair and buck tooth grin, and constant trade mark prop of his so called tickling stick (a feather duster); people think Knotty Ash is his invented place – but actually it is real, and he was born there! He is the hardest working of all comedians – thought nothing of doing 150 shows a year.