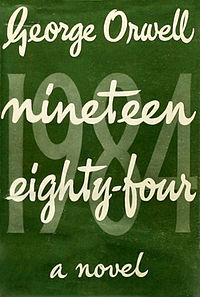 In British writer George Orwell’s classic book 1984 (published in the 1949) it is postulated that everyone has a secret fear – something that strikes sheer terror into the sole of their heart! In the book this fact is used by uncovering what that fear is – and then using it to torture the individual! (he was the one who coined the name ‘Big Brother’ in that novel!)

It is possibly quite a valid hypothesis, as most human beings indeed seem to have such a fear locked deep inside them – and no one knows about it (not family, not husbands, not wives, not workmates, not best friends, not doctors). It is always something never talked about, not admitted to, and rarely thought about – it is pushed to the back of our mind you see!

What is your clandestine fear then? Is it a fear of Rats? A fear of being trapped underground in a claustrophobic small tunnel? The fear of being engulfed by a landslide? Or a fear of being thought dead so being buried alive? A fear of the lift (elevator) hitting the ground as it races to the bottom floor in a high building – and get ready to jump if that happens (scientifically a waste of time!)? A fear of being overwhelmed by an avalanche? Perhaps the fear of being overcome by a monster tsunami? Perchance, your nightmare fear is being attacked by a killer shark at the seaside? Possibly you have a dark fear of being struck by lightning? Or does the buzzing of a wasp and the fear of being stung give you a panic-attack? You might though actually suffer from a phobia, but hopefully not – a fear and anxiety and take extraordinary lengths to avoid say birds, or mice, or snakes, or spiders, or water, or heights, or lifts? Or are you a sufferer of agoraphobia and fear going out or open spaces? Maybe however you are in fear of retribution by your maker (change your ways!)? Most such fears are but embarrassingly illogical, but they still make us terrified – that is why they cause us distress so are pushed into the hush-hush part of our consciousness!

But in life there are genuine fears that you should have! Most of us though simply get it wrong!

When you get in a car do you feel fear? Of course not – but you should! There are hundreds of accidents every day (in car parks, local roads, and motorways); a ¼ million people are killed or injured each year (some two thousand killed) in car crashes which includes getting on for three thousand children killed or injured); 7 or more people are killed in car crashes EVER day, despite the fact that we have halved such figures in the past decade, and we have an enviable track record, making us now the safest traffic country in the World! You assume you are safest close to home, and more at risk travelling at night – you couldn’t be more wrong! And beware even more if the driver is tired. [Still feel as safe?].

Are you frightened of the car you are in catching fire? Probably not – but you should be, but only a little bit! Cars are made of flammable and combustible materials, carry explosive fuel (which can leak), have electrical circuits that can short circuit, and have air bag detonators – all become a big risk in a crash. Nearly thirty thousand are killed in vehicle fires! These days the passenger compartment is well protected, so you can relax a little, but be vigilant! Two in very thousand cars get on fire – but the majority are arson (vandals, joyriders, criminals you see).

Bet you are a bit frightened of flying, or at least a bit apprehensive when taking off and landing? Well, you needn’t be – commercial flying is seen statistically as the safest means of transport! Bur rail is scary isn’t it? You read about all those train crashes in the newspapers and get really dreadful scenes on the TV (Hatfield, Paddington, and Southall)! No, categorically safe in fact (some twenty five times safer than road travel), and the crashes are so rare that is why they are so widely reported. What about getting on a bus or coach? That is pretty safe to – and always getting better, but they are also on the road and that can be scary (always use a proper bus or coach company that properly maintain their vehicles though!).

Traveling by boat is a bit risky isn’t it? The worst ever UK public transport disaster was the sinking of the Princess Alice at Woolwich by a steam coal carrying collier the Bywell Castle, with perhaps seven hundred perishing; the infamous unsinkable Titanic hit an iceberg and disappeared under the waves, with the loss of seventy percent of the passengers – over one and a half thousand lives taken (most the poorest travellers!) on its maiden voyage across the North Atlantic to America; a roll on-off car ferry the Herald of Free Enterprise capsized at Zeebrugge with nearly two hundred dead (the bosses escaped punishment as normal); a pleasure boat the Marchioness was run down by a dredger ship the Bowbelle on the Thames at night, with over fifty souls drowned (unlawfully killed – but no one brought to justice of course); and the Italian cruise  liner Costa Concordia ran onto rocks off Tuscany killing 32 people (Captain Schettino charged with manslaughter), simply showing off, to all accounts! Don’t worry nonetheless, the sea is a very safe passenger travelling method – those disasters happened in 1878, in 1912, in 1987, in 1989, and in 2012 (so you needn’t worry very much except if you are a working fisherman). What about getting on a motorbike then? Not for the fainthearted is it – some 150 killed per million miles, the highest vehicle rate (with today’s road traffic it is much safer being a motorbike racer on a track!). So you think you are safe as a mere pedestrian instead? Think again – 41 killed per million miles every year. What about a push-bike (the greatest invention perhaps – and most used in the World) to get around? Not really, only a little bit safer than being a pedestrian (Cambridge is one of the best places to be a cyclist, and London is a nightmare city with unsighted juggernaut lorries mowing down cyclists like ninepins!).

OK then, what if you stay at home? Not all that safe in reality – fifty die and thirty thousand have to go to A&E or GPs with injury in the home; about 50 thousand house fires kill nearly three hundred of us (about half due to gas, smoke, and toxic fumes), as well as some 11 thousand plus non-fatalities; fifty killed (and untold numbers hit with undetected illness!) by deadly gas carbon monoxide poisoning (faulty boilers, misuse of things like BBQs, etc.); people falling off ladders; kids tumbling out of high chairs; house glass related accidents. Children under 5 years are particularly at risk and danger from scalding, choking, falls, suffocating, and drowning – many permanently disabled or disfigured, and the most common reason for deaths amongst the youngest! Home based accidents never seems to get proper attention by media or authorities – it is a bit hidden you see, and no one is held responsible (or wants to be!).

[So what does all this tell you? Simple –that the modern world is a dangerous place to live (far safer living in past times despite marauding bands of invaders such as the French, Vikings, and Romans!]. Fear nothing then, but just concentrate on keeping yourself and your loved ones safe.