One of the Doha stadia 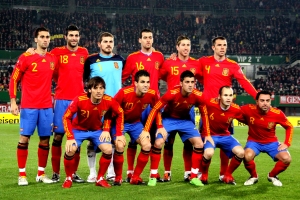 The football world was gobsmacked when three tears ago Sepp Blatter announced in Zurich that the 2022 World Cup (the 22nd) would be held in the Arab country of Qatar (Western Asia) – their bid had won the selection ahead of the real four favourites Australia, Japan, South Korea and the United States. No mentally fit person, unless drunk or on drugs, would have bet on such a result, despite the fact that the World Cup has never been held in the Middle East before!

The World Cup finals take place every 4 years, and are the most prestigious of all the professional football competitions, but it is awfully expensive to host; it is controlled by an international organisation called the Fédération Internationale de Football Association FIFA – with some 209 national associations as members (the powerful Mr. Blatter, a Swiss, has been its President for 15 years – winning 4 selections).

FIFA is not exactly a squeaky clean organisation however – it has a track record of suspected bribery & corruption in certain counties. Football is a big money enterprise, so there is plenty of scope for sleaze unfortunately. Some senior people have been ‘suspended or ‘resigned’ after coming under scrutiny! [Jack Warner of Trinidad and Tobago (Vice President FIFA) for example –resigned in 2011 – he was subject of a BBC Panorama TV exposé in 2010 (which probably killed-off England’s bid to host the 2018 World Cup!), but a subsequent official report also deemed him to have committed fraud (2013), and amongst the others: bin Hammam, a Qatari, a former President of the Asian Football Federation and FIFA executive].

Qatar, in the Persian Gulf region, may be a tiny state (only two million people – up from half a million, with many many migrants & ex-pats, three quarters of the population!), but it is an extremely rich one with a thousand of barrels a day of oil pouring out of its hundreds of wells (with fifteen billion barrels reserve!), as well as a colossal amount of natural gas (nearly ten thousand km squared reserves – five percent of the world’s total!). The capacity & opportunity for some clever underhand exploits, and other unscrupulous behavior, to win the Cup selection in such circumstances is obvious.

Did they buy the votes? There have been credible accusations of corruption in the bidding process – these are still being investigated! A person deeply involved in the Qatar bid, wished to be a candidate as the FIFA Presidency, Mohammed bin Hammam, but then he withdrew amidst allegations of buying votes. If not so why? As you would expect, Qatar and all individuals have denied the allegations and any impropriety!

You don’t have to be in the FBI to suspect therefore that ‘money talks’ and be suspicious how a seemingly ‘joke’ bid to host the competition, suddenly becomes reality, out of the blue, and by a massive vote margin (14 to 8 in the final round, with the USA loosing)! Qatar hasn’t even been good enough as a football team to be in the World Cup finals yet! They are now there as hosts.

Blatter has since admitted that perhaps it was a mistake to award the finals to Qatar!

So what is wrong with Qatar? You mean apart mean apart from it being a country that lacks some basic civil rights, like freedom of expression, and makes homosexually illegal (as it is in over seventy countries – mind you it was severely punished in England until the late 1960s!). You mean apart for it being an authoritarian state, with punitive responses to any dissent, and a society that intimidates the media (and will imprison journalists who offend)? You mean apart from the majority of their migrant people living in squalor, while the rich rulers live in opulence? You mean apart from UK newspaper allegations of immigrant Nepalese labourer slave labour (denied of course).

Well, there is another major problem that confronts the other football nations – it is bloody hot there (and sometimes times very cold – being a desert state it suffers from extremes of temperature!); hot particularly in summer daytime, when the temperature reaches over fifty degrees centigrade; there is also very high humidity, which makes the climate unbearable for foreign nationals – it is said that people have to RUN from a building (air conditioned!) to a car (air conditioned!).

The Cup traditionally is always held in the European football ‘off-season’ (June/July). However, it is now being suggested that the Cup should be moved to the winter for the 2022 competition, to provide better climatic conditions in Qatar – which would cause massive disruption to the football competitions in other countries!

The powers that be in Qatar say they will rely on technology (unproven as yet) to combat the harsh weather, and build solar powered air conditioning into their football stadiums (a dozen stadium in seven venues) – true they probably have the money to do so, but just how effective that will be for players and spectators is anyone’s guess!

Even if the venues do get sorted out what about the comfort of the visiting fans outside of the stadia? Those attending a World Cup want to do more than just watch the football – though that is their prime interest. They also want to travel in comfort, they want to see the Country, visit the sights, experience the culture, holiday, and above all party! Qatar is not geared up for ordinary holiday makers (it’s only a niche market for tourism!), is not renowned for its night life, and is not drinker friendly (football fans are particularly partial to their alcohol – and it is normally very restricted in Qatar, a strong Muslim community (some 80%). It has therefore a strong Islamic identity, still running Sunni law, though to be fair it has tried to modernised and become more liberal in the past twenty years (it is one of the few Arab countries to allow women to vote!). It tolerates other religions – mainly ex-pats of course.

Qatar hosted the Asian Cup two years ago, but achieved the unfortunate outcome of attracting the lowest attendance for a decade – are we going to risk a similar outcome for the 2022 World Cup?

[Qatar’s bid to host the World Cup finals was promoted on the basis of improving relations between the Arab world and the West – it is likely to do exactly the opposite!

Unfortunately, it is time for the Executive Committee of FIFA to re-hold the vote on the 2022 finals host (as is a popular proposal) – and that needs to be done sooner rather than later! But FIFA is ducking the issue – no surprise there then!]