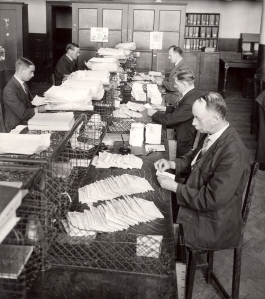 When it comes to the privatisation of our Public Assets, it is always the Conservatives that take the biscuit. They have screwed-up this Country time and time again. They dream at night about what they might screw-up next – for the rest of us we simply have nightmares about what they will get up to subsequently.

The big problem the Conservatives now face is that the Country doesn’t have much of value left! How are they going to get a good night’s rest?

They barge into these privatisations purely on a permanently ingrained political dogma that private is better than public. They unbelievably ignore their own tract record – all their privatisations have been a disgraceful catastrophe for the British people (the only exception is perhaps British Airways – but that is a specialised market).

One of the worst examples is their bodge-up of British Rail – which was indeed “getting there”. Conservative PM John Major was determined to get this invaluable state asset privatised, before he got thrown out by the electorate at the forthcoming General Election. His ill-considered and rushed move of the whole operation into private hands, has left us with a totally divisive and dysfunctional un-national rail service, which continues to cost us the taxpayer a fortune year upon year, and gives us an exceptionally bad & expensive service (and makes us the laughing stock of the World!). The only way back is to re-nationalise it!

Who is running our major Companies? Who is managing our premier Football teams? Who runs the Bank of England? Et al.

Well, now we have our respected and cherished Royal Mail, publically owned since the reign of Charles 1 (for some 500 years!), being hawked around at a moment’s notice by a desperate Tory Chancellor George Osborne to try and cover-up his dreadful economic failure with Plan A. Most people are against this, including the staff, who he was hoping to bribe by giving them ‘free’ shares (10%)! This will be the last of the great privatisations of our state assets, and even the prime architect of such privatisations, Margaret Thatcher, balked at including Royal Mail (she was not prepared to have the Queen’s head privatised!).

Osborne is rushing into an immediate 6 week ‘fire-sale’ (starting as early as 11 October 2013!), because the workers (Communications Workers Union) are balloting for a strike to complain about the privatisation – they know what will be the fate of the business and what will happen to the service when this goes ahead! Osborne is intent on it being in private hands before the result of the staff ballot is known, and no strike can happen before late October.

The Government will retain 38% of the shares (with 52% going to the market, so no overall government control!), but will they do anything, like a golden share, to protect the future of Royal Mail? Don’t hold your breath – Osborne and his crew don’t care. You can bet your bottom dollar that whatever happens in the initial floatation, Royal Mail will be in foreign hands within 5 years! You can also bet with complete certainly that there will be colossal price rises to consumers. You can also be confident that there will no longer be a unified price and service to remote areas. [You can expect the regulator Ofcom to subsequently remove, after privatisation, Royal Mail’s obligation to deliver post to every address in the UK six days a week].

The Labour Party are in favour of re-nationalising Royal Mail if they win the next election – but that WON’T happen (the leadership already admit that they won’t have the money!).

Royal Mail had the rug pulled from under their feet, when their 350 year monopoly was removed by the Labour government in 2006 – it was totally foreseeable and inevitable that other organisations would step in and cream-off the most lucrative and profit generating parts of the business, and NOT provide a national type service (warning were ignored by the government of the day). They had many rough and difficult years as a consequence.

Despite this, Royal Mail came through this and under Chief Executive Moya Green, have succeeded in now making substantial profits (over £400million in the past year) – quite sufficient to provide the necessary funding and investment for the future and growth.

Osborne will have a measly £ £3.3billion tops in his coffers after this (but spending over twenty million pounds in fees!), and he won’t lose any sleep over what he has done, either now or in the future (even when it becomes obvious what a disaster it has all been) – he is power mad and doesn’t care!

There will of course be a City frenzy to buy the shares, and despite the Government’s claim that the shares (260p – 330p) are NOT discounted, you can, without being a psychic, foretell it will be oversubscribed, so that the share price will rocket after floatation! Private investors will also be in there to quite a large extent, despite the lack of media advertising this time round, unlike say the Gas campaign twenty five years ago!). The Tory led Coalition Government are selling this public asset on the cheap

And the LibDems – what are they doing to save this great British Institution? Vince Cable, their powerhouse, is running the show for Osborne!
!

[Many many other counties have also privatised major companies and industries, but they also protect their country’s interest – just try to take over an American baseball team and see what happens, or interfere with France’s infrastructure!]