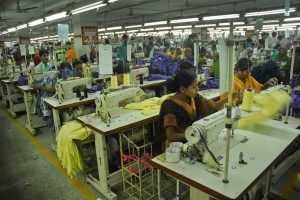 In the UK we enjoy the luxury of ‘cheap’ clothes. Almost all of them are not made here however – our manufacturing costs are too high compared with those of Asia! We enforce rigorous standards of safety and worker welfare here including hours worked and pay.

Do we ever think about this when we buy cheap clothes? Not much! We don’t know where these clothes actually come from. We assume that they are responsibly sourced because we buy them in renowned British High Street shops and they have famous labels in them as well.

The truth is that many of them are made abroad, under conditions that would appal us. Women, particularly mothers with young children, are grateful to buy cheap clothes in the High Street, but they would be mortified if they knew that they were being produced by affectedly ‘slave labour’ under very dangerous sweat-shop conditions.

The people in the UK are addicted to cheap fashion, and the fashion industry is a massive part of the British economy. Much of the fashion garments range is indeed designed in the UK, but the bulk of them are manufactured abroad – even the top brands. We have most major retail chains and brands implicated in the problem of conditions in which their products are produced – Primark (one of Europe’s biggest supermarkets), M&S, GAP, Tesco, Lotto, Walmart, Next, Lidl, H&M, IKEA, C&A, Edinburgh Woollen Mills, and CAN to name a few.

Why don’t all major retailers know about the environments under which their clothes are manufactured? Many of them impose a worthless Code of Conduct on THEIR suppliers when they place contracts – then they say its job done! But it ISNT! Such codes are simply ignored by the suppliers, and the UK retailers do NOTHING to ensure compliance!

Bangladesh (population 155 million), in South East Asia, is the country which is the biggest exporter of clothes worldwide, and is widely used as a source of supply by British retailers (and of course other Western counties including particularly America). Some of their manufacturing units are safe and modern – many others are not and lack even basic safety equipment. We regularly read in our newspapers and watch on television, distressing incidents of staff in such sweat-shops being killed in fires and other incidents. The death toll in fires (which reportedly occur frequently – 50 fires in 10 months apparently!) is very high. Often workers are ‘locked in’ by supervisors or security guards, during periods of working hours and if something bad happens they can’t even escape.

A deadly quick spreading fire in November 2012 (Dhaka) at the Tazreen Fashion (Tuba Group) factory killed at least 117 people and injured more the 200 – a suspected electrical fault on the ground floor of a 9 storey factory caused the fire trapping workers who were unable to escape through inadequate exits.

There was also of course a recent case of an eight storey building collapse (24 April 2013 Rana Plaza in the capital of Bangladesh Dhaka), which is deemed to be the worst such incident ever. Despite obvious cracks in the building, causing some businesses to close, the garment factory ignored warnings and carried on regardless – working conditions were atrocious at this factory (which like many such places had no permit – this building was not even suitable to house the machinery being used!). Workers (over three thousand!) were scared, but were  forced to come to work. Some 1,129 of them died that day.

[A disgusting fact is that the immediate United Nations’ offer of the help of expert rescue teams was rejected by the local authorities, and without doubt that decision would have hindered rescue attempts and certainly increased the death toll].

Western retailers rarely pay worker compensation after a tragedy, claiming ignorance over the circumstances under which their garment order had been produced (Primark DID pay compensation in this building collapse case).

Garment factory workers are not treated as human, are virtual prisoners, and often earn a pittance – sometimes as little as £1 per day or less. Some workers are pushed by the worst factories into working 19 hour days in shocking working conditions. The truth of the way the workers are treated is diligently hidden from the retailers placing the orders – often work is subcontracted from one factory to another. Factory management fiddle the timesheets to hide the hours worked (a widespread activity), and pretend they are complying with the agreed Code of Conduct (they keep two sets of records!). Nothing is done by our retailers to ensure their Codes are properly implemented.

This is an industry that puts profit and delivery timescales well before safety and their workers wellbeing, but the overseas government authorities do little to prevent that and the factories simply break the rules – harsh words and actions follow only after the latest tragedy.

Some million people are working in dangerous and illegal conditions.

It is therefore the clear responsibility of Western retailers to enforce their Codes of Conduct – all they do just now is rely on the factories to provide honest information (which of course they don’t and wont!). Some major retailers (like Walmart) even maintain pressure on suppliers to keep prices down and are prepared to ignore safety issues.

To uncover the truth the BBC simply investigated the situation and camped outside some of the factories for a few days to find out what was really going on – why couldn’t the big multinational retailers have done the same a long ago? Because they really don’t care?

Let us put a stop to this scandal once and for all.

Our garments may cost a little bit more, but at least we can sleep at night, and the clothes will come to us not at the expense of the lives of others!

[Watch the half hour 23 September 2013 Panorama (Richard Bilton) expose on BBC iPlayer yourself (available for 1 month after the transmission)  – and prepare to be shocked!]