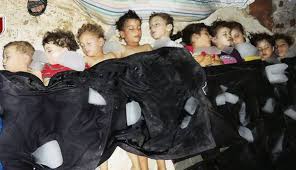 Over the past two years we all have seen TV interviews, heard radio interviews. and read in the newspapers reports of interviews withPresident Bashar al-Assad</The one thing missing is that NOBODY has asked him the pertinent question “By what right are you President of Syria;

After 2 years of the Assad’s regime’s slaughter of its civilians , some Western Countries including the UK and USA are preparing to take military action against them. All indications are that any action will be restricted to stopping the regime from using ‘mass destrudtion’ chemical weapons. Getting involved is a major decision and risk anyway, but if it has been deemed legal and necessary why are we not going the hole hog to stop the Assad’s destruction of his own Syrian people? Assad is of course only a figurehead of a cruel and  vile regime.

After our (risky) intervention we are saying to Assad that you can carry on the killings; – you can use your planes  and your helicopters to bomb with high explosives  the people or shoot them up; you can machine gun them with your troups; you can sniper shoot them; you can use your tanks and heavy guns  to blow them to smithereens and their buildings apart.

The slaughter can continue as before  – just don’t use chemical weapons any more  please. We won’t try to destroy your massive stock pile of chemical weapons because that could be a risky business!

There have been about a dozen chemical weapons attacks  so far – the latest one causing a thousand or more deaths including hundreds of innocent children – after a week of prevarication the UN weapon inspectors were supposedly given access, but then stopped by being shot at ( so the inspections will be too late!).

The UN are a disgrace.