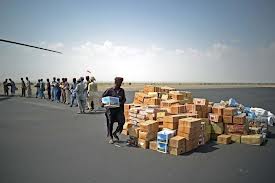 When this Tory led government got into power 3 years ago, rightly or wrongly it embarked on a strategy of austerity and massive cuts in expenditure. This unfortunately has driven national growth into the ground and the standard of living massively down – particularly affecting the poorest people in our society.

However David Cameron the Prime minister and George Osborn the current Chancellor made a obscure decision in such circumstances to actually increase the overseas aid budget for the Department for International Development. So we are driving large sections of our population into poverty while increasing the monies we give away to foreigners (£6.65billion in 2009/10). The aid is going to increase by a third. What kind of madness is this? It is all about Cameron wanting to be seen as a ‘good guy’ on the world stage! He is committed to giving away £30 billion pounds of our money over the next 2 years – including over £300million into Africa.

Clearly it is commendable to try to help other poor counties and provide them with much needed cash – in good times this charitable outlay is fully supported by the majority of the British population. But we are not in good times, we are in bad times! The public do not support this way of spending tax payer’s money. We even send aid to China, the second largest and highest growing economy in the world. This expenditure is out of order.

The biggest problem with all of this is that much of the money is wasted and ends up in the pockets of individuals and doesn’t get to the people intended (probably well under 20%). Anyone who has worked in developing country will tell you that corruption and fraud is rife and funds are quickly diverted to the powerful people’s bank accounts – not used for building schools or community infrastructure or drilling wells or education projects. We don’t even try to assess the way our money is spent. Government claims of controlling waste are a fantasy, and there is evidence of inadequate bookkeeping and lack of appreciation of the high levels corruption involved in delivery of aid.

What control does our government have over the funds released as overseas aid? Not a lot. For a start we give a large amount through the European Union – who spends a budget of over E850billion (over the past 5 years) willy-nilly without any real concern. What a waste. Counties use it for things like building their posh marinas or buying arms, not to help the poor!

We have been handing money hand over fist to India, a country with deep rooted poverty, for many many years, (and somewhere over one and a half billion pounds over the next couple of years), (and as well Pakistan £665million over 4 years as well as debt cancellation, when they spend more than a thousand billion pounds on their military ever year!). Why? India is a country with a caste system that disenfranchises the poor and vulnerable, who have to live in the slums of places like Mumbai.

India is rapidly becoming a ‘rich’ country, full of rich people (150 thousand millionaires, owning luxury cars like Rolls Royces, Ferraris, Aston Martins and Land Rovers) who milk the wealth of their country. They already have some hundred million pounds in Swiss bank accounts. Indeed India gives out aid to other countries (so we give them money and they pass it on and we have no say in that)! They even run a major space programme, including putting astronauts into space, costing billions of pounds and have developed nuclear weapons (annually spending over twenty billion pounds on defence – and we send them overseas aid to the tune of billions of pounds! It is surely insanity? It is a breach of trust by our government.

We have also helped South Africa which sounds like a worthy cause –but we have recently withdrawn further aid for some reason.

Apart from our aid, when there are disasters overseas the British public rally round and dig deep into their pockets to raise many millions of pounds to help. Once again a large proportion of this doesn’t reach the impoverished people – it is stolen or frittered away on unrelated matters. Sad.

It is a bizarre mystery why our government is intent on spending our money on foreign aid – it doesn’t go on famine relief and saving the life of children, but supposedly development and country prosperity (whatever small proportion actually gets there). There is little evidence that our aid does any good. – and probably undermines good government in those countries.

Complain to your MP

2 thoughts on “Overseas Aid – A government out of Touch?”