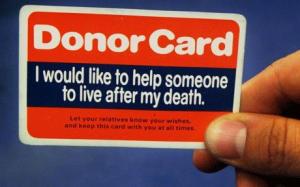 In the UK we have a major problem with organ transplant. There are just not enough human organs available to the surgeons for transplants. Why is this? Because people who die and have ‘reusable’ organs aren’t able to donate them to a living person in need (some 3,000).

The biggest breakthrough in organ transplanting was the first human heart transplant performed in Cape Town South Africa by Christiaan Banard in 1967. It was totally unexpected by the world and somewhat controversial at the time, with many people saying it was a step too far. This was followed only a few days later in the USA by Norman Shumway, who became most  renowned in this field. (but not a name known by the public). The first recipient Louis Washkansky, who had suffered severe heart failure, and though the operation was deemed successful, he only survived 18 days before dying of pneumonia. In our time the operation is now fairly commonplace around the world (three and half thousand per year!) and survival of individuals averages 15 years,. The operation definitely saves lives and gives seriously ill people a much improved quality of life.

Since those distant days, there are many other human organs that can now be routinely transplanted – kidney, liver, lungs, pancreas, intestine, (hands, limbs, stomach and face have also been tackled). The main problem with such transplants is ‘rejection’, as the body can recognise a foreign item and try to get rid of it – drugs have been developed to overcome this immune system defence, but unfortunately that also makes people susceptible to other life threatening illnesses!

The biggest setback in replacing a failing organ is the availability of a healthily organ from a donor – in the UK these are ‘gifted’ (mostly of course dead people, but kidney is often donated by a relative because we all have two in our body and only ‘need’ one).

Not all patients are though suitable for transplants, as other health problems can influence the situation. Surgeons try to match donor blood and tissue with the patient to reduce the risk of rejection. Many people die (some 1000) while still on the waiting list waiting desperately for a suitable donor organ.

The first problem is that the UK current law does not allow the person’s wishes regarding the transplant of their organs to be heeded. Often relatives overrule the person’s commitment to allow transplants (expressed in carrying a donor card) and then refuse permission for organs to be taken. These are not evil people, but they are faced with a very difficult decision at a time of extreme stress when their loved one is dying or just dead. Relatives are concerned about invasion of the body, but don’t have a say if a Coroner decides on the need for an autopsy because that is the law – and you can’t get more invasive than that!

The answer is that the person’s wishes should be respected and not overridden by their next of kin – that is what the law need to be.

If anybody has been in a situation where their young son or daughter or close relative has been close to death, say involved in an accident or suffered brain damage, the question in the mind  then is would you agree to organ transplant, or not (as you know you are going to be asked)? If people were thinking straight they would agree to donate organs, but emotions take over. Then dead the person will be buried or cremated – either way, their reusable organs will simply rot away or be incinerated. What a waste. These organs can save someone’s life – most often a desperate deserving person living under a sentence of death by illness. Where is human compassion here?

Should the State intervene in the situation to save lives? Almost certainly. Wales has now decided to enact a law to ‘presume consent’ of all individuals to their organs being used for transplant on their death (unless they specifically ‘opt out’). Will this work? Unlikely, unless it cannot be overridden by relatives. Is it right and proper? Probably not. Many ‘do gooders’ will fight against it’

What is required and would meet the needs of society is for everybody to be required to record YES or NO to their organ transplant on death. This would be best and easiest done through medical records – most people are registered with a Doctor and it could be a requirement to lodge your wishes (simply tick a form chosen box!)

Many ordinary people think that what the Welsh are doing is right. Will we do anything in England? Don’t hold your breath! NO. Our uncaring government don’t plan to do ANYTHING. Why? Because MPs are only concerned about trying to increase their salary! Sod the ill and needy. It doesn’t really affect them so why should they bother.

Can YOU do anything? YES. Arrange a meeting with your own MP, or ring them up, or write to them and ask them to get off their arse and help the people dying unnecessarily.