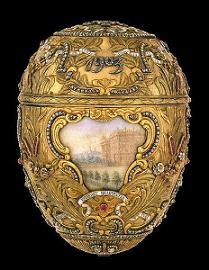 The so expensive ‘Winter’ egg The ‘Alfred the Great’ egg

But nobody knows what Easter is all about – apart from a few doddery old folk who were properly brought up as Christians. Even then they probably only have a vague idea, but simply know it is to celebrate the resurrection of Jesus Christ.

The strange thing about Easter is that it moves around like a wandering nomad. You probably need a degree in astrophysics to understand how the date is worked out – anyway it can be somewhere between March 22 and April25 in the West OR April 4 and May 8 in Eastern places, and it is officially the Sunday though in Britain we make a long holiday weekend of it (Good Friday, Saturday, Easter Sunday, Easter Monday).

Easter is preceded by Lent, a Christian 40 day period of fasting – but not very popular that one (Muslims are better at it maybe with their Ramadan). Church services are popular at Easter together with family gatherings and gifts (even for non-Christians). Easter is also associated with the Jewish festival of Passover (that celebrates the end of enslavement by the Egyptian pharaohs).

A year wouldn’t be the same without the ‘Easter Egg’! These special eggs (mostly chocolate these days) fill or shops before Easter (unbelievably ‘well before’ in some cases) and for Christians have a symbolic function, and for the rest to celebrate Springtime (but there hasn’t been much of that yet in 2013).

A decorated egg is an ancient practice representing fertility & rebirth, with ostrich style eggs in gold & silver being placed in graves five thousand years ago – the use of the egg in Christian practice is only about four hundred years old though.

The most expensive egg around is most likely a jewelled Easter egg, the Winter egg, completed in 1913 by a Russian jeweller Faberge, with a value of ten million dollars (thousands of diamonds though) – so no point in moaning about the price you paid in the high street for your chocolate version this year!

Those people who want England to become a secular society need to realise that the Christian public holidays of Christmas and Easter account for 4 days per year out of a total of 8 days (and most firms give even more holiday at Christmas) – so think about it!

One thought on “Easter – wots that?”