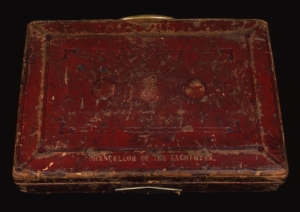 Will austerity force Osborne to sell the new Box and revert to the original?

THERE IS NO TRUTH WHATSOEVER IN THE FOLLOWING RUMOURS!

Leaks
George Osborne got so emotional while he was working on next week’s budget (Wed 20 Mar), because of the misery his austerity measures are and will have on the poor, that he cried so much that his tears filled his red Budget Box (it is not clear if they were tears of happiness or not). He didn’t realize that his Budget Box leaks, so all his budget papers on his desk got water damage and were useless. The Chancellor has got a meager memory and a bad head for figures, so he was pretty well stuffed about resurrecting his Budget.

He was told by officials that urgent ‘recovery’ was required, but he didn’t fully understand that word – anyway he worked-up some new ideas. It should be noted that these do not constitute a Plan B. There can never be such a plan because Osborne had never learnt his alphabet when he was a child and his nanny only taught him the letter A. As he got an unimpressive degree in History from Oxford University and knew nothing about finance or business, he was an ideal choice for Chancellor of the Exchequer by David Cameron, because he took-on the job with no preconceived ideas about how to run an economy [the appointment was an astute one for Cameron as it not only repaid his mate for getting him elected as Leader of the Tory Party, but it also meant that his Chancellor was as out of his depth as he was himself, so he couldn’t be upstaged].

George finally got the message that revenues from taxes actually had to be greater than expenditure for the deficit to be reduced (not the other way round), as he had been going in the wrong direction all along, and the Cabinet had had to agree to lie about it.

He has come up with some novel methods though of raking the money in:

In all Budgets there has to be a few naughty things to bring a bit of cheer to the country – Osborne’s 2013 Budget will be no different:

Following last year’s fiasco when everything was pre-publicised (like they do on the soaps) and then budget proposals ended up very smelly, the Treasury are keen to prevent leaks and bad decisions, so are taking advice from Dyno Rod.

The Treasury cannot confirm how many people are tripped-up by the ‘exceptions’ noted above. However, we have positively identified one person, a certain D. Miliband, who falls into the declared category.