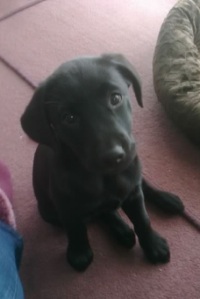 I have a dog. I’ve almost always had a dog. My current dog is a Labrador – she is still a puppy. She is very wilful, very wily, and a bit naughty at times, but lovely with it! [my wife has nicknamed her ‘she-devil’]

Why do we love dogs? Well, dogs have been with man for a long time – domesticated some 15K years ago. Dogs have aided man in many roles including hunting, herding, guarding etc and more recently helping handicapped people – hence the tag  ‘Man’s Best Friend’

There are some 10 million dogs in the UK and most of us these days keep dogs at home as companions (meaning pets) and part of the family, as opposed to working dogs (though there are still many of those).

Britain has in the past revelled in the description ‘A nation of Dog Lovers’, but is that true today? Perhaps not. There are vast numbers now of neglected and unwanted dogs in the country which suffer dreadfully or end up in Death Row dog pounds, abandoned and discarded by their owners. Some ten thousand dogs are put down a year – a dog is executed by lethal injection ever hour. Over breeding is a significant factor, while irresponsible dog ownership and high vet fees also play a big part. We are in danger of being retagged as a ‘Nation of Dog Abusers & Killers’

Owning a dog is a huge responsibility and before taking on a dog everything must be properly thought through. Financially, owners need be able to afford the extra cost to pay for food and vet care. Dogs also need exercise, attention and company. Owners’ circumstances can change but it is not morally acceptable to then get rid of the dog – it has to become an important member of the family.

There is of course the scandalous treatment of ‘working’ dogs – typified by the treatment of greyhounds where the majority have a short, miserable life followed by a brutal and needless death with a bolt gun. Every year some 30,000 are bred to race, but only 15,000 are registered. No one knows what happens to the other 15,000! In the case of foxhounds it is calculated that in excess of 5K dogs are deliberately killed off by UK Hunts each year!

Some home owned dogs are not kept as pets but as ‘weapons’ of status, and some dog breeds have become the victim of such macho would-be ‘hard men’ of today’s society who use their dog as a tool to boost their inflated, ambitious egos. Dogs are being treated for stab wounds because youths are using them as weapons, The animals are also being treated for injuries such as cigarette burns and broken bones amid an increase in reports of street fighting. Two-thirds of reports of dogs fighting are linked to young people using them as weapons.

It is the responsibility of the Government to take the dog problem seriously in this country NOW and introduce urgent new measures:

You can help by lobbying the Government (writing to David Cameron), and also your own local MP urging them to take the necessary measures to stop the appalling and unforgivable carnage of thousands of dogs in the UK.